572 – Alboin, King of the Lombards, last of the line of hero-kings who led his people in their migration to Italy, is assassinated in a coup d’état instigated by the Byzantines, his foster brother, and his wife, whom he had forced into marriage with him. The coup fails because of opposition by the majority of Lombards, who elect Cleph as Alboin’s successor

Alboin King of the Lombards – from the Nuremberg chronicles

1360 – Muhammed VI, ‘El Bemejo’ (Red One, for his red hair) becomes the tenth Nasrid king of Granada after killing his brother-in-law Ismail II

1444 – Charlotte, Queen of Cyprus, born, the eldest and only surviving legitimate child of King John II of Cyprus. She was married to her first husband at the age of 12, but he died the next year. Her father died when she was 14, and she succeeded to the Cypriot throne (1458-1463). Her reign was plagued by the machinations of her illegitimate half-brother James, who constantly challenged her right to the crown. In 1460, James gained the support of the Egyptians, and blockaded Charlotte and her second husband in the castle of Kyrenia for three years before they were forced to flee from Cyprus in 1463. Charlotte died in exile in Rome in 1487

1461 – The coronation of Edward IV, first Yorkist King of England

1519 – Charles V is elected Emperor of the Holy Roman Empire; also head of the Romans, of Italy and of the Spanish Empire, a domain spanning nearly four million square kilometers – the first described as ‘the empire on which the sun never sets’

Venus at the Mirror, and Self-Portrait, by Peter Paul Rubens

1703 – John Wesley born, English cleric and theologian; co-leader of the Methodist movement, but he remained within the established Church of England throughout his life; during his time in America, he published  Collection of Psalms and Hymns, the first Anglican hymnal published  in America, and the first of many hymn-books he published

1709 – Peter the Great defeats Charles XII of Sweden at the Battle of Poltava, the beginning of Sweden’s decline as a great power. Charles and his ally, Hetman Mazepa, managed  to escape capture 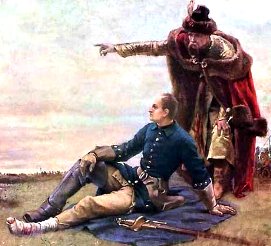 1712 – Jean-Jacques Rousseau born, Swiss-French author-philosopher, whose philosophy, most notably his Discourse on Inequality and The Social Contract, influenced the Enlightenment across Europe

1776 – A small band of South Carolina patriots defeat the British Royal Navy in the Battle of Sullivan’s Island; commemorated in South Carolina as Palmetto Day *

1778 – Mary “Molly Pitcher” Hays McCauley, wife of an American artilleryman, carries water to soldiers during the Battle of Monmouth. Legend says she took her husband’s place at his gun after he is overcome with heat

1865 – The Union’s Army of the Potomac is disbanded

1867 – Luigi Pirandello born, Italian playwright and author; 1934 Nobel Prize for Literature; Così è (se vi pare) (Right Your Are – If You Think So), Sei personaggi in cerca d’autore (Six Characters In Search of an Author)

1876 – Clara Maass born, American nurse, contract nurse for the U. S. Army during the Spanish-American War and in the Philippines; went to Cuba to assist in the research into yellow fever, where she volunteered to be infected and subsequently died

1891 – Esther Forbes, American author and historian; Pulitzer Prize for Paul Revere and the World He Lived In and the Newbery Award for Johnny Tremain

1894 – Dame Anne Loughlin born, British labor activist, organizer and journalist; member and organizer for the National Union of Tailor and Garment Workers (NUTGW). In 1916, at age 22, she was in charge of a strike of 6,000 workers in the wool trade at Hebden Bridge in West Yorkshire. In the 1920s, she was writing articles for the union paper, The Garment Worker. She moved into the union’s top leadership during the 1930s. In 1939, she was appointed to an advisory panel for the production of army clothing, and served on the Ministry of Labour and National Service subcommittee on the wholesale clothing trade. In 1942, she was elected as chair of the General Council of the Trades Union Congress (TUC) , the second woman chair after Margaret Bondfield, and the first woman to preside at the annual conference. She was made a Dame of the British Empire in 1943, and served on the Royal Commission on Equal Pay (1944-1946), dissenting from the Commission’s report which argued that introduction of equal pay would have a destabilizing effect.  She was elected as the secretary of the NUTGW (1948-1952), when she retired due to ill health

1895 – The U.S. Court of Private Land Claims rules James Reavis’ claim to Barony of Arizona is “wholly fictitious and fraudulent”

1905 – Ashley Montague born in the U.K., American anthropologist; studies of relationship between race and gender to politics and development

1906 – Maria Goeppert-Mayer born in Germany, American physicist; in 1939 she worked at Columbia University on the separation of uranium isotopes for the atomic bomb project. In 1949, she devised the shell nuclear model, which explained the detailed properties of atomic nuclei in terms of a structure of shells occupied by the protons and neutrons. Co-recipient of the 1963 Nobel Prize in Physics; second woman to win the prize in physics after Marie Curie, for proposing the nuclear shell model of the atomic nucleus

1907 – Yvonne Sylvain born, first Haitian woman doctor; first woman accepted into the University of Haiti Medical School, earning her medical degree in 1940; specialist in obstetrics and gynecology at Port-au-Prince General Hospital, who campaigned for improved medical access for the poor; member of Ligue Féminine d’Action Sociale, which campaigned for women’s suffrage (won in 1950), and spoke out for civic, social, and economic equality for Haitian women

1926 – Mel Brooks born, American comedian, a pioneer in television comedy and satire, screenwriter, producer, director and actor; winner of the 2013 AFI Life Achievement Award, one of the few to win an Emmy, a Grammy, an Oscar and a Tony

1934 – Bette Greene, American author; known for Summer of My German Soldier, and her Newbery Honor Book Philip Hall Likes Me, I Reckon Maybe

1948 – Deborah Moggach born, English novelist and screenwriter; best known for her novels Tulip Fever and These Foolish Things, which was the basis for the film The Best Exotic Marigold Hotel, and her screenplay for the 2005 film of Pride and Prejudice

1950 – North Korean forces capture Seoul, and they launch the Seoul National University Hospital Massacre, killing over 900 medical personnel, civilian patients and wounded soldiers, after wiping out a platoon guarding the South Korean hospital. This is in retaliation for the Bodo League massacres of over 150,000 Communists and suspected Communist sympathizers. The league’s founders are Korean jurists who collaborated with the Japanese during WWII

1956 – Poznań Remembrance Day * – In Poland, the Poznań protests are the first of several massive protests against the communist government of the Polish People’s Republic. Demonstrations by workers demanding better working conditions began on 28 June 1956 at Poznań’s Cegielski Factories and were met with violent repression. There were hundreds of injuries, and at least 60 deaths, including a 13-year-old boy. In 2006, on the 50th anniversary of the protests, the Sejm (Polish parliament upper house) declared June 28 a national holiday in Poland 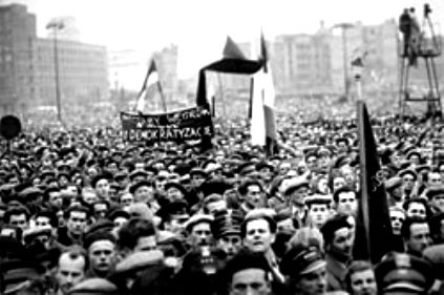 1956 – Amira Hass born, Israeli journalist, columnist and author, recognized for her reporting on Palestinian affairs in the West Bank and Gaza; her reporting and criticism have caused her trouble with both the Israeli government and Hamas

1958 – Donna F. Edwards born, American Democratic politician and community activist. In 1990, she was the co-founder and first executive director of the National Network to End Domestic Violence, a network of over 2,000 member organizations, and worked to pass the 1994 Violence Against Women Act. She was the first African-American woman Representative from Maryland in the U.S. House (2008-2017), and ran unsuccessfully to replace retiring Maryland Senator Barbara Mikulski in 2016. Currently co-chair of the progressive group Health Care Voter

1969 – Stonewall Day * – At 3 AM, yet another police raid on the Stonewall Inn, a gay club in Greenwich Village, erupts into an uprising of patrons with a crowd of locals gathered on the street, fed up with police targeting gay establishments, many of which had already been closed. Days of protests follow – sparking the LGBTQ civil rights movement. On June 28, 1970, the first Gay Pride parades took place in New York, Los Angeles, San Francisco and Chicago on the Stonewall anniversary. The Stonewall Inn was listed as a National Historic Landmark in 2016

1976 –The first official woman cadets arrived at the U.S. Air Force Academy in Colorado Springs CO; an unheralded “test group” had begun training months before to see how “a small number of women would fit into a masculine situation and how those women would retain their femininity,” according to Air Force General James McCarthy, years later when the story came out 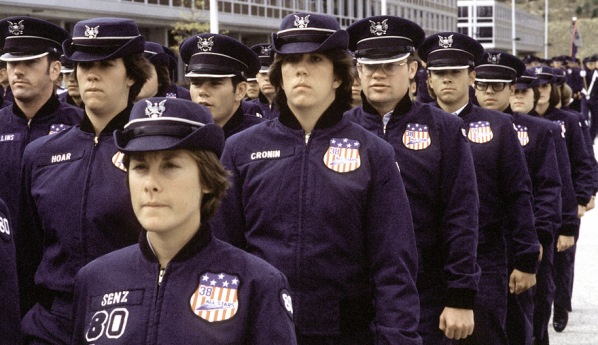 U.S. Air Force Academy Class of 1980, the first class to include women cadets

1987 – Iraqi warplanes target civilians in a chemical bombing attack on  the town of  Sardasht, in northwestern Iran

1989 – On the 600th anniversary of the Battle of Kosovo, Slobodan Milošević gives the Gazimestan speech at the site of the historic battle

2000 – U.S. Supreme Court rules in Boy Scouts of America v Dale that the BSA can bar homosexuals from serving as troop leaders

2004 – In Boumediene v. Bush, U.S. Supreme Court rules 5-4 that enemy combatants can challenge their detention in U.S. courts; Lakhdar Boumediene, a naturalized citizen of Bosnia and Herzegovina, was being held in military detention at Guantanamo Bay

2007 – The American bald eagle is removed from the U.S. endangered species list

2010 – The U.S Supreme Court rules 5-4 in District of Columbia v. Heller that the Second Amendment provides Americans a fundamental right to bear arms that cannot be violated by state and local governments, the first time the court said there is an individual right to gun ownership rather than one related to military service

2016 – Chinese President Xi Jinping began a 3-day trip to Hong Kong, his first official visit, to mark the 20-year anniversary of the British handover of Hong Kong to China; security for the Xi was described as “unprecedented” and protestors were quickly arrested on public nuisance charges

Nona Blyth Cloud has lived and worked in the Los Angeles area for the past 50 years, spending much of that time commuting on the 405 Freeway. After Hollywood failed to appreciate her genius for acting and directing, she began a second career managing non-profits, from which she has retired. Nona has now resumed writing whatever comes into her head, instead of reports and pleas for funding. She lives in a small house overrun by books with her wonderful husband.
View all posts by wordcloud9 →
This entry was posted in History, Holidays, On This Day and tagged Amira Hass, Ashley Montague, Clara Maass, Donna F. Edwards, Luigi Pirandello, Paul McCartney, Yvonne Sylvain. Bookmark the permalink.
Loading Comments...
%d bloggers like this: