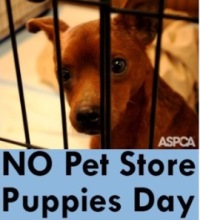 356 BC – The Ephesus Temple of Artemis, one of the ancient world’s Seven Wonders, is destroyed by arson fire set by Herostratus, the first recorded person to commit a criminal or evil act to gain notoriety. His name becomes a metonym (synonymous for an act or idea, like Benedict Arnold for traitor) of his time 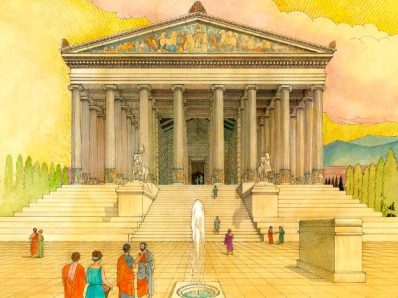 Artist’s conception of the Ephesus Temple of Artemis

365 – In Alexandria, Egypt, and much of the surrounding area, thousands are killed by a tsunami from a 8.5 earthquake on Crete. Nearly all the towns on Crete are destroyed, as the island is forced upward by almost 30 feet (9 metres)

541 – Emperor Wen of Sui born, founder and first emperor (581-604) of China’s Sui dynasty. As a Buddhist, he encouraged the spread of Buddhism.  He reunified China in 589, after centuries of division since the fall of the Western Jin dynasty in 316, and during his reign the construction of the Grand Canal began

1030 – Kyansittha born, King of the Pagan dynasty of Burma (now Myanmar) from 1084 to 1112/13. He is considered one of the greatest Burmese monarchs. Kyansittha continued the social, economic and cultural reforms begun by his father, King Anawrahta. The Pagan dynasty became an internationally recognized power during his 28-year reign, and the Burmese language and culture continued to gain ground 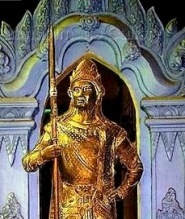 1403 – The Battle of Shrewsbury is waged by the army of Lancastrian King Henry IV against a rebel army of Harry “Hotspur” Percy of Northumberland; the King is victorious, and the Percy rebellion is crushed. Shrewsbury is the first battle in which English archers are used by both sides, demonstrating the deadly effectiveness of the longbow

1588 – At daybreak, the English fleet, which maneuvered upwind during the night to gain the weather gage (a significant advantage) engages the Spanish Armada off Plymouth near the Eddystone Rocks. The Armada maintains a crescent formation, with galleons and great ships at the center and tips of the crescent’s horns. Sir Francis Drake leads the attack from the north, while Charles Howard comes from the south with the bulk of the fleet, both groups using their superior speed and maneuverability to stay out of range of the Spanish grappling hooks. But the English cannon are ineffective at that range, and darkness falls, ending the first day in stalemate 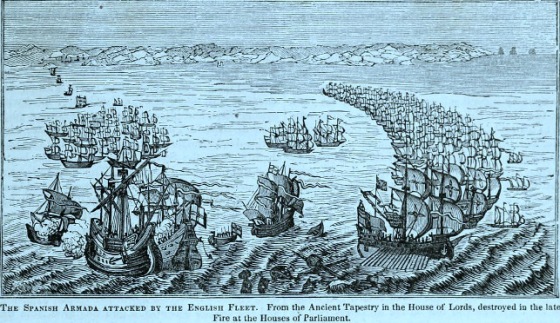 1620 – Jean Picard born, French astronomer and priest, the first person to estimate the size of the Earth nearly accurately, by measuring one degree of latitude along the Paris Meridian along 13 triangles, stretching from Paris to the clocktower of Sourdon in the Hauts-de-France region 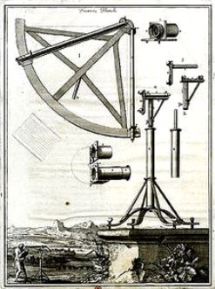 1653 – Sarah Good born, one of the first three Puritan women accused of witchcraft and executed during the Salem witch trials

1656 – Elizabeth Key Grinstead wins her lawsuit, gaining freedom from slavery for herself and her baby son with the argument that her father was an Englishman and she is a baptized Christian. The Virginia House of Burgesses later passes laws that the status of children will follow that of the mother, not the father, abandoning English Common Law, which determines a child’s status based on the father, for the Roman partus sequitur ventrem, based on the mother’s status, which condemns all children born of enslaved women in Virginia to slavery 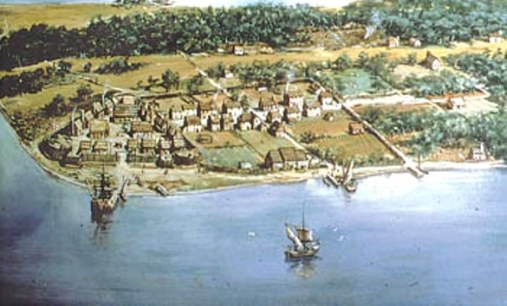 Jamestown, the first colonial capital of Virginia, in the 1600s 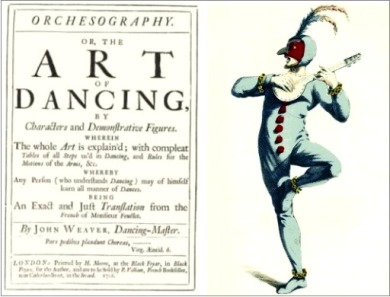 1730 – A bill declaring sodomy a sin against nature is passed in the states of Holland, carrying the death penalty

1798 – The Battle of the Pyramids: The French army under Napoleon Bonaparte scored a decisive victory against the forces of the local Mamluk rulers, wiping out almost the entire Egyptian army 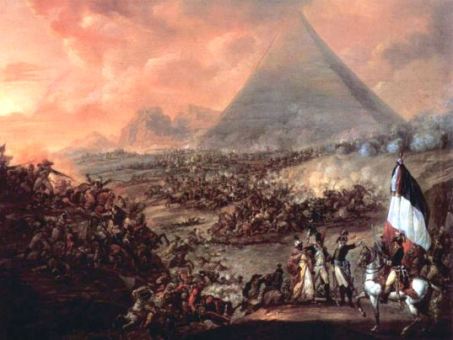 The Battle of the Pyramids by François-Louis Watteau

1804 – Victor Schoelcher born, French abolitionist and writer; head of a government commission in 1848 which issues a decree of principles in April 1848, leading to abolishing slavery in all French colonies – His birthday is celebrated as Victor Schoelcher Day * on Guadeloupe and Sint Maarten 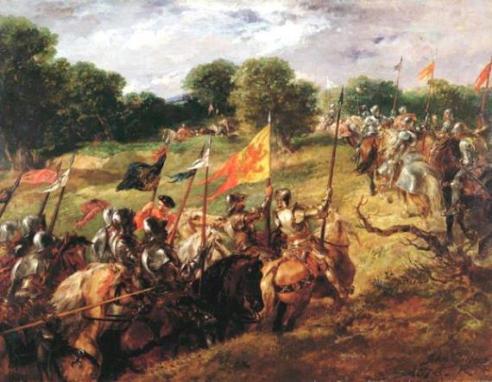 ‘With all their banners bravely spread’ by Sir John Gilbert – 1878

1858 – Maria Christina of Austria born, Queen consort of Spain until her husband’s just before the birth of their son, and she became the regent for her son Alfonso XIII, until 1902, when he was crowned. During her time as regent, the Treaty of Paris (1898), was signed, ending the Spanish-American War

1877 – The Great Railroad Strike: the strike begins July 14 when the Baltimore & Ohio Railroad cut workers wages for the third time in a year;  John Carroll, Governor of Maryland, calls out the National Guard to put down the strike in Baltimore. On July 21, as troops marched toward B & O’s Camden Yard, citizens of Baltimore attack them, and violent street battles erupt between the striking workers and the Maryland militia. The troopers fire on the crowd, killing 10 and wounding 25. The rioters injure several militiamen, damage train engine and cars, and burn part of the station before
President Rutherford B. Hayes sends federal troops to restore order

1896 – Sophie Bledsoe Aberle born, American anthropologist, author, physician and nutritionist who worked with Pueblo people in New Mexico; employed by the Bureau of India Affairs (1935-1944),then for the National Research Council (1944-1949), and for the University of New Mexico (1949-1954); she was a strong advocate for Pueblo land rights in her 1948 book, The Pueblo Indians of New Mexico, Their Land, Economy and Civil Organization, and served on many boards and committees for land allocation and healthcare; she was one of the first two women appointed to the National Science Board by President Truman (1951-1957); Chief Nutritionist at the Bernalillo County Indian Hospital (1955-1966); professor of psychiatry at the University of New Mexico (1967-1970)

1900 – Isadora Bennett born, theatrical and dance publicity agent, Martha Graham was her client from 1939 until 1970, and other clients included  José Limón, José Greco, American Ballet Theatre, Royal Danish Ballet, and the Joffrey Ballet; she is credited with bringing much attention to modern dance, helping to establish its popularity with American audiences 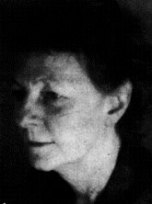 1904 – Frenchman Louis Rigolly is the first man to break the 100 mph (161 km/h) barrier on land, driving a 15 liter Gobron-Brillié automobile in Ostend, Belgium

1922 – Kay Starr born, American jazz and pop singer; biggest hit was “Wheel of Fortune”; Billie Holiday called her “the only white woman who could sing the blues” 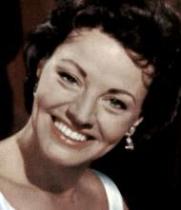 1925 – John Scopes is convicted of violating Tennessee law banning teaching Darwin’s
theory of evolution, but the judge sets his fine instead of the jury, so case is overturned 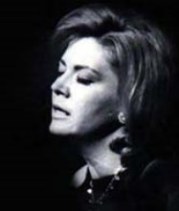 1930 – The U.S. Veteran’s Administration is established

1944 – Onyebuchi “Buchi” Emecheta born in Nigeria, British novelist and children’s author; The Bride Price, The Slave Girl, which won the 1978 New Statesman Jock Campbell Award, and The Joys of Motherhood

1949 – Christina Hart born, director, producer, playwright and actress; known for her plays Women Over the Influence and Birds of a Feather 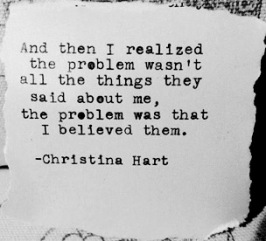 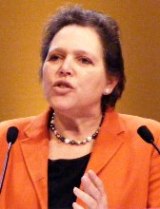 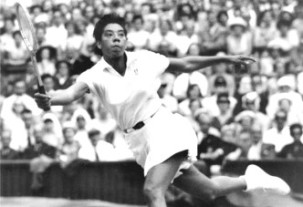 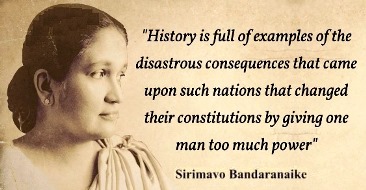 1990 – The Wall – Live in Berlin concert performance by Roger Waters and guest artists commemorates the fall of the Berlin Wall eight months earlier, on a section of the former “no man’s land” near the Brandenburg Gate

1997 – The fully restored USS Constitution (aka “Old Ironsides”) celebrates her 200th birthday, setting sail for the first time in 116 years

2010 – President Obama signs into law the most sweeping overhaul of U.S. lending and high finance rules since the 1930s

2016 – Fox News chief Roger Ailes resigned after former anchor Gretchen Carlson filed a lawsuit accusing him of sexual harassment. Ailes led the far-right conservative cable news channel for 20 years, building it from scratch into a money-making ratings juggernaut. He reportedly stands to get a $40 million exit package. Rupert Murdoch, the 85-year-old executive co-chairman of the news channel’s parent — 21st Century Fox — will take over as acting CEO until a permanent replacement is hired

Nona Blyth Cloud has lived and worked in the Los Angeles area for the past 50 years, spending much of that time commuting on the 405 Freeway. After Hollywood failed to appreciate her genius for acting and directing, she began a second career managing non-profits, from which she has retired. Nona has now resumed writing whatever comes into her head, instead of reports and pleas for funding. She lives in a small house overrun by books with her wonderful husband.
View all posts by wordcloud9 →
This entry was posted in History, Holidays, On This Day and tagged Althea Gibson, Ernest Hemingway, Hart Crane, Janet Reno, Kay Starr, Onyebuchi "Buchi" Emecheta, Robin Williams. Bookmark the permalink.
Loading Comments...
%d bloggers like this: