Save the Eagles Day

Ghana – Accra: Return to the Future

49 BC – Julius Caesar crosses the Rubicon, signaling the start of civil war; the year before the Roman Senate, led by Pompey, had ordered Caesar to disband his army and return to Rome because his term as governor of Gaul had finished, but Caesar thought he would be prosecuted if he entered Rome without the immunity enjoyed by a magistrate; Pompey then accused Caesar of insubordination and treason

9 AD – Wang Mang, a Han dynasty official, seizes the throne from the Liu family and founds the Xin dynasty. His reign (9-23) is the beginning and the end of the Xin dynasty. Emperor Wang Mang dies in battle defending the capital city, Chan’an, which is overrun and sacked. Liu Xiu reestablishes the Han dynasty, taking the throne as Emperor Guangwu

1480 – Archduchess Marguerite (Margaret) of Austria, daughter of Maximilian I, Holy Roman Emperor, and Mary, Duchess of Burgundy; Governor of the Habsberg Netherlands (1507-1515 and 1519-1530), After a broken engagement, and two short marriages, each ended by the death of her husband, she vowed at the age of 24 never to marry again. In 1506, she became the only woman to be elected by the representative assembly of the Franche-Comté (an eastern French region) as their ruler. In 1507, her father named her Governor of the Low Countries and guardian of her seven-year-old nephew, the future Holy Roman Emperor Charles V. She acted as intermediary between her father and her nephew’s subjects in the Netherlands, and negotiated the restoration of a treaty of commerce with England favorable to the Flemish cloth interests. After his majority in 1515, Charles rebelled against her influence, but he soon recognized her as one of his wisest advisers, and she became the only regent ever re-appointed indefinitely by the ruler who dismissed her. She was again governor of the Netherlands from 1519 until 1530. Her reign was a period of relative peace and prosperity for the Netherlands, but the Dutch were beginning to rebel against Roman Catholicism, and the first Protestant martyrs were burnt at the stake in 1523. In 1529, together with Louise of Savoy, she negotiated the Treaty of Cambrai, called the Ladies’ Peace. In November 1530, a maid broke a glass goblet, and a glass splinter lodged in Margaret’s foot. When the wound became gangrenous, her doctors strongly urged the amputation of her foot. She gave her consent for the operation, received the sacrament, and revised her will. Before the amputation could be performed, she died at age 50, apparently from an overdose of opium given to her in preparation for the operation, on December 1, 1530. She appointed Charles V as her universal and sole heir

1838 – Peculiar People Day * – ‘The Peculiar People’ is founded by John Banyard in Rochford Essex, a Christian movement. The name comes from Deuteronomy 14-2:
“For thou art an holy people unto the Lord thy God, and the Lord hath chosen thee to be
a peculiar people unto himself, above all the nations that are upon the earth.”

1839 – Indian tea becomes available in Britain for the first time, which is much less expensive than Chinese tea, and quickly increases tea’s popularity

1840 – The penny post, a standard rate paid for by the sender instead of the recipient, begins in Britain

1861 – Florida secedes from the union 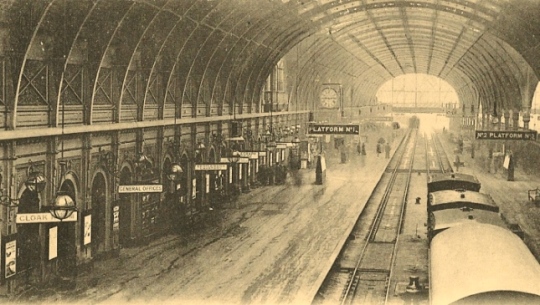 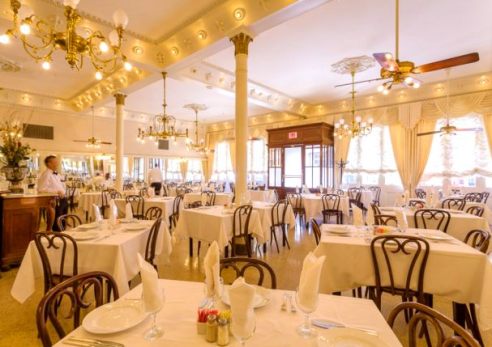 1889 –After French officer and explorer Louis-Gustave Binger traveled from the Niger River to the Gulf of Guinea, France declares the Côte d’Ivoire as a French Protectorate, and Binger is appointed as its first colonial governor

1898 – Katharine Burr Blodgett born, American physicist and engineer; first woman to earn a PhD in Physics from the University of Cambridge; inventor of low-reflectance “invisible” glass 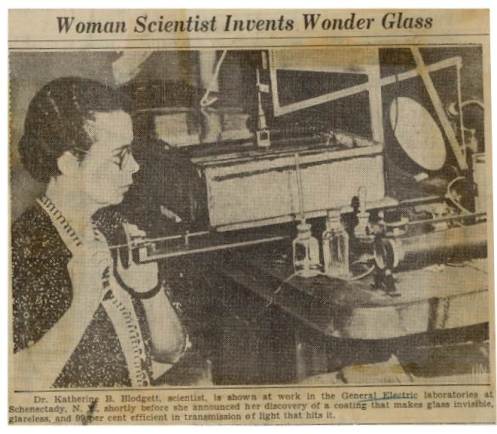 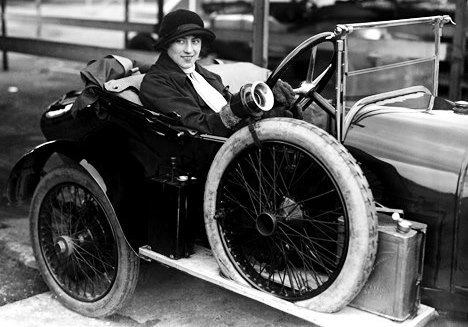 1900 – Second Anglo-Boer War: During the siege of Makeking, Barolong Chief Wessel Montshiwa advises his people not to help the British

1901 – The first great Texas oil gusher is discovered at Spindletop in Beaumont, Texas

1903 – Barbara Hepworth born, English Modernist artist and sculptor, one of the few women artists of her generation to achieve international prominence. She was a leading figure in the colony of artists at St. Ives during WWII.  Hepworth was awarded the Grand Prix at the 1959 São Paulo Art Biennial, and the Freedom of St Ives award in 1968 for her significant contributions to the town. She died at age 72 in St. Ives, in a accidental fire at her studio in 1975. There are two museums named for her:  the Barbara Hepworth Museum in St. Ives, and the Hepworth Wakefield Museum in Wakefield, the place of her birth, in West Yorkshire

1915 –  Cynthia Freeman born as Bea Feinberg, American novelist; after ill-health forced her to give up her interior design business, she turned to writing to earn her living, specializing in multi-generational stories of Jewish families, centering on women protagonists; noted for A World Full of Strangers, Come Pour the Wine, and her best-selling No Time for Tears

1917 – The Silent Sentinels, organized by Alice Paul and the National Woman’s Party, begin their six-day-a-week vigil in front of the White House, wearing purple, white and gold sashes, and holding banners addressed to Woodrow Wilson, “Mr. President – How long must women wait for liberty?” and “Mr. President – What will you do for Woman Suffrage?” The protest will continue until June 4, 1919, when the 19th Amendment to the U.S. Constitution is finally passed by both Houses and sent to the states for ratification. But before that, opponents of the suffragists will grab banners and destroy them, throw rotten fruit, and shout insults. Nearly 2,000 women participate in the protests during these 2 ½ years, and many of them will be harassed, arrested, and mistreated by local and federal authorities, including being subjected to violent forced-feedings to stop their hunger strikes in protest of their imprisonment, and even beatings and chokings. The sentences for “obstructing traffic” grow longer and longer, because the women refuse to pay bail, and insist on serving their sentences.  Eventually, newspapers across the country print accounts of how the women are being brutalized, and support for the Suffrage Movement grows. In January 1919, President Wilson announces his support of the women’s suffrage amendment 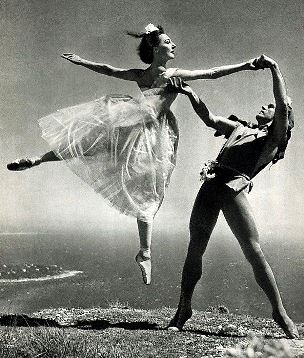 1924 – Lumilla Chiriaeff born in Latvia, Canadian ballet dancer, and choreographer of over 300 ballets for stage and television. She was the founder and Company Director of Les Ballets Chiriaeff in 1952, which became Les Grands Ballets Canadiens in 1957. In 1966, Chiriaeff established the first fully professional ballet school in the province of Québec. Her ballet, Suite Canadienne, was one of the most popular and frequently performed by Les Grands Ballets Canadiens. After training in Berlin, during WWII, she was suspected by the Reich of being Jewish, although she wasn’t, and was confined in a Nazi labor camp until she escaped during a bombing raid, and was helped by the Red Cross to get to Switzerland, where she was able to establish her career as a dancer. In 1952, she emigrated to Canada, and settled in Montréal

1928 – The Soviet Union orders the exile of Leon Trotsky

1931 – Rosalind Howells born in Grenada, Baroness Howells of St Davids; a Labour Life Peer of the House of Lords since 1999, and a race relations and social justice activist. Formerly the Director of the Greenwich Racial Equality Council (GLC), the first black woman to sit the GLC’s Training Board, and also the first woman member of the Court of Governors of the University of Greenwich. She was also the Vice Chair at the London Voluntary Services Council

1939 – Michaela Odone born, American journalist; co-developer of Lorenzo’s Oil for their son Lorenzo, who was diagnosed with adrenoleukodystrophy (ALD) at age five, which some studies have shown may slightly delay development of symptoms of the disease in asymptomatic patients

1944 – Jeffrey Catherine Jones born as Jeffrey Durwood Jones, transgender American fantasy artist, with more than 150 covers for many different types of books to her credit, and full-page comics for National Lampoon, as well as venturing into fine art. Jones won the Hugo for Best Professional Artist in 1970, 1971, and 1972. In 1976, Jones was one of the founding artists of The Studio. In 1986, she was honored with the World Fantasy Award for Best Artist. In the 1990s, she moved away from commercial art, and concentrated on painting. She died at age 67, after suffering from severe emphysema, in 2011 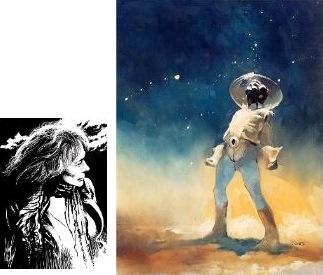 1946 – The first General Assembly of the United Nations opens in London, attended by representatives from fifty-one nations, and the League of Nations is dissolved

1960 – Gurinder Chadha born in Kenya of Sikh Indian parents, Kenyan-English film director and screenwriter; she began her career at the BBC, first in radio, then moving to television news, and segued into making documentaries for the BBC, the British Film Institute, and Channel Four. By 1990, Chadha had founded her production company, Umbi Films. Her first independent film was a short subject, Nice Arrangement, about a British Asian wedding, which selected for the Cannes Film Festival Critic’s section in 1991.  Her first feature film, Bhaji on the Beach, won numerous international awards including a BAFTA  Nomination for Best British Film of 1994. It was the first feature film directed by a British Asian woman. In 2002, her best-known film, Bend It Like Beckham, became the highest grossing British-financed, British-distributed film, ever in the UK box-office, until it was surpassed by Slumdog Millionaire in 2008

1966 – Tashkent Declaration, a peace agreement signed between India and Pakistan that resolved the Indo-Pakistani War of 1965

1971 – Masterpiece Theatre premieres on PBS with host Alistair Cooke; its debut drama series is The First Churchills  (it was first seen in the UK in 1969)

1985 – Sandinista Daniel Ortega becomes president of Nicaragua and vows to continue the transition to socialism and alliance with the Soviet Union and Cuba; American policy continues to support the Contras in their revolt against the Nicaraguan government

1990 – Time-Warner is formed by the merger of Time Inc. and Warner Communications

2011 – A judge orders former U.S. House Majority Leader Tom DeLay to serve three years in prison for his role in a scheme to illegally funnel corporate money to Texas candidates in 2002; in 2013, a Court of Appeals ruling by two Republican justices, with a dissent by the Democratic Chief Justice, overturned his convictions and entered an acquittal, which became final in 2014

2018 – Governors and other leaders in California, Oregon, South Carolina, New York, and other coastal states protested the Trump administration’s announcement of a major expansion of offshore drilling, especially after it was reported that Interior Secretary Ryan Zinke had assured Rick Scott, Florida’s Republican governor, that his state would be excluded. The other coastal governors said they also have attractive coastlines, tourist economies, and local opposition to drilling. “New York doesn’t want drilling off our coast either,” tweeted New York Governor Andrew Cuomo, a Democrat. “Where do we sign up for a waiver?”

Nona Blyth Cloud has lived and worked in the Los Angeles area for over 50 years, spending much of that time commuting on the 405 Freeway. After Hollywood failed to appreciate her genius for acting and directing, she began a second career managing non-profits, from which she has retired. Nona has now resumed writing whatever comes into her head, instead of reports and pleas for funding. She lives in a small house overrun by books with her wonderful husband.
View all posts by wordcloud9 →
This entry was posted in History, Holidays, On This Day and tagged Alice Paul, Bernadette Olowo, Fritz Lang, Gurinder Chadha, Robinson Jeffers, Rosalind Howells, Thomas Paine. Bookmark the permalink.
Loading Comments...
%d bloggers like this: