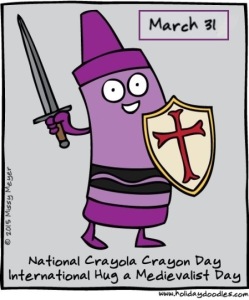 1425 – Bianca Maria Visconti born, Duchess of Milan, active in the administration of the Duchy, known as a “warrior woman” for her defense of Cremona against the Venetians

1776 – Abigail Adams writes to her husband John who is helping to frame the Declaration of Independence and cautions: “…remember the ladies, and be more generous and favorable to them than your ancestors. Do not put such unlimited power into the hands of the Husbands. Remember all Men would be tyrants if they could. If particular care and attention is not paid to the Ladies we are determined to foment a Rebellion, and will not hold ourselves bound by any Laws in which we have no voice, or Representation.”

1809 – Edward Fitzgerald born, English writer-translator; known for his translation of The Rubaiyat of Omar Khayyam

1822 – The massacre of the people of the Greek island Chios by soldiers of the Ottoman Empire following a rebellion attempt, is depicted by the French artist Eugène Delacroix

1823 – Mary Chesnut born, South Carolina American Civil War diarist; notable for her attention to detail, and portrait of South culture, including white planters’ fathering mixed-race children with slave women; daughter of a plantation family, she married James Chesnut, a politician who became an aide to Jefferson Davis during the war, enabling her to be an eyewitness to a number of important wartime events

1854 – Treaty of Kanagawa: Commodore Perry forces Japan to opens ports to US

1861 – The Confederacy takes over the U.S. mint at New Orleans

1865 – Anandibai ‘Anandi’ Gopal Joshi born, the first Indian woman to become a physician. Though she was married at age nine to Gopalrao Joshi, a postal clerk who was twenty years older, she was fortunate that her husband was a believer in education for women, and encouraged her in her studies. She was only fourteen when her first child was born, but he only lived ten days because of the lack of medical care, which inspired her to become a physician. In 1880, Gopalrao wrote a letter to Royal Wilder, an American missionary, about his wife’s interest in studying medicine in the U.S. and inquiring about a suitable post for himself there. Wilder published the letter in his Princeton’s Missionary Review, where it was read by Theodicia Carpenter, who wrote to Anandi, the beginning of what became a close friendship. Anandi began to have health problems, and Gopalrao decided to send her to America on her own as soon as possible. The Thrinborns, an American couple who were doctors, suggested she apply to the Woman’s Medical College of Pennsylvania. The orthodox Indian community censured her for wanting to go to college in the West, but she addressed them in a meeting in the hall at Serampore College, stressing the need for women doctors in India, saying that a Hindu woman doctor could better serve the needs of Hindu women. When her speech was publicized, contributions came in from all over India. In 1883, she travelled to New York by ship, chaperoned by 2 Englishwomen missionaries known by the Thornborns. Theodicia Carpenter welcomed her, and she stayed in Carpenter’s home while she was at the Woman’s Medical College of Pennsylvania, beginning her training at age 19. The climate did was too cold, and the food was unfamiliar. She developed tuberculosis, but still graduated with an M.D. in 1886. Returning to India, the princely state of Kolapur appointed her as physician-in-charge of the female ward of the local Albert Edward Hospital. But in 1887, only a few months after her return, she died of tuberculosis at age 21. Her death was mourned throughout India 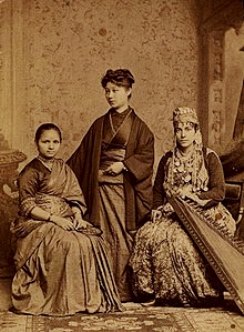 Anandibai Joshee, with Kei Okami from Japan (center) and Sabat Islambouli from Syria (right). All three completed their medical studies at the Woman’s Medical College of Pennsylvania and each of them was the first woman from their respective countries to obtain a degree in Western medicine

1888 – National Council of Women of the U.S. is organized by Susan B. Anthony, Clara Barton, Julia Ward Howe, and Sojourner Truth, among others, the oldest non-sectarian women’s organization in the U.S.

1889 – Eiffel Tower Day * – French engineer Alexandre Eiffel unfurls the French flag atop the completed Eiffel Tower as it is opened to the world; at 300 meters high (just over 984 feet), it will be the tallest man-made structure in the world for four decades

1889 – Muriel Hazel Wright born, Choctaw Indian, teacher, historian, author, editor of The Chronicles of Oklahoma, quarterly journal of the Oklahoma Historical Society (1955-1973), co-authored 4-volume history of Oklahoma, textbooks of Oklahoma history, and A Guide to the Indian Tribes of Oklahoma(1951)

1913 – Etta Baker born, American singer and Piedmont blues guitarist.
She began playing when she was three years old, taught by her father. Her family heritage was a mix of African-American, Native American and mixed European. There were eight children, and the family was poor. She dropped out of school after the 10th grade. She married Lee Baker, a piano player, in 1936, and they had nine children. She with first recorded in 1956, when she and her father met folksinger Paul Clayton, who was impressed by her playing, and used a tape recorder to record her playing several songs. Five of her solos were used on an album called Instrumental Music of the Southern Appalachians, which was one of the first commercially released recordings of African American banjo music.  She shared her knowledge with famous musicians like Bob Dylan, Taj Mahal and Kenny Wayne Shepherd. She died of a stroke at age 93.

1914 – Octavio Paz born, Mexican poet, author and diplomat; 1990 Nobel Prize for Literature; entered the Mexican diplomatic service in 1945, assigned to New York City, Paris, Tokyo, and Switzerland, before returning to Mexico City in 1954, and then sent again to Paris in 1959. In 1962, he became Mexico’s ambassador to India. In 1968, he resigned from the diplomatic service in protest over the massacre by government troops of student demonstrators in the Plaza de las Tres Culturas in Tlatelolco. He was Simón Bolivar Professor at Cambridge University (1969-1970), then founded the literary magazine Plural (1970-1976) in Mexico. Among many other works, he is noted for  El Laberinto de la Soledad (The Labyrinth of Solitude), and his poetry collection Piedra de Sol (Sunstone)

1914 – Maria Lange born as Dagmar Lange, Swedish crime fiction author, one of the first mystery writers in the Swedish language, whose 40 detective novels helped make the genre popular in Sweden

1917 – Transfer Day * – the Danish West Indies are transferred from Denmark to the U.S. for $25 million, and renamed the Virgin Islands

1918 – First Daylight Savings time goes into effect in the U.S.

1920 – Deborah Cavendish born, Duchess of Devonshire, sister of Nancy and Jessica Mitford; author primarily of non-fiction books, many of them about seat of the Duje of Devonshire, Chatsworth House, and its history

1929 – Liz Claiborne born in Belgium, American fashion designer, first woman to be to found and serve as CEO of a Fortune 500 company

1930 – The Motion Pictures Production Code is instituted, imposing strict guidelines on the treatment of sex, crime, religion and violence in film for the next 38 years

1934 – Kamala Suraiyya born, Indian author in Malayalam of short stories and her autobiography, while publishing poetry in English, often under the pen names; syndicated columnist who often wrote on women’s issues and politics 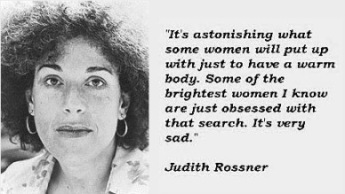 1939 – The Hound of Baskervilles is released, the first Holmes film starring Basil Rathbone as Sherlock Holmes and Nigel Bruce as Dr. Watson

1942 – Ulla Hoffmann born, Swedish Vänsterpartiet (Left Party) politician; member of the Riksdag (1994-2006); she briefly served as interim leader of her party in 2003 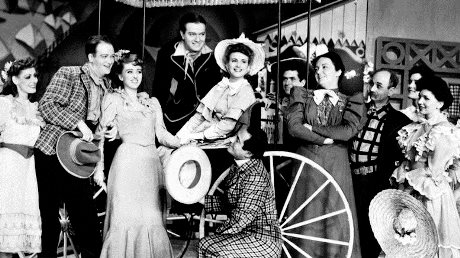 1943 – Deirdre Clancy born, British costume designer for theatre, ballet, opera and film. Winner of two Olivier Awards for Best Costume Design in 1995 and 2005, and a BAFTA Award for her costumes for the 1997 movie Mrs. Brown. She is the author of Costume since 1945: Couture, street style and anti-fashion, and co-author of Colonial America

1945 – Premiers of Tennessee Williams’ play The Glass Menagerie on Broadway

1950 – Sandra Morgen born, American feminist anthropologist; director of the University of Oregon Center for the Study of Women in Society

1967 – In London, Jimi Hendrix burns his guitar for the first time 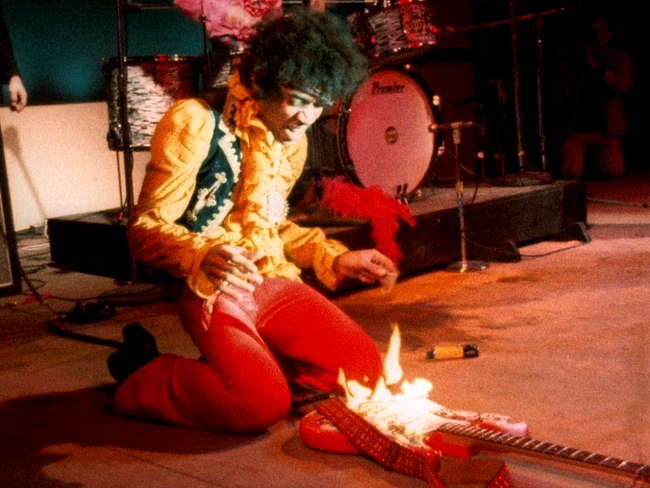 1968 – President Lyndon Johnson announces he will not seek re-election

1969 – Nyamko Sabuni born in Burundi, Swedish politician, member of the Liberal People’s Party; Minister for Gender Equality (2006-2013), the first person of African descent to be appointed as a Minister ; her outspoken opinions on genital mutilation, honor killings, against wearing of the hijab by girls under 15 and statement that praying five times a day “limited opportunities” for Muslims brought accusations of Islamophobia 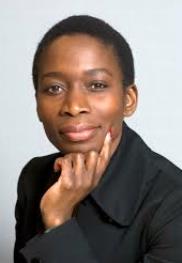 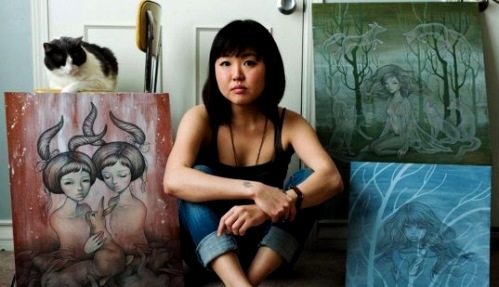 1983 – Marsha Norman’s ‘night, Mother premieres in NYC; winner of the 1983 Pulitzer Prize for Drama; the original production ran for 380 performances on Broadway

1991 – The musical Will Rogers Follies premieres on Broadway

1992 – The U.N. Security Council votes to ban flights and arms sales to Libya, branding it a terrorist state for shielding the six men suspected of blowing up Pan Am Flight 103 and a French airliner

1996 – The National Committee on Pay Equity launches National Equal Pay Day * which is set on the day in the year when a woman’s pay would finally catch up with a man’s wages from the previous year – in other words, she has to work 15 months to earn what he does in 12 months. For a woman of color, the gap is even wider; it will take her until August to earn what a man does – date changes each year

1997 – Zairian rebels, in what is now the Democratic Republic of the Congo, order 20,000 Rwandan refugees camped on the outskirts of Kisangani to move south, and relief workers begin the arduous transfer

2011 – International Hug A Medievalist Day * is started by Sarah Laseke, who was studying Medieval Literature at Oxford

2014 – A 6,200-page report by the Senate Intelligence Committee finds that so-called “enhanced interrogation techniques” do not provide information which led to the death of Osama Bin Laden. Most of the useful information about bin Laden’s whereabouts was collected using standard intelligence gathering methods

2014 – Federal Judge David C. Bury declined to halt new rules approved by Arizona’s legislature that would restrict medication-induced abortions in the first seven weeks of pregnancy. Judge Bury said that the new regulations would not put an undue burden on women seeking abortions because they still have a surgical option available to them. Planned Parenthood, one of the plaintiff’s in the case, appealed the ruling, and a three-judge panel of the 9th Circuit Court issued an injunction to block the new rules while the lawsuit continues in the federal courts

2018 – The Armenian Revolution of 2018 begins, a series of anti-government protests, continuing through April into May, supported by several political and civil groups led by Nikol Pashinyan, head of the centrist Civil Contract Party. Opposition began to build after Prime Minister Serzh Sargsyan amended the constitution in 2015 to remove term limits. The protests culminated in Pashinyan being elected as Prime Minister by the National Assembly in May, 2018

Nona Blyth Cloud has lived and worked in the Los Angeles area for the past 50 years, spending much of that time commuting on the 405 Freeway. After Hollywood failed to appreciate her genius for acting and directing, she began a second career managing non-profits, from which she has retired. Nona has now resumed writing whatever comes into her head, instead of reports and pleas for funding. She lives in a small house overrun by books with her wonderful husband.
View all posts by wordcloud9 →
This entry was posted in History, Holidays, On This Day and tagged Abigail Adams, Anandibai Gopal Joshi, Cesar Chavez, Edward Fitzgerald, Johann Sebastian Bach, Kamala Suraiyya, Nyamko Sabuni. Bookmark the permalink.
Loading Comments...
%d bloggers like this: