TCS: Making the Days Different in a Plague Year 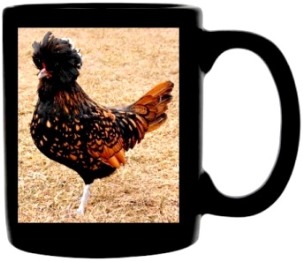 I don’t know which is more discouraging,
literature or chickens.

Like everybody else during this pandemic, I struggle to keep the days from all blurring together, trying to keep boredom and anxiety at bay.

I am a projects and lists person – always more than one project going, and endless lists.

The difficulty of keeping track of what day it is today is a widespread problem. Since I have two ongoing day-by-day history projects, I have to keep backtracking, refocusing on what I put together for today that I actually set up last week. Probably the closest thing to time travel I’ll ever experience.

Humans are big on starting “Days” – national days, holidays, memorial days, days for raising awareness of diseases, for causes, and a host of things that matter to us – there are long lists of them.

For example, TODAY is:

So if I put ‘Bird Day’ together with ‘Respect for Chickens Day’ then the poetry for this weekly Monday post becomes pretty easy to find.

I know why the caged bird beats its wing
Till its blood is red on the cruel bars;
For he must fly back to his perch and cling
When he fain would be on the bough a-swing;
And a pain still throbs in the old, old scars
And they pulse again with a keener sting—
I know why he beats his wing!

“Sympathy” from The Complete Poems of Paul Laurence Dunbar (1913)

Paul Lawrence Dunbar (1872-1906) born in Dayton Ohio, the son of freed slaves,  was one of the first African American poets to gain national recognition. When he moved to Chicago in 1893, he became friends with Frederick Douglass, who helped him find a job as a clerk, and arranged a public reading for Dunbar to present his poems. Within two years, his poems were appearing in national magazines and newspapers, including the New York Times. After a reading tour of England in 1897, he received a clerkship at the Library of Congress, but by 1898, he was suffering from tuberculosis, and resigned his position to concentrate on writing and giving readings. He died at age 33.

Last Night I Dreamed of Chickens

Last night I dreamed of chickens,
there were chickens everywhere,
they were standing on my stomach,
they were nesting in my hair,
they were pecking at my pillow,
they were hopping on my head,
they were ruffling up their feathers
as they raced about my bed.

“Last Night I Dreamed of Chickens” from Something BIG Has Been Here, © 1990 by Jack Prelutsky – Greenwillow Books

Jack Prelutsky (1940 – ), American poet and children’s author; he has published over 50 poetry collections, mostly for children, and was named as the very first ‘Children’s Poet Laureate’ by the Poetry Foundation (2006-2008). He lives in the Seattle, Washington area, and spends much of his time reading his poems aloud to children in schools and libraries all around the United States.

Tuwee, calls a bird near the house,
Tuwee, cries another, downhill in the woods.
No wind, early September, beeches and pines,

Where is?—I’m here?—an upward inflection in
Query and in response, a genetic libretto rehearsed
Tens of thousands of years beginning to leave its indelible trace,

Clawprint of language, ritual, dense winged seed,
Or as someone were slowly buttoning a shirt.
I am happy to lie in the grass and listen, as if at the dawn of reason,

To the clear communal command
That is flinging creaturely will into existence,
Designing itself to desire survival,

Liberty, companionship,
Then the bird near me, my bird, stops inquiring, while the other
Off in the woods continues calling faintly, but with that upward

Inflection, I’m here, I’m here,
I’m here, here, the call opens a path through boughs still clothed
By foliage, until it sounds like entreaty, like anxiety, like life

Imitating the pivotal move of Whitman’s “Out of the Cradle,”
Where the lovebird’s futile song to its absent mate teaches the child
Death—which the ocean also whispers—

Death, death, death it softly whispers,
Like an old crone bending aside over a cradle, Whitman says,
Or the like the teapot in Elizabeth Bishop’s grandmother’s kitchen,

Here at one end of the chain of being,
That whistles a song of presence and departure,
Creating comfort but also calling for tears.

“Birdcall” from No Heaven, © 2005 by Alicia Ostriker – University of Pittsburgh Press

Alicia Ostriker  (1937 – ) born in Brooklyn, New York; American poet, scholar and Jewish feminist. She was a finalist for the National Book Award twice, and did receive the Jewish National Book Award for The Book of Seventy (2009). The Imaginary Lover (1986) won the William Carlos Williams Award.

Maisie has returned from the wilderness
of broodiness
abandoned her virtual nest, her eyes
no longer wild,
her chest no more on fire.

She shakes her gawky frame,
preens her messy feathers, looks
around in shocked surprise

as when a passion – soul-consuming,
mind-regressing, heart-obsessing –
lifts
and drifts away, leaving
feet and flesh earthbound in the everyday.

Diana Gittins (1946 – ) American writer, who has been a research fellow at the University of Essex; a lecturer at Plymouth University, and a part-time associate lecturer of creative writing for the Open University. She won the Guernsey International Poetry on the Buses competition in 2011, and took second place in the Flamingo Feather Poetry Competition. She lives in Exeter, Devon, England.

So today is Monday, May 4, 2020, and now it’s covered in feathers. However, Tuesday will Cinco de Mayo, Cartoonists’ Day, and Enchilada Day: 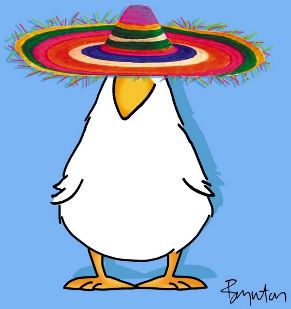 Nona Blyth Cloud has lived and worked in the Los Angeles area for the past 50 years, spending much of that time commuting on the 405 Freeway. After Hollywood failed to appreciate her genius for acting and directing, she began a second career managing non-profits, from which she has retired. Nona has now resumed writing whatever comes into her head, instead of reports and pleas for funding. She lives in a small house overrun by books with her wonderful husband.
View all posts by wordcloud9 →
This entry was posted in Poetry, The Coffee Shop and tagged Alicia Ostriker, Diana Gittins, E.B. White, Jack Prelutsky, Making the Days Different in a Plague Year, Paul Laurence Dunbar, TCS. Bookmark the permalink.

4 Responses to TCS: Making the Days Different in a Plague Year