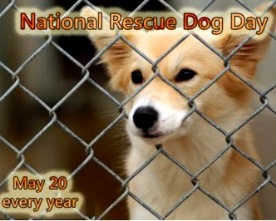 325 – The First Council of Nicaea is formally opened, ecumenical council of Christian bishops convened by Roman Emperor Constantine I, an effort to gain consensus among Christians; origin of the Nicene Creed

1293 – King Sancho IV of Castile founds the Estudio de Escuelas de Generales in Alcalá de Henares, now called Complutense University of Madrid, one of the oldest universities in the world

1520 – The massacre at the festival of Tóxcatl takes place during the Fall of Tenochtitlan, turning the Aztecs against the Spanish 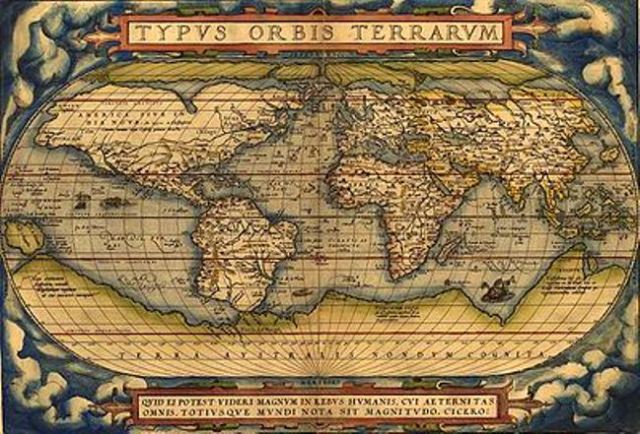 1609 – Shakespeare’s sonnets are first published in London, by the publisher Thomas Thorpe, who was probably responsible for the arrangement of the sonnets into categories; he probably didn’t have Shakespeare’s permission 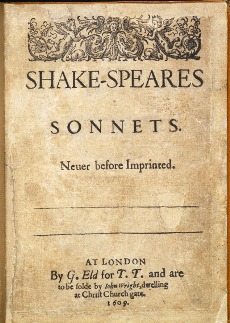 1734 – World Bee Day * – Anton Janša born in Carniola (now part of Slovenia), apiarist, painter and author; pioneer and expert in beekeeping; he wrote A Full guide to Beekeeping and Discussion on Beekeeping

1759 – William Thornton born in the British Virgin Islands, American inventor, amateur architect and painter; his design for the U.S. Capitol building was approved by President Washington in 1793; he was appointed by President Thomas Jefferson as the first Superintendent of the U.S. Patent Office – Thornton convinced the British not to burn the Patent Office in 1814 because of its importance to mankind

1768 – Dolley Payne Madison born, American First Lady whose efforts saved the portrait of George Washington and other national treasures in 1814 when the British set fire to Washington DC, including the Executive Mansion, during the War of 1812 – only a sudden heavy storm saved the city from total destruction 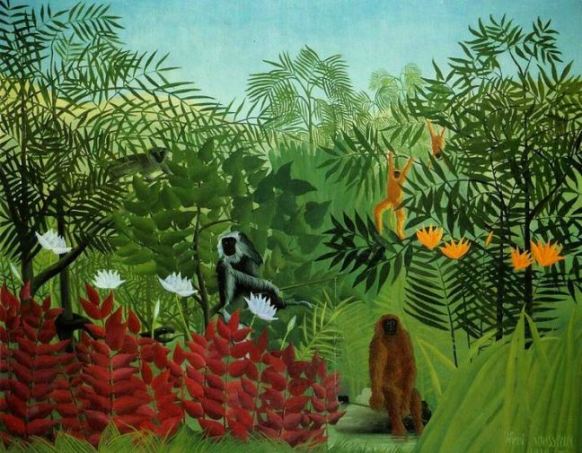 1862 – U.S. President Abraham Lincoln signs the Homestead Act of 1862 into law, opening millions of acres of public land in the West as individual grants, usually 160 acres or 0.65 km2, to any US citizen willing to settle on and farm the land minimum period. The law requires a three-step procedure: file an application, improve the land, and file for deed of title. Any citizen who had never taken up arms against the U.S. government (including freed slaves after the fourteenth amendment) and was at least 21 years old or the head of a household, could file an application to claim a federal land grant. The occupant(s) had to reside on the land for five years, and show evidence of having made improvements.  The down side of the act was that many of the sections of land the U.S. government “opened” were not uninhabited, but were traditional tribal lands of American Indians

1872 – Madeline McDowell Breckinridge born, American social reformer; advocate for child welfare, women’s rights and tuberculosis treatment; co-founder of the Women’s Emergency Committee in Kentucky, which successfully campaigned for playgrounds and kindergartens in poorer districts and legislation setting up a juvenile court system, regulations for child labour, and compelling school attendance. Helped establish and served on the Kentucky Tuberculosis Commission, co-chair of fundraising for the Blue Grass Sanitorium; advocate for woman suffrage, helped win Kentucky women the right to vote in school elections; vice president of National American Woman Suffrage Association (1913-1915), and largely credited with ratification of the 19th Amendment by the Kentucky legislature in 1920

1872 – Wivi Lönn born as Olivia Lönn, Finland’s first woman architect, who founded her own office; studied architecture at Polytechnic College, and graduated in 1896. She established her repution ear;y by winning first prize in several architectural competions. Lönn was one of the architects who worked on the design of Finland’s National Theatre, built in 1902. She also created designs for over 30 schools, although some were not built, and several industrial buildings. Noted for her skillful and economic use of space 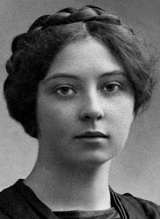 1894 – Adela Rogers St. Johns born, American author, journalist and screenwriter. Dubbed the “World’s Greatest Girl Reporter,” she covered everything from the Lindbergh kidnapping trial to the Dempsey-Tunney boxing match. She wrote ‘sob sister’ celebrity interviews, and short stories for Cosmopolitan and The Saturday Evening Post.  In 1915, she was commissioned by James R. Quirk, editor at Photoplay magazine, to do interviews with Hollywood celebrities. From the early days of silent films through the 1940s, she wrote a number of screenplays, including What Price Hollywood?  In the mid-1930s, she moved to Washington, D.C., to report on national politics for the Washington Herald. Her coverage of the assassination of Senator Huey Long in 1935, the abdication of King Edward VIII in 1936, the Democratic National Convention of 1940, and other major stories made her one of the best-known reporters of the day. St. Johns left newspaper work in 1948 to concentrate on writing books, including Final Verdict, a biography of her father, notable trial lawyer Earl Rogers. In 1970, she was awarded the Presidential Medal of Freedom. She died in 1988 at the age of 94. 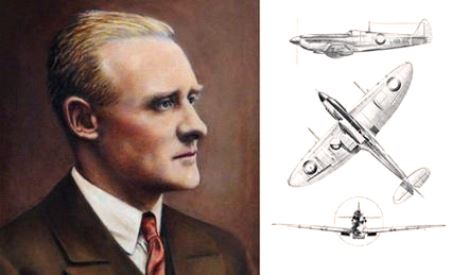 1900 – Lydia Cabrera born, Cuban ethnologist and short-story author, noted for collecting Afro-Cuban folklore. She did extensive work in Matanzas, and also the small towns south of the city of Matanzas itself, places such as Perico and Union de Reyes

1901 – Doris Fleeson born, American journalist and columnist; co-author with her then-husband of “Capital Stuff” for the New York Daily News (1933-1942); she was a WWII war correspondent in France and Italy (1943-1945); after the war, wrote a political column for The Boston Globe and Washington Evening Star, becoming the first U.S. woman to have a nationally syndicated column when the Bell syndicate picked it up, and it ran in 100 newspapers by 1960; Member of the Women’s National Press Club

1918 – Aleksandra Boiko born, Russian WWII tank commander; she was a chemist before the war; she and her husband raised 50,000 Soviet rubles to pay for the construction of a tank for the Soviet Army, appealing to be sent to the Eastern Front. After they both graduated from the accelerated programme at the Chelyabinsk Tank School, she was appointed as a tank commander, and her husband was her engineer. Their first battle was the Riga Offensive in 1944; they were credited with destroying five enemy tanks and two guns. She was awarded the Order of the Patriotic War first class. Later, they were both injured fighting in the Baltics, but released from hospital in time to celebrate Victory Day in Czechslovakia. After the war, she ran a bakery in Magadan on the Sea of Okhotsk, where she was elected to the city council twice, in 1947 and 1953

1927 – At 07:52 Charles Lindbergh takes off from Roosevelt Field in Long Island NY, on the world’s first solo non-stop flight across the Atlantic Ocean; he touches down at Le Bourget Field in Paris at 22:22 the following day

Just before takeoff from Roosevelt Field

1932 – Amelia Earhart takes off from Newfoundland to begin the first solo nonstop flight across the Atlantic Ocean by a woman pilot, landing in Ireland the next day

1946 – Cher born as Cherilyn Sarkisian, American singer-songwriter, actress and producer; one of the best-selling music artists in history, she is also the winner of a Grammy, an Emmy, three Golden Globes, and an Oscar for Best Actress in Moonstruck; her charitable foundation supports health research, anti-poverty initiatives, veterans rights, protection of vulnerable children, humanitarian efforts in Armenia, and Habitat for Humanity – Cher has been an honorary chair of Habitat’s “Raise the Roof” campaign

1949 – Michèle Roberts born, British-French essayist, novelist and poet; a socialist and feminist, she was the poetry editor (1975-1977) at the feminist magazine, Spare Rib; her novel Daughters of the House was shortlisted for the Booker Prize

1954 – Bill Haley and his Comets release “Rock Around the Clock”

1961 – A white mob attacks a busload of “Freedom Riders” in Montgomery Alabama; the federal government sends in U.S. marshals to restore order

1961 – Algerian War for Independence: a 30-day cease-fire is declared as talks begin between Algerian Muslim leaders led by Krim Belkacem, and the French representatives headed by Louis Joxe, French Secretary of State for Algerian Affairs, in Evian-les-Bains, France. The talks will fall apart in June, over failure to come to any agreement on the future of French settlers and sovereignty over the Algerian Sahara (where petroleum deposits had been discovered in 1956) 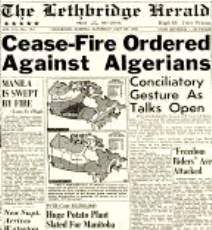 1980 – Voters in Quebec reject, by a 60% margin, a referendum on moving toward independence from Canada

1995 – U.S. President Clinton announces the two-blocks of Pennsylvania Avenue in front of the White House will be permanently closed to traffic as a security measure

1996 – The U.S Supreme Court rules in Romer v. Evans against a law that would have prevented any city, town or county in the state of Colorado from taking any legislative, executive, or judicial action to protect the rights of gays and lesbians

2014 – Hominin fossils of very early human ancestors have been found in the Turkana Basin in Northern Kenya; on this day, Sonia Harmand and Jason Lewis of Stony Brook University announce discovery of tools found near Lake Turkana dated to 3.3 million years ago, making them the oldest tools yet discovered 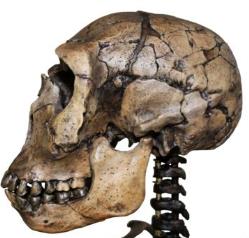 2016 – Oklahoma Governor Mary Fallin, a Republican, vetoes a bill that would have effectively banned abortions in the state by making it a felony for doctors to perform abortions, except on women whose lives are at risk. Governor Fallin said, “The bill is so ambiguous and so vague that doctors cannot be certain what medical circumstances would be considered ‘necessary to preserve the life of the mother’”

2018 – A report from the Center for American Progress shows that U.S. women made steadier and larger gains toward equality and leadership between 1980 and the early 2000s, but progress has been uneven, and there are far greater barriers faced by woman of color and women from ethnic minorities. While women have outnumbered men as college graduates since the 1990s, they are still underrepresented at the top levels in business, science, medicine, and the law. In the 1990s and 2000s, the narrowing of the wage gap began to grind to a halt, and the percentage of women in management positions, especially in top management, stagnated. The most hopeful news in the 21st century has been the huge wave of women running for office in 2018, and the dramatic successes of many of them across the political field, from local and statewide offices through historic wins in the U.S. Congress. The number of women serving in state legislatures passed 2,000 for the first time; the number of women governors increased from six to nine, and there are now a total of 127 women serving in both houses of the U.S. Congress, holding 23.7% of the total. Most of the gains have been in the House of Representatives, and almost all the women are Democrats, which pundits credit to the Democratic Congressional Campaign Committee’s participation in the primaries, which its republican counterpart does not, and the very effective spending for Democratic, pro-choice woman candidates by Emily’s List, the largest resource for U.S. women running for office at all levels of government

Some of the “Class of 2018” Congressional women:

Nona Blyth Cloud has lived and worked in the Los Angeles area for the past 50 years, spending much of that time commuting on the 405 Freeway. After Hollywood failed to appreciate her genius for acting and directing, she began a second career managing non-profits, from which she has retired. Nona has now resumed writing whatever comes into her head, instead of reports and pleas for funding. She lives in a small house overrun by books with her wonderful husband.
View all posts by wordcloud9 →
This entry was posted in History, Holidays, On This Day and tagged Anton Janša, Cher, John Stuart Mill, Lydia Cabrera, Maria Liberia Peters, R. J. Mitchell, Wivi Lönn. Bookmark the permalink.
Loading Comments...
%d bloggers like this: