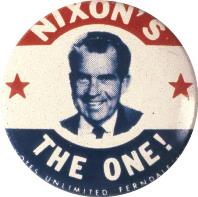 Harding’s presidency was overshadowed by bribery and corruption scandals, although he was not personally implicated.

A successful newspaper publisher who had served in the Ohio legislature and the U.S. Senate, Harding won the general election in 1920 by a landslide, promising a “return to normalcy” after the hardships of World War I (1914-1918). He favored pro-business policies and limited immigration.

After Harding died suddenly in San Francisco in 1923, the Teapot Dome Scandal broke. Harding had transferred supervision of naval oil-reserve lands from the Navy to the Department of the Interior in 1921. Secretary of the Interior Albert B. Fall accepted large bribes to secretly lease federal oil reserve land to private interests without competitive bidding.

In his personal life, prior to becoming president, Harding had been involved with an 18 year-old girl who bore his illegitimate child, and with a married woman who, with her husband, blackmailed him.

1928 – Herbert Hoover:
A chicken in every pot and a car in every garage

Less than eight months after Hoover took office, the Stock Market Crash in October, 1929, precipitated the Great Depression. Hoover assumed it would be an intense but short period of hardship, but even when it became apparent that it was going to be a much longer-term problem, he refused to involve the federal government in forcing fixed prices, controlling businesses, or manipulating the value of the currency, all of which he felt were steps towards socialism.

He was inclined to give indirect aid to banks or local public works projects, but he refused to use federal money for direct aid to citizens, believing the dole would weaken public morale. Instead, he called for  volunteerism to raise money for private charitable aid.

Richard Nixon said in his second Inaugural Address, on January 20, 1973:

Let us build a structure of peace in the world in which the weak are as safe as the strong, in which each respects the right of the other to live by a different system, in which those who would influence others will do so by the strength of their ideas and not by the force of their arms.

But the seeds that would destroy Nixon’s second term in office had already been sown. Within a few months, his administration was embattled over the “Watergate” scandal.

This break-in by Republicans at the offices of the Democratic National Committee during the 1972 campaign was traced to officials of the Committee to Re-elect the President. A number of administration officials resigned; 40 government officials were indicted, and several were convicted of offenses connected with covering up the break-in. Attorney-General John Mitchell, White House Staffers Howard Hunt and G. Gordon Liddy (who both planned the Watergate break-in), and Charles Colson, special counsel to the President, all went to prison.

Nixon denied any personal involvement (“I am not a crook”), but the courts forced him to yield tape recordings which indicated that he had, in fact, tried to divert the investigation.

Faced with almost certain impeachment, Nixon announced on August 8, 1974, that he would resign the next day, becoming the only U.S. President to resign from office:

…From the discussions I have had with Congressional and other leaders, I have concluded that because of the Watergate matter I might not have the support of the Congress that I would consider necessary to back the very difficult decisions and carry out the duties of this office in the way the interests of the Nation would require…

By taking this action, I hope that I will have hastened the start of that process of healing which is so desperately needed in America…

I regret deeply any injuries that may have been done in the course of the events that led to this decision. I would say only that if some of my Judgments were wrong, and some were wrong, they were made in what I believed at the time to be the best interest of the Nation…

“I know that men are won over less by the written than by the spoken word, that every great movement on this earth owes its growth to great orators and not to great writers.” —Adolf Hitler, “Mein Kampf,” 1925

Ronald Reagan was nicknamed “The Great Communicator.” In an era when most politicians were poor public speakers, even a second-rate actor’s oratory was electrifying.  But the legend of his presidency is at odds with the facts:

He was not an especially popular president while he was in office – his average approval rating hovered around 52% and dipped much lower when unemployment hit 10% and during the Iran-Contra scandal.

His 1981 tax-cuts benefited the wealthy, slashing the highest rate from 70% to 50%, and  giving big breaks to corporations and the oil industry; but in 1982, The Tax Equity and Fiscal Responsibility Act was the largest peacetime tax increase in U.S. history up to that point, and it mostly hurt the Middle Class. His administration also increased taxes on gasoline, and payroll taxes for Social Security.

In his 1981 Inauguration speech, Reagan declared: “in the present crisis, government is not the solution to our problem; government is the problem.”

But while legend credits him with shrinking the federal government, the facts contradict his image: Federal spending grew by an average of 2.5 percent a year, adjusted for inflation, and the national debt exploded, increasing from about $700 billion to nearly $3 trillion; the number of Federal employees increased from 2.8 million to 3 million, mostly at the Pentagon; Reagan not only reneged on his campaign pledge to get rid of two Cabinet agencies – Energy and Education – he added a new one, Veterans Affairs.

Bush the First often made public statements that were far to the right of his actual beliefs in order to get elected. He knew coming into office handicapped by a huge budget deficit from the Reagan years that he would have to break his campaign pledge not to raise taxes, and he would also have to cut some of the runaway military spending.

He was fully aware that the Far Right wing of the party was dangerous – in 1988, he said of an encounter with a Pat Roberts follower who refused to shake his hand: “There’s something terrible about those who carry it to extremes. They’re scary. They’re there for spooky, extraordinary right-winged reasons. They don’t care about Party. They don’t care about anything. They’re the excesses. They could be Nazis, they could be Communists, they could be whatever. In this case, they’re religious fanatics and they’re spooky. They will destroy this party if they’re permitted to take over.” But he said it privately, and he never openly challenged them.

At the 1992 Republican National Convention in Houston, Bush knocked America’s system of public education as schools “run by government,” and disowned his greatest domestic achievement — the 1990 budget deal. “It was a mistake to go along with the Democratic tax increase,” Bush told the delegates. “And I admit it.”

Was Bush actually elected to his first term in office? We’ll never know, because the Right Wing-dominated Supreme Court usurped the control of elections from state governments, and declared Bush the winner.

George the Shrub’s administration more than doubled the national debt in eight years, adding an additional $5.849  trillion, a 101% increase over the $5.8 trillion debt at the beginning of his presidency. A big chunk of that was for the disastrous war in Iraq, which was supposed to cost less than a $100 billion, but cost $2 trillion instead.

His tax cuts on dividends and capital gains were immensely beneficial to the wealthiest Americans, but did little to help the average taxpayer, and sent the federal deficit soaring.

Even as the federal government became increasingly short of funds, and wealthy Americans built up greater and greater assets, Bush dispatched troops to Iraq, then did a second round of tax cuts for the rich in 2003. In every military conflict since the Civil War, American presidents raised taxes to help defray the costs, but not George W.

Then there’s the “enhanced interrogation techniques” – torture – of prisoners at Guantanamo, some of them held on the flimsiest speculation, without any proof of  their involvement in terrorist activities, to which Bush turned a blind or winking eye.

His “No Child Left Behind” education program has mired public school children in endless rounds of testing, but produced little if any improvement in their test scores, and actually prevented teachers from doing their jobs. Instead of students getting an education, they are only prepared for the next test.

And, while the loosening of the regulatory restrictions on Wall Street and Big Banking began in the Clinton administration, the Bush administration did nothing to rein in their greedy high-risk schemes which imploded the world economy. Millions of people were wiped out financially, yet the wealthiest have only grown ever wealthier.

Donald Trump is the culmination of every bad GOP policy, every concession to right-wing extremists, every kowtow to the “too big to fail” multinationals and giant banks, and every bit of preferential treatment given to “special interests” like the party’s super-rich and NRA donors.

Trump’s campaign slogans and hate-filled rhetoric are borrowed from Adolf Hitler, but he has no real political opinions or ethical concerns, just a willingness to say and do whatever he thinks will “close the deal.”

He has no experience that qualifies him for the presidency, and makes more political and diplomatic gaffes in a week than most candidates do during an entire campaign. Ronald Reagan lowered the presidential bar, then George W. Bush pushed it even farther down — if Donald Trump is elected, he would sink it entirely.

But the Republicans have no one to blame but themselves — with the exception of Dwight D. Eisenhower, who warned us of the dangerous growth of the military-industrial complex —the Republicans have taken the road step-by-step to the logical extreme of GOPism: Donald Trump.

Nona Blyth Cloud has lived and worked in the Los Angeles area for the past 50 years, spending much of that time commuting on the 405 Freeway. After Hollywood failed to appreciate her genius for acting and directing, she began a second career managing non-profits, from which she has retired. Nona has now resumed writing whatever comes into her head, instead of reports and pleas for funding. She lives in a small house overrun by books with her wonderful husband.
View all posts by wordcloud9 →
This entry was posted in History and tagged BROKEN PROMISES: 100 Years of Republican Campaign Slogans, Donald Trump, George H.W. Bush, George W. Bush, Herbert Hoover, Richard Nixon, Ronald Reagan, Warren G. Harding. Bookmark the permalink.
Loading Comments...
Comment
×
%d bloggers like this: