My Only Ticket Out – Poems by Mitsuye Yamada

The internment of thousands of Japanese Americans during WWII is a dark stain on United States history. There were people who spoke out against it even at the time, including First Lady Eleanor Roosevelt, but the attack on Pearl Harbor swept America with a wave of fury which drowned out the dissenting voices. Mitsuye Yasutake, 18 years old, was one of the many young Americans whose families lost their livelihoods and their homes to that wave.

Mitsuye Yamada (July 5, 1923 – ) born as Mitsuye Yasutake in Fukuoka, Japan; Japanese-American activist, feminist, fiction author, poet, essayist, editor and professor of English. Her parents were both first-generation Japanese Americans living in the U.S., but they were visiting Japan when she was born. Her father was arrested by the FBI for espionage after Pearl Harbor, so she and her family were interned at Mindoka War Relocation Center in Idaho. She was allowed to leave to attend college after she renounced loyalty to the Emperor of Japan. Her first book, Camp Notes and Other Poems, was written during the war, but was not published until 1976. She had to become a “naturalized” U.S. citizen in 1955, five years after her marriage to Yoshikasu Yamada, who was born in Hawaii, and served as a medic and a translator in the U.S. Army during WWII. Her other published works include Lighthouse, her essay “Invisibility is an Unnatural Disaster,” and Desert Run: Poems and stories.

To read “Evacuation” and “The Question of Loyalty” by Mitsuye Yamada, click

As we boarded the bus
bags on both sides
(I had never packed
two bags before
on a vacation
lasting forever)
the Seattle Times
photographer said
Smile!
so obediently I smiled
and the caption the next day
read: 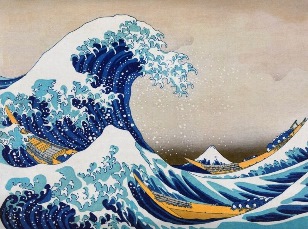 The Question of Loyalty

I met the deadline
for alien registration
once before
was numbered fingerprinted
and ordered not to travel
without permit.

But alien still they said I must
foreswear allegiance to the emperor.
For me that was easy
I didn’t even know him
but my mother who did cried out
If I sign this
What will I be?
I am doubly loyal
to my American children
also to my own people.
How can double mean nothing?
I wish no one to lose this war.
Everyone does.

I was poor
at math
I signed
my only ticket out.

Both poems are from Camp Notes and Other Writings, © 1998 by Mitsuye Yamada – Rutgers University Press

Painting: The Great Wave off Kanagawa – by Katsushika Hokusai

Nona Blyth Cloud has lived and worked in the Los Angeles area for the past 50 years, spending much of that time commuting on the 405 Freeway. After Hollywood failed to appreciate her genius for acting and directing, she began a second career managing non-profits, from which she has retired. Nona has now resumed writing whatever comes into her head, instead of reports and pleas for funding. She lives in a small house overrun by books with her wonderful husband.
View all posts by wordcloud9 →
This entry was posted in American History, Poetry, World War II and tagged Japanese American Internment, Mitsuye Yamada, My Only Ticket Out. Bookmark the permalink.
%d bloggers like this: