A Poem by Irving Feldman on the Day After His Birthday

Yesterday, the power company turned off our electricity for most of the day in order to replace some equipment, and so I was unable to post this piece on the actual date of Irving Feldman’s birthday. But I’m taking the view that a good poem is timeless, and not bound by mere dates on the calendar.

Irving Feldman (1928 – ) American poet and professor of English; born and raised in Coney Island, Brooklyn, New York. He worked as a merchant seaman, farm hand, and factory worker to pay his way through his university education. His first academic appointments were at the University of Puerto Rico and the University of Lyon in France. Returning to the continental United States in 1958, he taught at Kenyon College until 1964, when he was appointed professor of English at the University at Buffalo. He retired from teaching in 2004. His poetry collections include Works and Days, Leaping Clear, All of Us Here, Beautiful False Things, and Collected Poems: 1954-2004.

How wonderful to be understood,
to just sit here while some kind person
relieves you of the awful burden
of having to explain yourself, of having
to find other words to say what you meant,
or what you think you thought you meant,
and of the worse burden of finding no words,
of being struck dumb . . . because some bright person
has found just the right words for you — and you
have only to sit here and be grateful
for words so quiet so discerning they seem
not words but literate light, in which
your merely lucid blossoming grows lustrous.
How wonderful that is!

And how altogether wonderful it is
not to be understood, not at all, to, well,
just sit here while someone not unkindly
is saying those impossibly wrong things,
or quite possibly they’re the right things
if you are, which you’re not, that someone
— a difference, finally, so indifferent
it would be conceit not to let it pass,
unkindness, really, to spoil someone’s fun.
And so you don’t mind, you welcome the umbrage
of those high murmurings over your head,
having found, after all, you are grateful
— and you understand this, how wonderful! —
that you’ve been led to be quietly yourself,
like a root growing wise in darkness
under the light litter, the falling words. 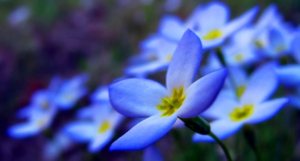 Nona Blyth Cloud has lived and worked in the Los Angeles area for the past 50 years, spending much of that time commuting on the 405 Freeway. After Hollywood failed to appreciate her genius for acting and directing, she began a second career managing non-profits, from which she has retired. Nona has now resumed writing whatever comes into her head, instead of reports and pleas for funding. She lives in a small house overrun by books with her wonderful husband.
View all posts by wordcloud9 →
This entry was posted in Poetry and tagged A Poem by Irving Feldman on the Day After His Birthday, American Poet, How Wonderful, Irving Feldman. Bookmark the permalink.
%d bloggers like this: