To Kiss the World Good-bye – In Memorium

January 27th is International Day in Memory of the Holocaust Victims.

Hana Volavková (1904-1985) was the only curator of the Central Jewish Museum to survive World War II. She collected and edited poems, letters, and drawings in a book called I Never Saw Another Butterfly, which were written by the children of Terezin Concentration Camp.

This poem from the book was written by an unnamed child who was a prisoner at Terezín. A total of 15,000 children under the age of 15 lived in the camp. Only 100 came back. This child was not one of the hundred. 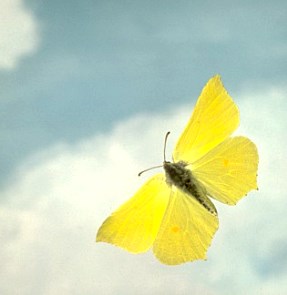 The last, the very last,
So richly, brightly, dazzlingly yellow.
Perhaps if the sun’s tears would sing
against a white stone.

Such, such a yellow
Is carried lightly way up high.
It went away I’m sure because it wished to
kiss the world good-bye.

For seven weeks I’ve lived in here,
Penned up inside this ghetto.
But I have found what I love here.
The dandelions call to me
And the white chestnut branches in the court.
Only I never saw another butterfly.

That butterfly was the last one.
Butterflies don’t live here,
in the ghetto.

“The Butterfly” from I Never Saw Another Butterfly: Children’s Drawings and Poems from Terezin Concentration Camp, 1942-1944, edited by Hana Volavková, expanded second edition © 1993 by Schocken Books. Originally published in a special edition for the State Jewish Museum in Prague in 1959.

Nona Blyth Cloud has lived and worked in the Los Angeles area for the past 50 years, spending much of that time commuting on the 405 Freeway. After Hollywood failed to appreciate her genius for acting and directing, she began a second career managing non-profits, from which she has retired. Nona has now resumed writing whatever comes into her head, instead of reports and pleas for funding. She lives in a small house overrun by books with her wonderful husband.
View all posts by wordcloud9 →
This entry was posted in Holocaust, Nazis/Nazism, Poetry and tagged I Never Saw Another Butterfly, International Day in Memory of the Holocaust Victims, Terezin Concentration Camp, To Kiss the World Good-bye - In Memorium. Bookmark the permalink.

1 Response to To Kiss the World Good-bye – In Memorium