TCS: Langston Hughes – For Livin’ I Was Born 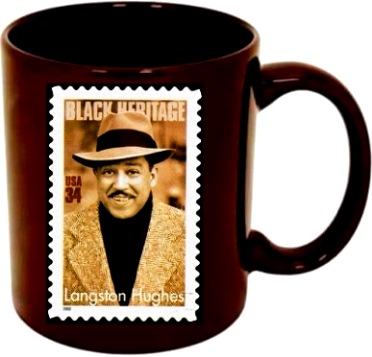 “I am so tired of waiting,
Aren’t you,
For the world to become good
And beautiful and kind?”

Langston Hughes (1902-1967) became an American poet, novelist, short story writer, non-fiction writer, and playwright. He was a major figure of the Harlem Renaissance in New York. 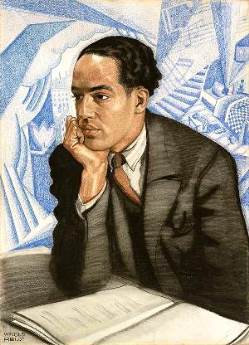 His parents divorced when he was very young, and his father moved to Mexico. He was raised by his grandmother until he was 13, then after her death, he lived with family friends, and finally went to live with his mother and her second husband. At first, they were in Lincoln, Illinois, where he began writing poetry, and then they moved to Cleveland, Ohio.

After Hughes graduated from high school, he spent a year in Mexico, briefly spending time with his father, who wanted him to be an engineer, before going to Columbia University in New York City in 1921. He earned money working as an assistant cook, a busboy, and a launderer. He quit school, and in 1923 worked his way as a seaman, travelling to West Africa, and to Paris and London.

He returned in 1924, to live in Washington, D. C., where he met and impressed the poet Vachel Lindsay, who was popular for his dramatic readings of his own work, and included three Hughes poems at his next reading, rather pompously declaring he had “discovered an American Negro genius.”

Hughes’s first book of poetry, The Weary Blues, was published by Alfred A. Knopf in 1926. He finished his college education at Lincoln University in Pennsylvania three years later. In 1930, his first novel, Not Without Laughter, won the Harmon gold medal for literature.

Hughes lived most of the rest of his life in Harlem. In the 1930s, he was drawn to Communism, seeing it as an alternative to segregation, but he never joined the Communist Party.

In 1932, he visited the Soviet Union with a group of black filmmakers invited to make a film there on the plight of the American Negro, but the project was dropped by the Soviets when the U.S. government recognized the Soviet Union and established diplomatic relations. Hughes was able to travel within the USSR before returning home. This caused him trouble in the 1950s, when he was called before the Senate Permanent Subcommittee on Investigations led by Senator Joseph McCarthy. Hughes said in his statement, “I never read the theoretical books of socialism or communism or the Democratic or Republican parties for that matter, and so my interest in whatever may be considered political has been non-theoretical, non-sectarian, and largely emotional and born out of my own need to find some way of thinking about this whole problem of myself.”

In 1954, he won the Anisfield-Wolf Book Award for Fiction, for his novel, Simple Takes a Wife. Though most of the honors and awards he received during his life were either for his novels or for his body of work, he is best remembered now for his poetry. He published 17 collections of his poems during his life, and his Collected Poems were published posthumously.

Lorraine Hansberry’s play, A Raisin in the Sun, which took Broadway by storm in 1959, takes its title from the opening lines of Langston Hughes’ poem, Harlem:

What happens to a dream deferred?

Does it dry up
like a raisin in the sun?

Langston Hughes died of cancer on May 22, 1967, in New York City, at the age of 66 – three years to the day after U.S. President Lyndon B. Johnson announced the Great Society, a set of domestic programs to end poverty and racial injustice, during a speech at the University of Michigan at Ann Arbor.

Here are a few poems from his large body of work, just a taste of his changing styles, which use both traditional rhyming forms, and jazz-influenced riffing, and range freely across contemporary themes and the span of history.

Hold fast to dreams
For if dreams die
Life is a broken-winged bird
That cannot fly.

Hold fast to dreams
For when dreams go
Life is a barren field
Frozen with snow.

Droning a drowsy syncopated tune,
Rocking back and forth to a mellow croon,
I heard a Negro play.
Down on Lenox Avenue the other night
By the pale dull pallor of an old gas light
He did a lazy sway . . .
He did a lazy sway . . .
To the tune o’ those Weary Blues.
With his ebony hands on each ivory key
He made that poor piano moan with melody.
O Blues!
Swaying to and fro on his rickety stool
He played that sad raggy tune like a musical fool.
Sweet Blues!
Coming from a black man’s soul.
O Blues!
In a deep song voice with a melancholy tone
I heard that Negro sing, that old piano moan—
“Ain’t got nobody in all this world,
Ain’t got nobody but ma self.
I’s gwine to quit ma frownin’
And put ma troubles on the shelf.”

I went down to the river,
I set down on the bank.
I tried to think but couldn’t,
So I jumped in and sank.

I came up once and hollered!
I came up twice and cried!
If that water hadn’t a-been so cold
I might’ve sunk and died.

I took the elevator
Sixteen floors above the ground.
I thought about my baby
And thought I would jump down.

So since I’m still here livin’,
I guess I will live on.
I could’ve died for love—
But for livin’ I was born

Though you may hear me holler,
And you may see me cry—
I’ll be dogged, sweet baby,
If you gonna see me die.

Will V-Day Be Me-Day Too?

Over There,
World War II.

Dear Fellow Americans,
I write this letter
Hoping times will be better
When this war
Is through.
I’m a Tan-skinned Yank
Driving a tank.
I ask, WILL V-DAY
BE ME-DAY, TOO?

I wear a U. S. uniform.
I’ve done the enemy much harm,
I’ve driven back
The Germans and the Japs,
From Burma to the Rhine.
On every battle line,
I’ve dropped defeat
Into the Fascists’ laps.

I am a Negro American
Out to defend my land
Army, Navy, Air Corps—
I am there.
I take munitions through,
I fight—or stevedore, too.
I face death the same as you do
Everywhere.

I’ve seen my buddy lying
Where he fell.
I’ve watched him dying
I promised him that I would try
To make our land a land
Where his son could be a man—
And there’d be no Jim Crow birds
Left in our sky.

So this is what I want to know:
When we see Victory’s glow,
Will you still let old Jim Crow
Hold me back?
When all those foreign folks who’ve waited—
Italians, Chinese, Danes—are liberated.
Will I still be ill-fated
Because I’m black?

Here in my own, my native land,
Will the Jim Crow laws still stand?
Will Dixie lynch me still
When I return?
Or will you comrades in arms
From the factories and the farms,
Have learned what this war
Was fought for us to learn?

When I take off my uniform,
Will I be safe from harm—
Or will you do me
As the Germans did the Jews?
When I’ve helped this world to save,
Shall I still be color’s slave?
Or will Victory change
Your antiquated views?

You can’t say I didn’t fight
To smash the Fascists’ might.
You can’t say I wasn’t with you
in each battle.
As a soldier, and a friend.
When this war comes to an end,
Will you herd me in a Jim Crow car
Like cattle?

Or will you stand up like a man
At home and take your stand
For Democracy?
That’s all I ask of you.
When we lay the guns away
To celebrate
Our Victory Day
WILL V-DAY BE ME-DAY, TOO?
That’s what I want to know.

The Negro Speaks of Rivers

I bathed in the Euphrates when dawns were young.
I built my hut near the Congo and it lulled me to sleep.
I looked upon the Nile and raised the pyramids above it.
I heard the singing of the Mississippi when Abe Lincoln
went down to New Orleans, and I’ve seen its muddy
bosom turn all golden in the sunset.

February is Black History Month in the U.S. and Canada.

Nona Blyth Cloud has lived and worked in the Los Angeles area for the past 50 years, spending much of that time commuting on the 405 Freeway. After Hollywood failed to appreciate her genius for acting and directing, she began a second career managing non-profits, from which she has retired. Nona has now resumed writing whatever comes into her head, instead of reports and pleas for funding. She lives in a small house overrun by books with her wonderful husband.
View all posts by wordcloud9 →
This entry was posted in Poetry, The Coffee Shop and tagged For Livin’ I Was Born, Langston Hughes, Lorraine Hansberry, Vachel Lindsay, Winold Reiss. Bookmark the permalink.

4 Responses to TCS: Langston Hughes – For Livin’ I Was Born