A Poem for the Lunar New Year

Lynda Hull (1954-1994), American Poet; as a teenager, she ran away from home. For the next several years, Hull lived in various Chinatowns across North America and married a Chinese immigrant. After reconnecting with her family in the early 1980s, she met poet David Wojahn during undergraduate studies at the University of Arkansas at Little Rock. They were married in 1984. She was poetry editor for the journal  Crazyhorse, and taught English at Indiana University, DePaul University, and Vermont College. Hull was the recipient of four Pushcart Prizes as well as a fellowship from the National Endowment for the Arts. Her published collections include The Only World, Star Ledger and Ghost Money. She died in a car accident at age 39.

The dragon is in the street dancing beneath windows
. . pasted with colored squares, past the man
who leans into the phone booth’s red pagoda, past
. . crates of doves and roosters veiled

until dawn. Fireworks complicate the streets
. . with sulphur as people exchange gold
and silver foil, money to appease ghosts
. . who linger, needy even in death. I am

almost invisible. Hands could pass through me
. . effortlessly. This is how it is
to be so alien that my name falls from me, grows
. . untranslatable as the shop signs,

the odors of ginseng and black fungus that idle
. . in the stairwell, the corridor where
the doors are blue months ajar. Hands
. . gesture in the smoke, the partial moon

of a face. For hours the soft numeric
. . click of mah-jongg tiles drifts
down the hallway where languid Mai trails
. . her musk of sex and narcotics.

There is no grief in this, only the old year
. . consuming itself, the door knob blazing
in my hand beneath the lightbulb’s electric jewel.
. . Between voices and fireworks

wind works bricks to dust—hush, hush—
. . no language I want to learn. I can touch
the sill worn by hands I’ll never know
. . in this room with its low table

where I brew chrysanthemum tea. The sign
. . for Jade Palace sheds green corollas
on the floor. It’s dangerous to stand here
. .in the chastening glow, darkening

my eyes in the mirror with the gulf of the rest
. . of my life widening away from me, waiting
for the man I married to pass beneath
. . the sign of the building, to climb

the five flights and say his Chinese name for me.
. . He’ll rise up out of the puzzling streets
where men pass bottles of rice liquor, where
. . the new year is liquor, the black bottle

the whole district is waiting for, like
. . some benevolent arrest—the moment
when men and women turn to each other and dissolve
. . each bad bet, every sly mischance,

the dalliance of hands. They turn in lamplight
. . the way I turn now. Wai Min is in the doorway.
He brings fish. He brings lotus root.
. . He brings me ghost money. 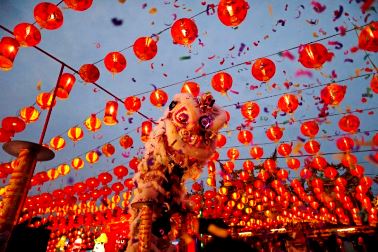 Nona Blyth Cloud has lived and worked in the Los Angeles area for over 50 years, spending much of that time commuting on the 405 Freeway. After Hollywood failed to appreciate her genius for acting and directing, she began a second career managing non-profits, from which she has retired. Nona has now resumed writing whatever comes into her head, instead of reports and pleas for funding. She lives in a small house overrun by books with her wonderful husband.
View all posts by wordcloud9 →
This entry was posted in Holidays, Poetry and tagged A Poem for the Lunar New Year, Chinese New Year, Lynda Hull. Bookmark the permalink.
Loading Comments...
%d bloggers like this: