June 30, 1966 – National Organization for Women Day: the largest U.S feminist organization is launched, and begins organizing immediately. Betty Friedan, Shirley Chisholm, Pauli Murray, and Gloria Steinem were among its first leaders. They were attending the Third National Conference of Commissions on the Status of Women, which had a theme of “Targets for Action.”

The Equal Employment Opportunity Commission (EEOC), was initiated in July, 1965, to implement Title VII of the Civil Rights Act of 1964, which prohibited employment discrimination because of gender, but the EEOC voted 3-2 in September 1965 that sex segregation in employment ads was permissible, sparking outrage among feminists. Many of the delegates wanted to pass a resolution demanding that the EEOC carry out its legal mandate to end sex discrimination in employment. They were told that they had no authority, not even to pass a resolution. Betty Friedan quietly gathered 27 other frustrated attendees, including the two members of the EEOC who had voted in favor of ending gender-segregated ads, and held a meeting in her hotel room. NOW was born. By October, 1966, there were 300 members. Today, there are 500,000 NOW members. 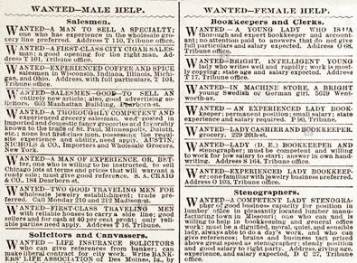 One of NOW’s first campaigns was against gender-segregated ads. In 1968, the EEOC finally ruled that help-wanted ads specifying gender were no longer permissible. NOW filed a complaint with the Pittsburgh Commission on Human Relations alleging that the Pittsburgh Press newspaper violated an ordinance which the commission had passed in alignment with the EEOC ruling against gender-segregated help-wanted ads. When Pittsburgh Press v. Pittsburgh Human Relations Commission reached the U.S. Supreme Court in 1973, the court, by a 5-4 majority, found that the Pittsburgh ordinance did not violate the newspaper’s freedom of expression, or hinder its financial profits, nor does the First Amendment protect advertisements for purely commercial reasons, and that want ads segregated by gender did violate Title VII.

Nona Blyth Cloud has lived and worked in the Los Angeles area for over 50 years, spending much of that time commuting on the 405 Freeway. After Hollywood failed to appreciate her genius for acting and directing, she began a second career managing non-profits, from which she has retired. Nona has now resumed writing whatever comes into her head, instead of reports and pleas for funding. She lives in a small house overrun by books with her wonderful husband.
View all posts by wordcloud9 →
This entry was posted in History and tagged Betty Friedan, Equal Employment Opportunity Commission, Feminism, Gloria Steinem, National Organization for Women, NOW, Pauli Murray, Shirley Chisholm, Title VII of the Civil Rights Act of 1964. Bookmark the permalink.
Loading Comments...
%d bloggers like this: