Washington D.C. Jihadists: There Be Lions

“Woe to you, teachers of the law and Pharisees, you hypocrites! You shut the door of the kingdom of heaven in people’s faces. You yourselves do not enter, nor will you let those enter who are trying to.” Matthew 23:13 – 15

Even though we are helpless to change things on a macro scale, we can in our own small ways, align with love and the positive. As we contribute our quota, we are building towards a critical mass which can force change/s for good.

Congressman Cawthorne’s histrionic, clarion call was laser-focused on white Christian evangelicals. It was a bad faith, naked ploy to stoke fear of, and incite violent action, against perceived enemies. His reckless appeal to base human instincts, turns Christianity on its head, and makes a mockery of the core tenets of the religion. Posing as a champion of the Christian faith, and cloaking himself in the aura and lingo of Christianity, Cawthorne’s hate speech is heretical. In stirring the pot of imaginary threats and ginned-up persecution, he absurdly compares himself and his gullible audience to Old Testament heroes and heroines, such as King David, Queen Esther and Lions’ Den Daniel.

Followers of Christ are commanded to pursue the path of love, peace and unity and  to eschew hate and violence. We are to serve as earthly ambassadors of a Saviour, who is the embodiment of love, mercy, compassion, truth and justice. No where in the holy-writ are we told to fight our fellow-man. Indeed, after personal salvation, the primary obligation of a Christian, is soul-winning, in compliance with the Great Commission.  In referencing  Old Testament accounts soley, Cawthorne, cynically chooses to trample on the sacrifice and teachings of Christ, which form the foundation and capstone of Christianity.

The hallmarks of Trumpism are chaos, hate, division, lies and corruption. Appallingly, white Christian evangelical leaders have repeatedly, overtly or tacitly, endorsed Trumpism; ostensibly, to gain proximity to political power and its accoutrements. They have not rebuked Cawthorne for his reckless provocation and goading of members of the body of Christ, whom they shepherd, and whose souls they are accountable for.  Indeed, the most vocal among them were radio-silent following the 2019 massacre of dozens of innocent Muslims in a mosque in New Zealand.  The gunman’s manifesto was described by Australian Prime Minister, Scott Morrison, as a “work of hate”  which hailed Trump as “a symbol of renewed white identity and common purpose.”

As proponents of Trumpism continue to stir up antipathy against certain populations, their heinous attacks, will be amplified by bottom-feeders in the ranks of white supremacy protagonists; resulting in the perpetration of acts of gratuitous violence. This outcome seems inevitable, as the lines between the white supremacist subculture and white evangelical Christians, both lynchpins of the Trump base, are fluid and clouded. There exists an undeniable level of mutual sympathy, and symbiosis, between the groups. Thus, leading one to wonder if the violent wing of white supremacy, has morphed into the “militant arm” of white Christian evangelicals.

Cawthorne’s rhetoric is a disservice and danger, to religiously and ethnically,  diverse communities, existing in huge numbers around the world. For many of these heterogeneous communities, peaceable co-existence is a delicate balancing act, warranting utmost care and concerted diligence, to avoid setting off incendiary devices, incessantly bubbling below the surface.

“Watch out for false prophets. They come to you in sheep’s clothing, but inwardly they are ferocious wolves.” Matthew 7:15 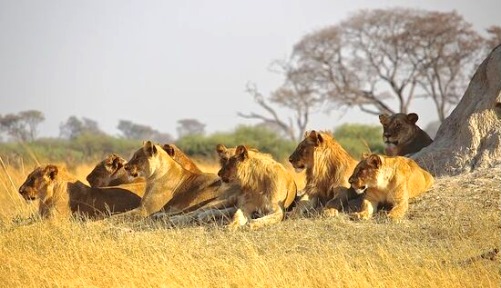 Majestic, golden lions adorn the motherland
Marvels of creation, serene, noble royalty
Basking in the African sun, restless and in need
Lesser creatures fearfully cower, paying fealty
Kings of nature, bestir themselves to feed,
Their hapless prey, no match for the regal breed.
There be lions!

With brute force, the faithless, cowardly, rogue pride
Feral, militant; ambush, attack and ruthlessly ride
Claiming swing-states in their ungainly, despotic stride
Futilely roar, fill the airwaves, enlisting angels from Africa
Alas, their swampy dens, are no Basilica
nor, Capitol Hill, a shrine to Fatima
Adversaries of democracy; O! Athens-Attica!
There be lions!

In dark corridors of power, they prowl
To scoff and scowl, cheek by jowl
Democracy in their keen, cruel sights
Seeking its demise by means most foul
Knife-long teeth, shred the truth, expose the blight
Will democracy survive the endless night?
There be lions!

Nona Blyth Cloud has lived and worked in the Los Angeles area for the past 50 years, spending much of that time commuting on the 405 Freeway. After Hollywood failed to appreciate her genius for acting and directing, she began a second career managing non-profits, from which she has retired. Nona has now resumed writing whatever comes into her head, instead of reports and pleas for funding. She lives in a small house overrun by books with her wonderful husband.
View all posts by wordcloud9 →
This entry was posted in Poetry and tagged Congressman Madison Cathrorn, False Prophets, Old Testament, There Be Lions, trumpism, Washington DC Jihadists, White Christian Evangelicals. Bookmark the permalink.
Loading Comments...
%d bloggers like this: