Taras Hryhorovych Shevchenko (1814-1861) also known as Kobzar (Bard); Ukrainan poet, author, painter, folklorist, ethnographer, and champion of Ukrainian independence. His literary works are regarded as the foundation of modern Ukrainian literature and, to a large extent, of the modern Ukrainian language.

In 1847, Shevchenko was arrested and convicted for explicitly promoting the independence of Ukraine; for writing poems in the Ukrainian language, which was forbidden by the Russians; and for ridiculing members of the Russian Imperial House. He was exiled as a private to the Russian military garrison in Orenburg near the Ural Mountains – “Under the strictest surveillance, without the right to write or paint” – and sent on a forced march from Saint Petersburg to Orenburg – 1778 kilometers (1105 miles) away. In 1848, he was assigned to the first Russian naval expedition to the Aral Sea, which lies between Kazakhstan and Uzbekistan. He was tasked by the lieutenant in charge of the expedition to sketch the landscapes around the coast of the Aral Sea. After an 18-month voyage, Shevchenko returned with his album of drawings and paintings to Orenburg. He was then sent to one of the worst penal settlements, the remote fortress of Novopetrovsk, where he spent seven terrible years. In 1851, he was assigned to the Mangyshlak (Karatau) geological expedition. In 1857, Shevchenko finally returned from exile after receiving amnesty from a new emperor, though he was forced to stay in Nizhniy Novgorod, at the confluence of the Oka and Volga rivers in central Russia.

In May 1859, Shevchenko got permission to return to Ukraine.  In July, he was arrested again, this time on a charge of blasphemy. He was released, but ordered to return to St. Petersburg. He spent the last years of his life working on new poetry, paintings, and engravings, and editing his older works.

The years of exile had taken their toll, and Shevchenko died in Saint Petersburg in March, 1861, at the age of 47. He was first buried in Saint Petersburg, but his friends arranged the transfer of his remains by train to Moscow and then by horse-drawn wagon to his homeland. Shevchenko was re-buried on the Chernecha hora (Monk’s Hill; today Taras Hill) near the Dnipro River. A tall mound was erected over his grave, now a memorial part of the Kaniv Museum-Preserve.

When I die, then make my grave
High on an ancient mound,
In my own beloved Ukraine,
In steppeland without bound:
Whence one may see wide-skirted wheatland,
Dnipro’s steep-cliffed shore,
There whence one may hear the blustering
River wildly roar.
Till from Ukraine to the blue sea
It bears in fierce endeavour
The blood of foemen — then I’ll leave
Wheatland and hills forever:
Leave all behind, soar up until
Before the throne of God
I’ll make my prayer. For till that hour
I shall know naught of God.
Make my grave there — and arise,
Sundering your chains,
Bless your freedom with the blood
Of foemen’s evil veins!
Then in that great family,
A family new and free,
Do not forget, with good intent
Speak quietly of me. 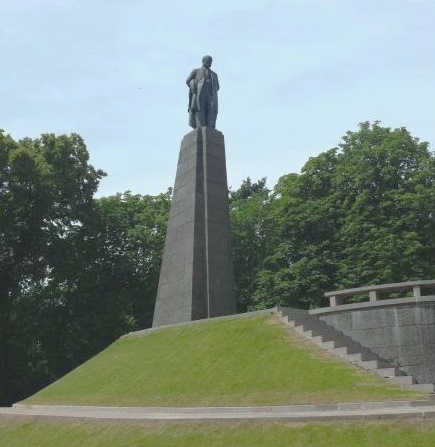 Nona Blyth Cloud has lived and worked in the Los Angeles area for the past 50 years, spending much of that time commuting on the 405 Freeway. After Hollywood failed to appreciate her genius for acting and directing, she began a second career managing non-profits, from which she has retired. Nona has now resumed writing whatever comes into her head, instead of reports and pleas for funding. She lives in a small house overrun by books with her wonderful husband.
View all posts by wordcloud9 →
This entry was posted in Poetry, Ukraine and tagged Champion of Ukrainian independence, Kobzar, Taras Shevchenko, Testament by the Bard of Ukraine – in 1845, Zapovit. Bookmark the permalink.
Loading Comments...
%d bloggers like this: