The Dissenting Justices on the U.S. Supreme Court

The other six justices voted to turn back women’s rights to the 1950s,
but they will not stop there.

The Witch Hunts of the 21st Century are just beginning.

To read what Justices Kagan, Sotomayor and Breyer
wrote in their dissent, click: 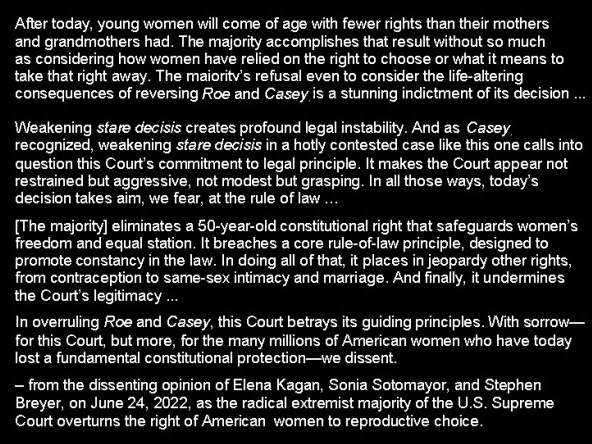 Nona Blyth Cloud has lived and worked in the Los Angeles area for the past 50 years, spending much of that time commuting on the 405 Freeway. After Hollywood failed to appreciate her genius for acting and directing, she began a second career managing non-profits, from which she has retired. Nona has now resumed writing whatever comes into her head, instead of reports and pleas for funding. She lives in a small house overrun by books with her wonderful husband.
View all posts by wordcloud9 →
This entry was posted in Constitutional Law, Women's Rights and tagged Dissenting Justices on US Supreme Court, Justice Elena Kagan, Justice Sonia Sotomayor, Justice Stephen Breyer, RoeVWade. Bookmark the permalink.

4 Responses to The Dissenting Justices on the U.S. Supreme Court