Prayer on the Football Field 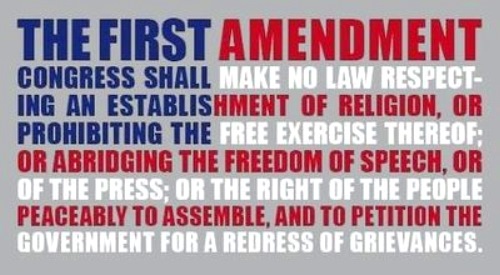 Among the attacks on the Constitution this week by the six extremist Justices on the U.S. Supreme Court, they decided that a football coach must have the right to pray on the 50 yard line of the football field at the public high school where he is employed – because “Religious Freedom.”

While some may think this is upholding Religous Freedom, or that it is no big deal, what this majority of Justices have done is nullify the other part of Religious Freedom – the right to freedom from Religion. That no one has the right in America to impose their religious beliefs on someone else – that the state cannot promote religion, nor can it favor any one religion over any other religions, and that citizens have the right not to hold any religious beliefs at all.

Do you think if Coach tells his players to join him in prayer that they will not feel pressured to do so? This employee of a public school is a “state actor,” that is, a representative of the government, and if he says “let us pray” then he is using his authority over the students on his team, to endorse, indeed to attempt to compel, prayer in public schools.

On January 15, 2018, I posted A Dangerous Silence in Public Schools – I am reposting it here because it covers why prayer in schools is a major Constitutional issue – click to read:

Tomorrow is a national day which many Americans don’t know about: National Religious Freedom Day. It celebrates the Virginia Statute for Religious Freedom, written by Thomas Jefferson, and passed by the Virginia Assembly on January 16, 1786. It became the basis for the religious freedom section of the First Amendment to the U.S. Constitution.

In the 18th century, having a state religion, and imposing restrictions on all other religions, was the usual practice of national governments. There are still many theocracies in the world today, but the idea of separating religion from government has taken hold.

Unfortunately, it is now under threat here in “the land of the free.”

Amendment I. Congress shall make no law respecting an establishment of religion, or prohibiting the free exercise thereof; or abridging the freedom of speech, or of the press; or the right of the people peaceably to assemble, and to petition the government for a redress of grievances.

– First Amendment of the United States Constitution,
one of the Bill of Rights

“We have a complex system of government.
You have to teach it to every generation.”

“The Establishment Clause prohibits government from making adherence to a religion relevant in any way to a person’s standing in the political community.”

“Those who would renegotiate the boundaries between church and state must therefore answer a difficult question: Why would we trade a system that has served us so well for one that has served others so poorly?”

Sandra Day O’Connor was appointed by Ronald Reagan, and while her overall support for the First Amendment was firm, she was certainly no liberal. She didn’t see any harm in a “moment of silence” in the classroom.

“A moment of silence is not inherently religious.”

“It is difficult to discern a serious threat to religious liberty from a room of silent, thoughtful schoolchildren.”

The problem is that individual teachers can, and have, acted on their personal religious convictions to turn “a moment of silence” into “silent prayer.” Then some of the students in that classroom, taking cues from their teacher, and maybe their own family’s expressed religious beliefs, have ostracized or harassed any child who does not participate. It’s a very slippery slope.

The right to express your religious views, and to participate in a faith you have freely chosen is extremely important, but the right not to participate in any religious-related activity is just as important. The laws upholding the First Amendment must be clear and unequivocal.

In 2017, there were over 98,000 K-12 classrooms in the U.S., for more than 50 million students, and staffed by 3.2 million full-time teachers.  If only one percent of these teachers had a strong belief that their faith was the only “True Faith” and that children should be taught to pray, that’s 32,000 teachers who have the potential to turn that “moment of silence” into daily prayer in a public school classroom. Non-religious parents will complain, and if their complaint is ignored, they can file a lawsuit against the school district, but not before their child has been traumatized, and the rest of the class divided into bullies and silent witnesses.

What child is equipped to deal with such a situation?  It’s not just the child whose family doesn’t believe in prayer who is harmed, it is every child in that classroom. Some will have learned to be bullies, while the rest have learned to ignore injustice, or to keep their mouths shut to avoid becoming the next target.

In October 2007, the state of Illinois began requiring its public schools to lead students each morning in a moment of silence for “reflection and student prayer.” Illinois already had a law on the books permitting schools to lead such moments of silence. But the Illinois General Assembly, overriding Governor Rod Blagojevich’s veto, decided to strengthen the law by making moments of silence a requirement. Atheist Rob Sherman and his daughter, Dawn, a freshman at Buffalo Grove High School in Buffalo Grove, Ill., sued her school district, claiming that the new state requirement violated the U.S. Constitution.

Shortly thereafter, the Illinois House of Representatives voted to repeal the law so that a moment of silence would once again be permitted rather than mandated; the Illinois Senate, however, had not yet voted on the bill. Meanwhile, U.S. District Judge Robert Gettleman hearing Sherman’s claim found that the Illinois law is probably unconstitutional and blocked not only her school district but all Illinois school districts from requiring a moment of silence. But this was only a temporary order. On October 15, 2010, the U.S. 7th Circuit Court of Appeals ruled that the law was constitutional because it didn’t specify prayer, in spite of it being called the “Silent Reflection and Student Prayer Act.”

The Supreme Court has repeatedly stressed that government actions in such matters must have a clearly secular purpose. In its only ruling on moment-of-silence statutes, Wallace v. Jaffree (1985), the court, by a 6-3 vote, invalidated an Alabama moment-of-silence law largely because its sponsor admitted that the statute’s sole purpose was “to return voluntary prayer to our public schools.”

The law was struck down because the silent observance was described as a time when teachers would instruct willing students to pray, and the others to meditate silently. The suggestion by a state actor that students use the time for prayer amounted to a state endorsement of religion, which is impermissible under the First Amendment. But in a concurring opinion that has influenced subsequent lower court decisions, Justice Sandra Day O’Connor wrote that she would have upheld the Alabama law if the legislature had shown a genuine secular purpose in passing it. Indeed, she explained, school-led moments of silence, unlike school-led prayers, are often permissible because they are not inherently religious and do not coerce participation in a religious act.

The majority opinion in Wallace along with Justice O’Connor’s concurrence had the Janus-like effect of striking down the Alabama moment-of-silence statute while simultaneously suggesting to lower courts that they may uphold such laws in certain circumstances – namely, when the laws have a secular purpose. Lower courts have responded to the high court’s signals. Before the Wallace ruling, almost all courts that heard challenges to moment-of-silence statutes found such laws to be unconstitutional; since 1985, however, almost all court decisions have upheld moment-of-silence laws.

In Croft v. Perry (2008), a U.S. District Court upheld a Texas law that mandates teachers to lead students in a moment of silence during which students may pray or engage in any other silent activity. The district court acknowledged that the case presented “a close question because the Texas legislature was less than clear in articulating the [statute’s] secular purpose.” Nevertheless, the court upheld the law because it said the various committee meetings and floor debates on the bill indicated that the Texas legislature genuinely sought to accomplish the secular purpose of promoting “contemplation, seriousness and reverence.” This decision was appealed before the 5th U.S. Circuit Court of Appeals.

I have two questions here: How does a teacher “lead” a moment of silence?

That implies that he or she must give some kind of directions to their students on what they are to do. If they say anything other than, “We will now be silent for one minute” they can very easily cross that thin line from a moment of silence into something non-secular.

And secondly, I wonder about the use of the word “reverence.”

What are students being encouraged to be reverent about? Synonyms for “reverence” include adoration, devoutness, genuflection, and religiousness. These are not secular terms or ideas.

So while it was difficult for Sandra Day O’Connor “to discern a serious threat to religious liberty from a room of silent, thoughtful schoolchildren,” I can see a threat to freedom from religion, which is just as important a right for Americans as the right to follow the beliefs and practices of the church, synagogue, mosque, or temple of one’s choice.

Already, the current Administration, without opposition from the Republican majority in both houses of Congress, is trying to stifle media reports and protests that go against their agenda. A substantial proportion of their supporters are far-right fundamentalist and evangelical Christians, people who have a history of always turning out to vote for those candidates who at least pay lip-service to their beliefs and goals. These voters want to turn America into a theocracy, and the Republicans must continue to placate them in order to win elections. The huge increase in anti-abortion bills becoming law all across the nation, even though poll after poll shows that the majority of Americans are in favor of keeping abortion legal, is proof of their political clout.

Because the Republican majority in Congress refused to even hold hearings on most of President Obama’s candidates for the federal bench, there are many vacancies. Trump’s candidates will undoubtedly be more likely to rule in favor of prayer in school – it’s an easy way to keep the loyalty of those right-wing evangelical and fundamentalist voters. That will outweigh whatever distaste these “devout Christians” might have for Trump’s personal and comprehensive violation of the commandments against committing adultery, bearing false witness and coveting.

And I wonder if they consider golf on the Sabbath a form of prayer?

Please celebrate Religious Freedom Day tomorrow. It may be our last chance.

Case citings and rulings from:

Nona Blyth Cloud has lived and worked in the Los Angeles area for the past 50 years, spending much of that time commuting on the 405 Freeway. After Hollywood failed to appreciate her genius for acting and directing, she began a second career managing non-profits, from which she has retired. Nona has now resumed writing whatever comes into her head, instead of reports and pleas for funding. She lives in a small house overrun by books with her wonderful husband.
View all posts by wordcloud9 →
This entry was posted in United States and tagged A Dangerous Silence in Public Schools, Freedom From Religion, Prayer in Public Schools, Prayer on the Football Field, Religious Freedom, The U.S. Constitution, The U.S. Supreme Court. Bookmark the permalink.

3 Responses to Prayer on the Football Field