These Are the Times That Try Men’s Souls

“THESE are the times that try men’s souls. The summer soldier and the sunshine patriot will, in this crisis, shrink from the service of their country; but he that stands by it now, deserves the love and thanks of man and woman. Tyranny, like hell, is not easily conquered; yet we have this consolation with us, that the harder the conflict, the more glorious the triumph. What we obtain too cheap, we esteem too lightly: it is dearness only that gives every thing its value.”

Thomas Paine was born in England on February 9, 1737. Paine emigrated to the British American colonies in 1774 with the help of Benjamin Franklin, arriving just in time to help spark the American Revolution. Virtually every rebel read (or listened to a reading of) his 47-page pamphlet Common Sense, proportionally the all-time best-selling American title, which catalysed the rebellious demand for independence from Great Britain. The American Crisis was a pro-revolutionary pamphlet series of essays, later collected into a book. The first pamphlet was published in December 1776. General Washington found this first essay so inspiring, he ordered that it be read to the troops at Valley Forge.

I think that Thomas Paine should be considered the “forgotten” Founding Father. Though he never held public office, he certainly had as much influence on the American Revolution and the establishment of the new country’s system of government as most of the men who are now called our Founding Fathers.

And much of what he wrote then is still very relevant to our current American crisis. 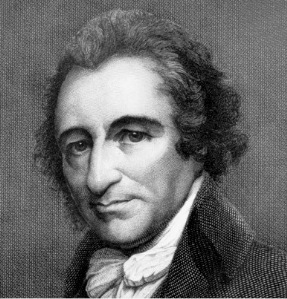 Persecution is not an original feature in any religion; but it is always the strongly marked feature of all religions established by law. ― Thomas Paine, The Age of Reason

Reason obeys itself; and ignorance submits to whatever is dictated to it.

When men yield up the privilege of thinking, the last shadow of liberty quits the horizon.

It is error only, and not truth, that shrinks from inquiry.

A body of men holding themselves accountable to nobody ought not to be trusted by anybody.

He that would make his own liberty secure, must guard even his enemy from oppression; for if he violates this duty, he establishes a precedent that will reach to himself.

We have it in our power to begin the world over again.

Nona Blyth Cloud has lived and worked in the Los Angeles area for over 50 years, spending much of that time commuting on the 405 Freeway. After Hollywood failed to appreciate her genius for acting and directing, she began a second career managing non-profits, from which she has retired. Nona has now resumed writing whatever comes into her head, instead of reports and pleas for funding. She lives in a small house overrun by books with her wonderful husband.
View all posts by wordcloud9 →
This entry was posted in American History and tagged American Constitutional crisis, American Revolution, Civil Rights, The Age of Reason, These Are the Times That Try Men's Souls, Thomas Paine. Bookmark the permalink.