Jet Fuel From Seawater: No longer a pipe dream

This did not exactly come as a news story to me. I had this discussion with one of my best friends from high school years ago. Normally, a discussion with a former next door neighbor doesn’t amount to much in the total scheme of things. Especially when the neighbors are a couple of teenagers. However, every October I watch the Nobel awards announcements for my friend’s name. Not yet, but maybe one of these days. At any rate, he told me about some of the technology advances not generally known to the public, and that it would only be a matter of time.

I might add that he is of the opinion that none of the current alternatives to fossil fuels are completely environmentally friendly. However, the survival of our civilization makes it incumbent on us to keep looking. In one of our discussions, I mentioned that we have a lot of water on the surface of the globe, and that water comprises the perfect fuel. Hydrogen is pure fuel, and oxygen the purest oxidizer. The only fly in the ointment is that little thing called the First Law of Thermodynamics. The chemical bond between the two elements is one of the tightest possible, and it takes energy to break it. Recombining the two is relatively easy. A physicist once quipped that hydrogen is the perfect fuel, but if somebody wants to set up a pure hydrogen service station, he would prefer to watch the results from the next county. 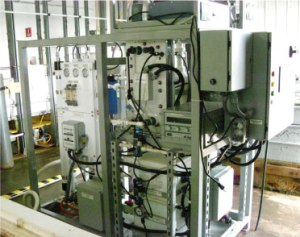 The U.S. Naval Research Laboratory (NRL), Materials Science and Technology Division has been experimenting with a proof of concept to convert sea water to jet fuel. They built a proof-of-concept carbon capture “skid” which extracts carbon dioxide and hydrogen gas from seawater. A gas-to-liquids process is then used to to convert the CO2 and H2 into jet fuel. An interesting factoid about JP-5 jet fuel. It has about the same flash point as diesel fuel, meaning that it can be used in both high performance jet engines as well as ordinary diesel engines, with no power or weight penalty to either. Tweak the product a little more, rearranging carbon and hydrogen atoms here and there, and you have gasoline.

Taking on fuel while under way (US Navy photo)

The Navy has a particular interest in this technology, because an aircraft carrier that can make fuel for its own jet aircraft won’t have to rely on a supply chain thousands of miles long, or buy fuel in foreign ports. We cannot assume that in time of conflict such ports would be available. Additionally, refueling at sea is a dangerous operation even in good weather, and a carrier is at its most vulnerable when tied to a fuel tender.

The project is still in the proof of concept stage, but is promising. The lab is in the process of moving on to the next stage to make it operational. When the technology is advanced enough to deploy, the Navy estimates that it will cost between $3.00 to $6.00 to make a gallon for JP-5 out of seawater. That may seem like a lot, but to put it into perspective, consider what a twelve-thousand-mile long supply line costs per gallon of JP-5. Besides, at the local airport where I have my office, the current price of jet fuel is $5.29/gallon, and 100 octane low-lead aviation gas is $5.99/gallon.

There is another consideration, and that is the inexorable manner in which technology advances, both physically and economically. When I was in grad school our Department got a new calculator. I was thrilled because it would extract square roots, and we no longer had to use the old Monroe, which had what seemed like 30,000 moving parts. That four-function desktop calculator, which would also extract square roots, cost the department $1,200. Accounting for inflation, that would be $6,593 dollars in 2013 money. A calculator with the same computing power can now be bought off the 99¢ rack at the supermarket.

What does this mean in the long term? It means that as technology advances, a corollary to Moore’s Law comes into effect. The more we learn, the better we get with the technology. The better and faster we make widgets, the price of widgets comes down. Exponentially.

Now to the, “Why am I not surprised department.”

I read yesterday on a news web site that several Republican congresscritters want to block funding for the Navy research of seawater into fuel until it is fully developed. Say what? Block research until it springs full grown from what?

Let’s take a look at the way pure science works in the real world.

He explained, “The chemist manages to deposit a little spot of a new compound on the inside wall of a test tube. He then tells the chemical engineer how he did it. It is up to the chemical engineer to replicate the deposit, but make it coat the surface evenly and in a predictable manner.”

About that First Law. An aircraft carrier doesn’t have to worry about it. Nimitz class carriers are powered by two big A4W nuclear reactors. They have power to spare, since they already hold back about 140 megawatts of power as a reserve. Additionally, the process involves more than just electricity. There are catalysts at work, along with electrolysis. It is a mixture of chemistry and biology.

There are obvious questions about using batteries. The energy density of a battery is only a fraction of that of hydrocarbon fuel of the same mass. Also, batteries don’t last long enough for a patrol plane to fly an hours-long mission, and batteries cannot be aerial refueled.

We are looking at liquid fuel for a long time into the future. One of the things that makes the First Law irrelevant for conversion of seawater into a liquid fuel is the simple fact we have a huge store of renewable, and excess, energy from stationary sources. Those stationary sources are capable of extracting and converting hydrocarbons from sea water. One cannot stuff a wind turbine, nuclear reactor or hydroelectric plant into an airplane….or 18-wheel-truck. But, we can use them to make ordinary hydrocarbon fuel that is cleaner and less polluting than any fossil fuel source.

This is what the Oil Maggots fear. That it will work.

For our science geeks, here is a (relatively) simple explanation of the process. Warning: science and math at the link.

Are there naysayers? Of course. A quick internet search reveals many sites claiming “hoax.” or alternately, if it is real, it will never be practical. Where have we heard that before? In the 1950s, no one could have conceived of a computer smaller than a freight car, or that there would ever be a market for a personal computer.

Back to my old friend. We were high school students, and one summer night we started talking about the possibility of building a cannon that used electricity instead of gunpowder. I started drawing plans for the thing on a piece of notebook paper on the hood of a car. A small coil would accelerate a steel nail to a surprising speed in the distance of a few inches, which was the size of our coil.

We got distracted with other things, like the ham radio club. Then there was the little matter of the mash we had fermenting in an old churn under the stairwell of his house. I am sure his mom could smell it. What surprised us was the amount of mash it took to make a thimbleful of 100 proof. Geek kids are easily distracted.

We should have patented that damn electric cannon.

68 Responses to Jet Fuel From Seawater: No longer a pipe dream