Who the F*ck is Dan Loeb and How Is He Connected to Teacher Pensions and School Reformers?

I have focused much of my time lately doing research on anti-teacher/anti-tenure school reformers—including Campbell Brown, David Boies, and Michelle Rhee. In my post about school reformer/star lawyer David Boies, I noted how certain names kept “popping up in the groups leading the charge to eliminate due process for teachers and to establish more charter schools.” It seemed almost “incestuous” to me. I provided a little breakdown of the connections between the people serving on the boards of organizations hoping to eliminate teacher tenure.

I’m re-posting that breakdown for you here:

– Adrian Fenty is a member of the Board of Directors of Democrats for Education Reform (DFER). Fenty was the mayor who hired Michele Rhee to manage the schools in Washington, D.C.

– David Boies serves on the Board of Directors of Campbell Brown’s group Partnership for Educational Justice—as does Joe Williams who is the Executive Director of Democrats for Education Reform (DFER).

– Michelle Rhee and Joel Klein also serve as members of the StudentsFirst National Board of Directors.

– Campbell Brown Serves on the Board of Directors of Moskowitz’s Success Academy.

One name that I failed to include in my breakdown was Dan Loeb. I also neglected to point out that some so-called school reformers are eager to eliminate defined benefit pensions for public school teachers. You may be wondering who the f*ck Dan Loeb is and what he has to do with teacher pensions and school reform. Loeb is a co-founder of StudentsFirstNY. He manages a hedge fund known as Third Point LLC. (FYI: It has been reported that Loeb earned $380 million in 2012.)

Edited to add: Loeb is also a member of the Board of Directors of Eva Moskowitz’s Success Academy Charter Schools.

In April 2013, Matt Taibbi wrote the following about Loeb:

Dan Loeb…is on the board and co-founder of a group called Students First New York. And the national Students First organization has been one of the leading advocates pushing for states to abandon defined benefit plans – packages which guarantee certain retirement benefits for public workers like teachers – in favor of defined contribution plans, where the benefits are not guaranteed.

In other words, Loeb has been soliciting the retirement money of public workers, then turning right around and lobbying for those same workers to lose their benefits. He’s essentially asking workers to pay for their own disenfranchisement (with Loeb getting his two-and-twenty cut, or whatever obscene percentage of their retirement monies he will charge as a fee). If that isn’t the very definition of balls, I don’t know what is.

It’s one thing for a group like Students First to have an opinion about defined benefit plans in general, to say, as they have, that “today’s district pensions and other benefits are not sustainable and contribute to a looming fiscal crisis.” But it’s another thing for a CFO of Students First like Rebecca Sibilia to tweet the following just a few weeks before one of its state chapter board members asks for money from a fund like CalSTRS:

That’s a hell of a sales pitch for Loeb to be making: “I belong to an organization that thinks you’re all dinosaurs. Now give me a hundred million dollars.”

Taibbi said that Loeb isn’t the only hedge fund manager with a “God complex” who takes money from public employees while “simultaneously” working with StudentsFirst. He added, “Paul Tudor Jones of Tudor Investment Corp. is another – he’s on the SFNY board with Loeb and manages $15.7 million from the School Employees’ Retirement System of Ohio.”

(Note: Gina Raimondo, a Democrat, is the State Treasurer of Rhode Island.)

According to Matt Taibbi, the state of Rhode Island declared war on public pensions and rammed “through an ingenious new law slashing benefits of state employees with a speed and ferocity seldom before seen by any local government.” Gina Raimondo spearheaded this effort as a means to avert a “looming pension crisis.” Raimondo’s reform plan—known as the Rhode Island Retirement Security Act of 2011—was “hailed as the most comprehensive pension reform ever implemented.” Reportedly, some people in the state were “overwhelmed” and didn’t know how to react to the pension reform being instituted in their state. Paul Doughty, president of the Providence firefighters union, was quoted as saying: “She’s Yale, Harvard, Oxford – she worked on Wall Street. Nobody wanted to be the first to raise his hand and admit he didn’t know what the f*ck she was talking about.”

Maybe that’s the way Raimondo, a Rhodes Scholar, wanted it. After all, people can’t complain about the bad things that might happen to their retirement pensions and benefits if they don’t know what’s really going on.

Taibbi said that no one was aware “that part of Raimondo’s strategy for saving money involved handing more than $1 billion – 14 percent of the state fund – to hedge funds, including a trio of well-known New York-based funds: Dan Loeb’s Third Point Capital was given $66 million, Ken Garschina’s Mason Capital got $64 million and $70 million went to Paul Singer’s Elliott Management.” These hedge funds will be paid “tens of millions in fees every single year…” Taibbi adds that Loeb, Garschina and Singer all serve on the board of the Manhattan Institute, “a prominent conservative think tank with a history of supporting benefit-slashing reforms.” (Note: Raimondo was named the Manhattan Institute’s “Urban Innovator” of the year in 2011.)

In my RIL post, I also wrote the following:

Reuters reported last fall that Raimondo’s “bold” pension reform legislation “eliminated cost-of-living adjustments (COLAs) for public pensions and moved all new employees out of traditional pensions and into defined contribution plans.” In addition, it froze current workers’ accrued benefits and raised the retirement age. Reuters said that the pension changes were being challenged in court.

It appears Rhode Island officials were worried that they might lose in court. That’s probably why they hired the celebrated star attorney DAVID BOIES to help defend against the unions’ legal challenges to the pension cuts! Bob Plain (RI Future.org) reported that Boies was “defending Raimondo and her pension plan at a great discount…” Boies “said he agreed to take the case because he believes that pension changes are needed across the U.S.”

Rhode Island Public Radio (RIPR) reported in April of this year that Superior Court Judge Sarah Taft-Carter had denied the state’s motion to dismiss a lawsuit challenging the 2011 overhaul of Rhode Island’s pension system. RIPR said that in her ruling Taft-Carter found that there was “an implied in-fact contract” between the state and the public employees challenging the pension overhaul.

Interesting, don’t you think, that Dan Loeb and David Boies serve together on the board of directors of StudentsFirstNY, a local affiliate of Michelle Rhee’s StudentsFirst national organization that “has been one of the leading advocates pushing for states to abandon defined benefit plans?????” Don’t you find it interesting, too, that both men are involved with Gina Raimondo and what’s going on with public employees’ pensions in Rhode Island?

A Few More Bits of Information about Dan Loeb and StudentsFirstNY

Evidently, Loeb is “escalating” a battle over public worker pensions between hedge fund managers and Randi Weingarten, president of the American Federation of Teachers.

Loeb, who manages $13.6 billion, had fellow hedge-fund chiefs Paul Tudor Jones, David Tepper and Paul Singer applauding in the ballroom of Manhattan’s Mandarin Oriental Hotel last month as he donated an extra $1 million to a group of charter schools to show his opposition to the head of the second-biggest U.S. teachers union.

In April, the union included the four billionaires on its “watch list” of money managers that support groups the labor organization said are hostile to traditional public pensions. The groups included StudentsFirst, an organization that backs eliminating tenure and funding charter schools at the same level as public ones.

“Some of you in this room have come under attack for supporting charter-school education reform and freedom in general,” Loeb told the audience. To show opposition to Weingarten, the “leader of this attack,” Loeb, 51, boosted his pledge to the nonprofit Success Academy Charter Schools in New York City, where he’s a director, to $3 million from $2 million.

States and municipalities seeking to boost returns for their retirement funds have invested billions of dollars with hedge funds. The AFT wants pension trustees to consider fund managers’ ties to groups that oppose defined-benefit retirement systems as a reason when hiring or firing them. Critics say that threatens the managers’ livelihoods.

StudentsFirst NY, an arm of the national StudentsFirst organization headed by former Washington, D.C., Chancellor Michelle Rhee, was officially formed this spring “to counter the influence of the teachers’ union in New York,” according to a headline in The New York Times. State Director Micah Lasher, the former director of state legislative affairs for New York City Mayor Michael Bloomberg, said the group’s aim is to raise $10 million annually for five years.

On the board are some polarizing figures in public education including Rhee, former chancellor Joel Klein (now a News Corp executive) and Eva Moskowitz, a former New York City councilwoman who now runs charter schools.

Other board members are hedge fund managers Daniel Loeb and Paul Tudor Jones, founders of the Robin Hood Foundation. Once Obama supporters, Loeb and Jones have crossed party lines to help the Republicans defeat him in this year’s election. One of the group’s first actions in New York was to urge people to call for an end to senority-based layoffs for teachers.

From Crooks and Liars:

Dan Loeb – Loeb’s name might not immediately come to mind when thinking of education reform, but that’s because his focus isn’t on the quality of education as much as getting his hands on those pension funds teachers have set aside for their retirement. Loeb also has a personal axe to grind with Randi Weingarten, after she called him out for his work with StudentsFirst’s efforts to convert teachers’ pensions to 401k plans while simultaneously bidding to manage those same funds

StudentsFirst and Michelle Rhee – You may have noticed that the one consistent thread running through the first four Horsemen [Charles & David Koch, Rupert Murdoch & Joel Klein, Walton Family, Dan Loeb] is StudentsFirst. Every one of the Horsemen has either funded or is on the board of that organization. While StudentsFirst is carefully packaged to appear non-partisan and indeed, even liberal in origin, it has one single goal: Kill teachers’ unions by promoting charter schools. Rhee has partnered with the American Federation for Children, a Betsy DeVos project to privatize education and bust teachers’ unions. I include StudentsFirst as a proxy for the other, less obvious corporate interests backing all efforts to break the AFT and other unions, like the US Chamber of Commerce, and hedge fund billionaires. StudentsFirst speaks for them.

“If someone is making money from workers’ capital, they shouldn’t at the same time be trying to destroy the very same plans,” Weingarten told The Post. [Note: Randi Weingarten is president of the American Federation of Teachers (AFT.)]

Loeb is the first investment manager to be targeted through a new campaign spearheaded by the AFT, whose members have a combined $800 billion in retirement funds.

Meanwhile, at least two public-employee funds invested in Loeb’s Third Point are taking steps to pull their cash from his fund.

One, the $12.4 billion Illinois State Board of Investment, wrote an April 12 letter to adviser EnTrust Capital, which invested $31 million of the pension’s cash in Third Point.

“It would be troubling and embarrassing to now find that one of the firms retained by Entrust on [our] behalf is using the fees paid by [our] participants to work against their interests,” wrote Executive Director William Atwood, according to a copy of the letter obtained by The Post. 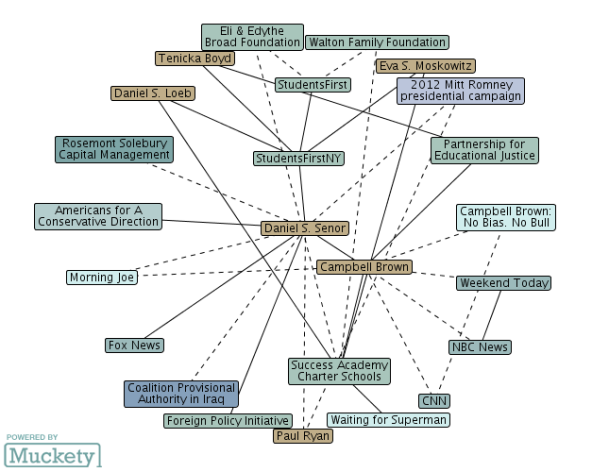 17 Responses to Who the F*ck is Dan Loeb and How Is He Connected to Teacher Pensions and School Reformers?