What’s Going on in Public Education: “A Brief History of the ‘Testocracy,’ Standardized Testing and Test-Defying” 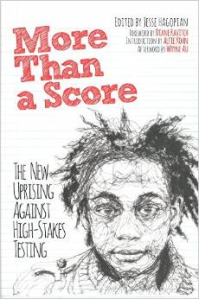 I just came across an excellent article today titled A Brief History of the “Testocracy,” Standardized Testing and Test-Defying that I think is a MUST READ for anyone concerned about the mania for the high-stakes testing of children and the school reformers who are destroying public education in this country. The article is an excerpt from the book More Than a Score: The New Uprising Against High-Stakes Testing (Haymarket Books). The book was edited by Jesse Hagopian. It includes a Foreword by Diane Ravitch, an Introduction by Alfie Kohn, and an Afterword by Wayne Au.

In this excerpt from More Than a Score, Jesse Hagopian explains who the “testocracy” are, what they want – for everybody else’s children and for their own – and why more people than ever before are resisting tests and working collectively to reclaim public education.

Excerpt from the article:

Who are these testocrats who would replace teaching with testing? The testocracy, in my view, does not only refer to the testing conglomerates—most notably the multibillion-dollar Pearson testing and textbook corporation—that directly profit from the sale of standardized exams. The testocracy is also the elite stratum of society that finances and promotes competition and privatization in public education rather than collaboration, critical thinking, and the public good. Not dissimilar to a theocracy, under our current testocracy, a deity—in this case the exalted norm-referenced bubble exam—is officially recognized as the civil ruler of education whose policy is governed by officials that regard test results as divine. The testocratic elite are committed to reducing the intellectual and emotional process of teaching and learning to a single number—a score they subsequently use to sacrifice education on the altar devoted to high-stakes testing by denying students promotion or graduation, firing teachers, converting schools into privatized charters, or closing schools altogether. You’ve heard of this program; the testocracy refers to it as “education reform.”

For too long so-called education reformers, mostly billionaires, politicians, and others with little or no background in teaching, have gotten away with using standardized testing to punish our nation’s youth and educators.

Now, across the country, students are walking out, parents are opting their children out, and teachers are refusing to administer these detrimental exams. In fact, the “reformers” today find themselves facing the largest revolt in US history against high-stakes, standardized testing.

More Than a Score is a collection of essays, poems, speeches, and interviews—accounts of personal courage and trenchant insights—from frontline fighters who are defying the corporate education reformers, often at great personal and professional risk, and fueling a national movement to reclaim and transform public education.

Click on the link to read A Brief History of the “Testocracy,” Standardized Testing and Test-Defying. (Truthout)

Why Are Campbell Brown, David Boies, Robert Gibbs, Hedge Fund Managers, and Other Wealthy Elites Going after Public School Teachers and Their Right to Due Process?, PART I (8/8/14)

Is Campbell Brown the New Michelle Rhee of School Reform? 8/13/14

Who the F*ck is Dan Loeb and How Is He Connected to Teacher Pensions and School Reformers? (8/17/14)

Public Schools for Sale?: Diane Ravitch Talks with Bill Moyers about the Privatization of Public Education (8/21/14)

Should the High Teacher Turnover Rate in Charter Schools Be a Cause for Concern? (11/6/14)

From the ABC’s of Privatizing Public Education: A Is for ALEC, I is for iPad…and P Is for Profits (11/8/14)

Profitship! Cashing In On Public Schools…with a Mark Fiore Video (12/21/14)

3 Responses to What’s Going on in Public Education: “A Brief History of the ‘Testocracy,’ Standardized Testing and Test-Defying”