“You follow the rules for you, not for the enemy. You fight by the rules to keep your humanity. If I ever see or hear of you shooting at a man in a parachute, I will shoot you down myself.”
– Luftwaffe fighter Ace Lt. Gustav Rödel (right), to rookie fighter pilot Franz Stigler before his first combat mission. 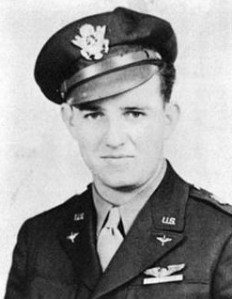 It was December 20, 1943, seventy-one years ago this week.  Rookie American B-17F bomber pilot on his first mission, 2nd Lt. Charlie Brown (left), found himself alone in the skies over Germany, struggling to keep his big four-engine bomber aloft. Only one of the engines was fully functional. The others were either stopped or barely generating power. They had been part of a raid on a German aircraft factory. Of his ten crew members, there were only three who had not been wounded. Brown himself was wounded by shrapnel, and had passed out from hypoxia, regaining consciousness as they got to a lower altitude. The tail gunner, S/Sgt. Hugh Eckenrode, was dead. Charlie Brown’s B-17 was riddled with holes from anti-aircraft fire and bullet holes from an attack by German fighters. Blood was smeared on the outside of the big bomber from badly wounded crew members. With all the damage and partial power from the engines, Brown was unable to maintain airspeed and altitude. All the holes and bent sheet metal created tremendous drag.

As his crippled B-17F lost altitude and airspeed, Charlie Brown dropped out of formation, becoming a straggler. He was a sitting duck for any German fighter who might come up after them. His heart sank when he realized his flight path was taking him directly over a Luftwaffe fighter base. 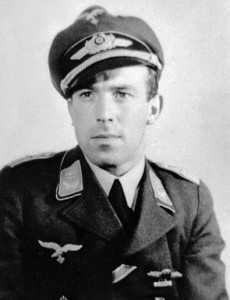 Standing by his Messerschmidt Bf-109 on the ground as it was being fueled and serviced, Oberleutnant Franz Stigler (right), one of Germany’s top aces, saw the B-17F go over. He had already flown combat missions that day, shooting  down two B-17 bombers. One more aerial victory would win him the coveted Knight’s Cross, the highest award a Luftwaffe pilot could earn.  He saluted his crew chief, climbed in the Messerschmidt, and took off in pursuit of the low flying B-17.

Within a few moments, the fast fighter closed in on the tail of the B-17, which had the name Ye Olde Pub painted on the nose.

The Luftwaffe ace was horrified by what he saw lumbering through the air ahead of him. He had never seen an airplane in that condition before, and wondered how it managed to continue flying.

As he pulled in behind the bomber, Franz Stigler could see the tail guns hanging limp. Staff Sgt. Hugh Eckenrode, the tail gunner, was slumped over in his tiny cabin, covered with blood. He also saw the ball turret gunner was unable to shoot at him either. Ball turret gunner Sgt. Sam Blackford was the first crew member of Ye Olde Pub to see Stigler’s Bf-109 closing fast from the rear, but there was nothing he could do but watch imminent death closing in. His guns were frozen.

Stigler pulled in close to the bomber, amazed it was still flying. The entire top half of the rudder was gone. All of the left horizontal stabilizer was missing. There was a huge hole in one wing, and one engine was not turning, the prop feathered. The plane was riddled with holes. Stigler was amazed the plane was even holding together, much less flying. He knew any airplane with that much battle damage would have wounded on board.

A devoutly religious man, Stigler never flew without his rosary beads. By this time, he had worn the finish off the beads.  Stigler could hear Rödel’s words in his mind’s ear: “You follow the rules for you, not for the enemy. You fight by the rules to keep your humanity.”

By this time, the fighter pilot realized the guns on the bomber were silent, so he confidently pulled up alongside the cockpit of the B-17, motioning for them to land. Charlie Brown would not comply with Stigler’s hand signals to land. Stigler realized Brown was too stubborn to land, but also realized he was on the wrong heading to get back to England by the shortest route. Stigler frantically pointed north, trying to get Brown to head to neutral Sweden, where he knew they would get first class medical help and would sit out the rest of the war in the neutral country. Brown plowed on to the west, headed toward England. Stigler flew first on one side and then the other of the crippled bomber. The more he saw of the damage to the bomber, his amazement grew. He flew over a flak battery in close formation with them, knowing the antiaircraft gunners would be unable to fire with the Bf-109 in close formation with the bomber.

Stigler also knew that if his plane was identified and reported, he would be court martialed and probably shot by the Gestapo. His rosary beads got quite a workout that day. As the bomber passed over the coast, Stigler snapped a crisp salute to the wide-eyed Brown and his crew, waved and peeled off for his home field.

When he got back, he told his commander the bomber had gone down in the channel.  Since that was unconfirmed, Stigler did not get credit for ‘shooting down’ a third bomber that December 20.

When Charlie Brown and his crew was debriefed after landing back in England, they were ordered not to tell the story of the chivalrous German pilot. The military brass felt a story about a chivalrous act by a German pilot would not be good for war morale. Unwittingly, that order may have also saved Stigler from the Gestapo, who would have executed him if they found out what he had (not) done.

Charlie Brown went on to fly 29 combat missions with the famed 379th Bomb Group. After completing more than the required 25 missions, he was assigned non-combat status, delivering airplanes, flying cargo, and giving flight instruction. He stayed in the Air Force, finally retiring as a Lt. Colonel in 1972. He also worked for the State Department. After leaving government service, Brown became a businessman, entrepreneur and inventor.

Franz Stigler went on to score several more “kills” after that December 20 encounter, but never again allowed a symbol of an aerial victory to be painted on the tail of his plane. Franz flew 487 combat missions. He was shot down seventeen times and wounded four times. He bailed out six times and rode his damaged aircraft down eleven times. However, he never lost his love of flying. A Bavarian, he had learned to fly at the age of 12 in a glider and soloed in an open cockpit biplane in 1933. He had been a Lufthansa airline pilot when the war started. He was conscripted into the Luftwaffe as an already trained high-time pilot. After the war, he found himself standing in welfare lines. Never a member of the Nazi party, he was able to emigrate to Canada in 1953. He settled in the Vancouver, BC area, becoming a successful businessman.

More than forty years elapsed. Charlie Brown started looking for the man who had spared their lives that day. Finally, in 1990, they found each other. Charlie was convinced he had the right man on the phone when Stigler gave the correct response to Charlie’s question, “What were you pointing at?” Stigler told Brown he was trying to get them to head for Sweden. Both men were amazed to learn they had been living only 200 miles from each other for decades, and their biggest regret was they were now old men who had missed out on decades of comradeship.

Their first meeting since December 20, 1943 was arranged, and film crews were there to record the event for posterity.  The following video clip is of that first meeting in 1990.

Although Franz Stigler had many military decorations as a fighter pilot, his most unique awards came from his former combat enemies.  He was presented with the “Order of the Star of Peace” by the Federation of Combattant Allies En Europe for his act of compassion on December 20, 1943. He is the only Luftwaffe pilot to be so recognized. Franz was also elected to become an honorary member of the 379th Bomb Group Association, attending several reunions as an honored guest.

At one such reunion of old aviators near Boston, both men got to examine a B-17 for the first time in decades. That reunion of men and plane was the subject of a television story:

Here is the official US Army Air Corps photograph of the crew of Ye Olde Pub.

Staff Sergeant Hugh Eckenrode (left) was the only man killed on that mission, and was the first crewman Stigler saw slumped over his guns. He was awarded the Silver Star posthumously in addition to his Purple Heart. S/Sgt. Eckenrode’s remains were returned to the US, and he is buried in the Centerville Memorial Park, Newville, Pennsylvania

In all, this crew was awarded an uncommon number of awards for bravery. Charlie Brown received the Air Force Cross, the highest award the Air Force can give, short of the Medal of Honor.

Franz Stigler died on March 22, 2008 at the age of 92. His obituary lists his immediate family who survived him, and at the end lists, “…special brother Charlie Brown”

Charlie Brown died eight months later, on November 24, 2008 at the age of 86. He is buried in Woodlawn Park Cemetery South, Miami, Florida. 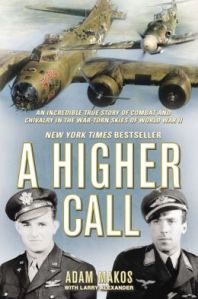 Their story has been memorialized in a book by Adam Makos, in collaboration with co-author Larry Alexander.

A Higher Call: An Incredible True Story of Combat and Chivalry in the War-Torn Skies of World War II is a worthwhile read, and is available both online and in bookstores.

I posted this story a year ago, on the 70th anniversary of the first time these two men met.  That post, on Daily Kos, elicited a number of wonderful comments. All of them were eloquent and heartfelt, but this one stood out to me, personally:

War is horror. And mine will always be a voice for peace. But when war becomes our only recourse, I can only hope warriors such as these are conducting it.
– CanisMaximus

26 Responses to 71 years ago this week, two honorable men met.