Antonin Scalia and the Context of Context [UPDATED] 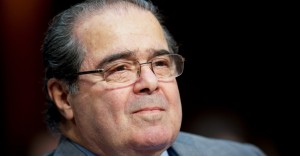 I’ve been reading a lot of Supreme Court cases lately. No big appeal coming up or any federal research to do on any of my cases, I’m just completely  fascinated by Justice Antonin Scalia. The firebrand in the frock is just beside himself  in disagreement with the Court’s 5-4 decision legalizing gay marriage as a fundamental right guaranteed by the 14th Amendment. Assuring us that his outspoken fundamentalist Catholicism has nothing to do with it, just his interest in good government: “[I]t is not of special importance to me what the law says about marriage. It is of overwhelming importance, however, who it is that rules me.” And lest we harbor any misgivings about the true import of allowing mature adults to decide with whom to associate, out textualist minister of selective originalism (kudos Gene) reduces the problem to its essence employing the subtlety of  Ru Paul: “I write separately to call attention to this Court’s threat to American democracy.”  Whew! Glad someone did.

As testy as Nino gets when he sees dire threats to democracy behind every bush (George or otherwise), he was positively apoplectic in the seminal case of the term penning a dissent for the aged. ( That’s the right the “aged”– you know the folks who already have guaranteed health insurance sponsored by the government).  Before launching the screed about the utter lack of judicial reasoning by the majority, Scalia reminds us yet again that the matter is really not all that worthy of his keen intellect:  “You would think the answer would be obvious—so obvious there would hardly be a need for the Supreme Court to hear a case about it.”  But alas, duty called, and our justice from the past felt the need to render this quite obvious dissent from the bench of  the court.

King v. Burwell was the perfect vehicle for Scalia who has become as much concerned with press clippings as precedent.  Slinging red meat was once reserved for  venal politicians looking for votes, Scalia has raised the artform to imbue the hallowed halls of American justice with pithy sound-bites of justice instead of  rock-solid, if boring, legal reasoning.

Take a gander at this judicial “opinion” that could just as surely have come from the otherworldly pen of Lee Atwater (god rest his soulless soul):

“We should start calling this law SCOTUScare … [T]his Court’s two decisions on the Act will surely be remembered through the years … And the cases will publish forever the discouraging truth that the Supreme Court of the United States favors some laws over others, and is prepared to do whatever it takes to uphold and assist its favorites.”

Hey, that’s a good one. It’s not Obamacare; it’s SCOTUScare! Get the push-pollers on the phones!

And why this perversion of law, justice and the American way? Damn fraudulent interpreting of words in their context by Justice Roberts:  devious “jiggery-pokery” of the text, the moralist cries.  Not mere democracy under attack,  mind you, but now our very language is under siege by folks demanding life for 25,000 Americans who died every year before Obamacare was enacted (and thus giving them some chance at healthcare for life-threatening illness). Not that namby pamby Euro stuff like free checkups, cheap prenatal care and universal care at government expense funded by progressive taxation. No, just the right to buy healthcare coverage with some small subsidies provided by the richest Americans. That my dear parishioners … er citizens … is that goblin of the left given to rise from the ashes by that bugaboo — statutory interpretation.

The strict constructionist explains we need not look at the context of words or inartful drafting and compare it to other sections of the law to further the will of Congress (and hence the people they are sworn to protect). Words are words and they mean what they mean, Scalia enjoins us:  “Words no longer have meaning if an Exchange that is not established by a State is ‘established by the State.’” And looking to the interests of the public as the majority cites, is mere “applesauce” to the man who believes every citizen potentially has the right to carry a rocket launcher to his local airport. Here’s our jurist on (where else?) Fox News Sunday:

That was Thursday. Now it’s Monday and things have surely changed around the Scalia household. Now it’s Michigan v. EPA, and our originalist is now writing for a majority of the Court and lambasting the EPA for promulgating regulations against polluters who daily endanger human lives pumping heavy metals into the atmosphere and all because the agency failed to do a study on the costs to the industries of saving our lives. Ok, the agency favored human lives over industry dollars and didn’t do the accounting according to the court.  Why do they have to, you might ask?

Well, you left-wing nincompoop, it’s all in the Clean Air Act, of course. You must take into account the costs of regulations writes our scribe of the majority. Ok, where might we find that language in the text?  Here’s the pertinent statutory scheme according to Nino:

“A source that emits more than 10 tons of a single pollutant or more than 25 tons of a combination of pollutants per year is called a major source. §7412(a)(1). EPA is required to regulate all major sources under the program. §7412(c)(1)–(2). A source whose emissions do not cross the just-mentioned thresholds is called an area source. §7412(a)(2). The Agency is required to regulate an area source under the program if it “presents a threat of adverse effects to human health or the environment . . . warranting regulation.” §7412(c)(3).

If the source qualifies for regulation as the plants in Michigan did (that is threatening human health), the agency must, under certain circumstances, conduct a study  (including the costs) to analyze the impact of the regulations prior to promulgating them:

EPA’s disregard of cost rested on its interpretation of §7412(n)(1)(A), which, to repeat, directs the Agency to regulate power plants if it “finds such regulation is appropriate and necessary.” The Agency accepts that it could have interpreted this provision to mean that cost is relevant to the decision to add power plants to the program. Tr. of Oral Arg. 44. But it chose to read the statute to mean that cost makes no difference to the initial decision to regulate. See 76 Fed. Reg. 24988 (2011) (“We further interpret the term ‘appropriate’ to not allow for the consideration of costs”); 77 Fed. Reg. 9327 (“Cost does not have to be read into the definition of ‘appropriate’”).

“Appropriate and necessary”  are the key words for if the EPA reasonably  concluded that costs were irrelevant because the regulations were both “appropriate and necessary” to protect human health, it could dispense with the study in the public interest. And according to longstanding precedent its interpretation of ambiguous language is entitled to a judicial pass.

Not so fast, said Scalia. “Appropriate and necessary” are not such simple stuff. It’s all about … gasp … the context of the terms:

“One does not need to open up a dictionary in order to realize the capaciousness of this phrase. In particular, “appropriate” is “the classic broad and all-encompassing term that naturally and traditionally includes consideration of all the relevant factors.” 748 F. 3d, at 1266 (opinion of Kavanaugh, J.). Although this term leaves agencies with flexibility, an agency may not “entirely fai[l] to consider an important aspect of the problem” when deciding whether regulation is appropriate. State Farm, supra, at 43. Read naturally in the present context, the phrase “appropriate and necessary” requires at least some attention to cost. One would not say that it is even rational, never mind “appropriate,” to impose billions of dollars in economic costs in return for a few dollars in health or environmental benefits. In addition, “cost” includes more than the expense of complying with regulations; any disadvantage could be termed a cost. “

So statutory  phrases require context and the term “cost” surely means something not found in Websters. But I thought democracy might fail unless we apply only the plain meaning of words devoid of context and thus avoid the evil of judicial lawmaking? Nope, not here, says Nino. Only over there.

Could it depend on which legal ox is being gored? Oh, no that’s too Machiavellian. It’s really very simple. 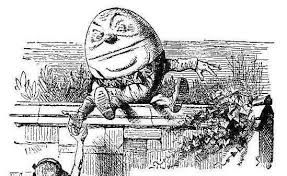 Through the Looking Glass:

Master, indeed. Principles are tricky creatures. Seems they are always showing up, uninvited, just when you think you’ve banished them to the last case. That’s a lesson our modern-day Justice Humpty Dumpty might want to consider before dancing on the next wall.

UPDATE:  A friend of mine reminded me that Scalia has written a book called, A Matter of Interpretation. In that work, he describes the court’s duty in scrutinizing ambiguous statutes is to “to give effect to ‘the intent of the legislature’.” Judges, he adds, are supposed to resolve inconsistencies “in such a fashion as to make the statute, not only internally consistent, but also compatible with previously enacted laws.” And the kicker:

Context is everything…the Constitution tells us not to expect nit-picking detail, and to give words and phrases an expansive rather than narrow interpretation – though not an interpretation that the language will not bear. [p. 37]

I 'm a plaintiff's personal injury attorney with 30 years of trial experience practicing with my law school classmate in Richmond, Virginia. You can read all about me here: www.schillingandesposito.com
View all posts by mespo727272 →
This entry was posted in Constitutional Law, Health Care, Jurisprudence, Politics and tagged Anton Scalia, King v. Burwell, Michigan v. EPA, Obamacare, SCOTUScare, Supreme Court. Bookmark the permalink.

26 Responses to Antonin Scalia and the Context of Context [UPDATED]