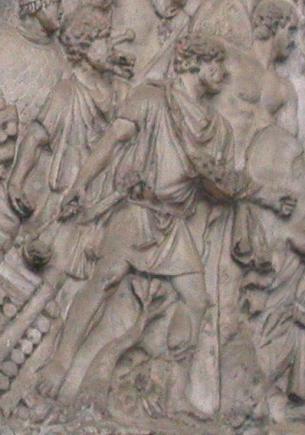 It seems humans have always found ways to terrorize their enemies in addition to killing. Eighteen hundred years ago, one of these was was “whistling” bullets flung with slings.

“Some 1,800 years ago, Roman troops used “whistling” sling bullets as a “terror weapon” against their barbarian foes, according to archaeologists who found the cast lead bullets at a site in Scotland.

Weighing about 1 ounce (30 grams), each of the bullets had been drilled with a 0.2-inch (5 millimeters) hole that the researchers think was designed to give the soaring bullets a sharp buzzing or whistling noise in flight…

These holes converted the bullets into a “terror weapon,” said archaeologist John Reid of the Trimontium Trust, a Scottish historical society directing the first major archaeological investigation in 50 years of the Burnswark Hill site.

“You don’t just have these silent but deadly bullets flying over; you’ve got a sound effect coming off them that would keep the defenders’ heads down,” Reid told Live Science. “Every army likes an edge over its opponents, so this was an ingenious edge on the permutation of sling bullets.” ~ Continue reading