1692 – Giles Corey, aged 81, pressed to death while refusing to enter a guilty or not guilty plea to charges of witchcraft, during the Salem witch trials

1783 – The Montgolfier brothers send live animals up in a hot air balloon, including a sheep and a rooster 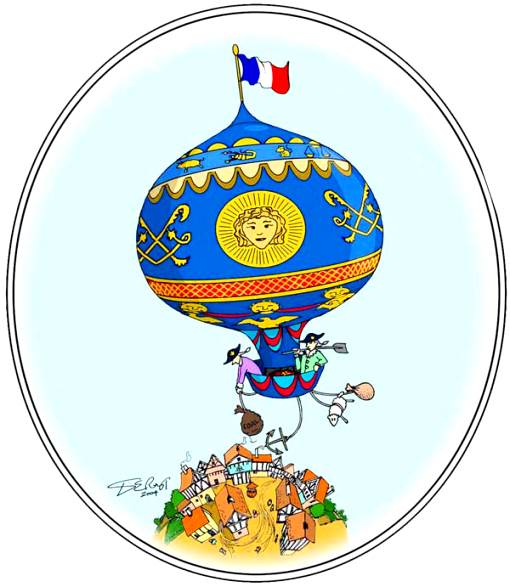 1862 – At the Battle of Iuka in Mississippi, Union troops defeat Confederate forces under General Sterling Price, while he and his second-in-command passed messages back and forth to each other through an aide since they were not on speaking terms. (A member of my family I am not proud of, except that his bullheadedness did help the Northern cause)

1879 – In the UK, the Blackpool Illuminations are switched on for the first time

1946 – Winston Churchill, speaking at University of Zurich in Switzerland, calls for Council of Europe, founded by 1947 Treaty of London signers

1952 – Charlie Chaplin, coming back from a promotion tour of England for his film Limelight, is banned from re-entering the country for his “anti-Americanness” – he only comes back once, in 1972, to receive a Lifetime Achievement Academy Award

1959 – Soviet Premier Nikita Krushchev is told ‘nyet’ – Disneyland, ‘the happiest place on Earth’, will not allow him to visit

1995 – John Bauer and Mark Summers decide on June 6 that what the world needs is Talk Like a Pirate Day * – but June 6 is D-Day, so they choose Mark’s ex-wife’s birthday, September 19, instead, but their friend Brian Rhodes has to keep reminding them about it until 2002 when John chances upon Dave Barry’s email, and they send him their great idea, asking him to be the spokesperson for TLAP day. Dave Barry writes a really funny column (of course) about the idea, and it’s now an international holiday

2010 – On the 25th anniversary of Frank Zappa’s Senate testimony, when he compared labeling explicit records to censorship, a bronze bust of this Baltimore native son is dedicated outside the Southeast Anchor Branch of the Enoch Pratt Free Library, donated to the city of Baltimore by the Lithuanian nonprofit organization ZAPPART

Nona Blyth Cloud has lived and worked in the Los Angeles area for the past 50 years, spending much of that time commuting on the 405 Freeway. After Hollywood failed to appreciate her genius for acting and directing, she began a second career managing non-profits, from which she has retired. Nona has now resumed writing whatever comes into her head, instead of reports and pleas for funding. She lives in a small house overrun by books with her wonderful husband.
View all posts by wordcloud9 →
This entry was posted in History, Holidays, On This Day and tagged Blackpool Illuminations, Born to Be Wild, Cadbury Chocolate, Charlie Chaplin, Frank Zappa, Hong Kong, Montgolfier brothers. Bookmark the permalink.