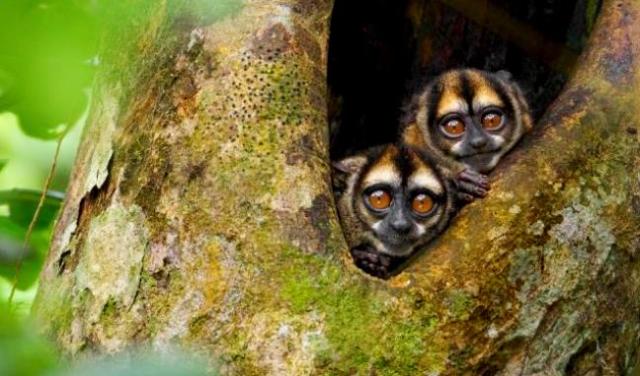 Owl monkeys are tiny South American tree-dwellers that treat every day like it’s Valentine’s Day. A male and a female stick together as long as possible, never cheat, and never “divorce” their mates.  But young adult owl monkeys which can’t find mates —monkeys that scientists have dubbed ‘floaters’ — sometimes pick vicious fights with established pairs, eventually kicking one of them out.

The monkeys forced to take on new partners have fewer babies than owl monkeys that haven’t been broken up, says Eduardo Fernandez-Duque, University of Pennsylvania biological anthropologist who led a study on owl monkey relationships. The results show how monogamy helps owl monkeys—and may shed light on how human relationships evolved, said Fernandez-Duque, who received funding for his work from National Geographic’s Committee for Research and Exploration.

“Call it love, call it friendship, call it marriage—there is something in our biology that leads to this enduring, emotional bond between two individuals that is widespread among human societies,” according to Fernandez-Duque.

Only about 5 percent of mammals are monogamous, and the phenomenon most often arises when both parents are needed to raise offspring, as in the case of humans. With owl monkeys, fathers take on most of the childcare after a baby is born, relying on the mother only for milk.

Floaters — which Fernandez-Duque and colleagues first noticed in 2003 in Argentina’s Chaco region — disturb the pattern. In nearly two decades of observations of 18 owl monkey groups, the team discovered that pairs that stay intact produce 25 percent more babies than monkeys in severed pairs. The exiled animal from those broken relationships, meanwhile, is usually injured and often dies.

Since the team studied more than 150 animals, “I felt very confident that what he was telling us is a real phenomenon—it’s not a flash in the pan,” noted Patricia Wright, author of High Moon Over The Amazon, about her experiences as a pioneer in the study of owl monkeys in the 1980s. She said she was pleased that the Fernandez-Duque study had reinforced findings that owl monkeys stay true to one another unless forced to separate.”I knew that these little monkeys didn’t fool around.”

Why monkeys that are broken up have fewer babies is uncertain, though Fernandez-Duque suspects there’s an emotional component. Just as a man and a woman need time to get to know each other and form a deep connection, so do owl monkeys. The team found that when a marauding monkey enters into a new relationship, there’s a delay in mating—usually about a year.

Pair bonding in monogamous animals, such as owl monkeys, may be “sort of evolutionary antecedent to love in humans,” says Larry Young, behavioral neuroscientist at Emory University and author of The Chemistry Between Us: Love, Sex, and the Science of Attraction.

Evolution has produced our capacity for emotional attachment. That attachment is spurred by oxytocin—created during intimate contact in both people and animals—and dopamine, which is responsible for feelings of exhilaration and happiness.

Whether you call it True Love or Chemistry, the bond between pairs is real, and most of us survive and thrive better with it than without it.

Nona Blyth Cloud has lived and worked in the Los Angeles area for over 50 years, spending much of that time commuting on the 405 Freeway. After Hollywood failed to appreciate her genius for acting and directing, she began a second career managing non-profits, from which she has retired. Nona has now resumed writing whatever comes into her head, instead of reports and pleas for funding. She lives in a small house overrun by books with her wonderful husband.
View all posts by wordcloud9 →
This entry was posted in Anthropology, Biology and tagged Eduardo Fernandez-Duque, Larry Young, Monogamy, NatGeo, Owl Monkeys, Patricia Wright, South America, True Love's Evolution - Monkey Monogamy. Bookmark the permalink.