Trump’s neo-feudal minarchism: voting for the wrong lizard with a $#!+ load of dimes

“That must be Lord Farquaad’s castle… Do you think he’s maybe compensating for something?”

Profane male TV gasbag seems so much more appealing to that ethno-nationalist base than lifelong feminist policy wonk. And then there’s Trump’s Rasputin, mini-mogul Steve Bannon, … the Leni Riefenstahl of the Tea Party movement.

Trumpian politics will be conducted like the Apprentice: Autocrat edition. Crypto-fascist Ethno-nationalist Steve Bannon’s “restoration” is more of a Meiji Restoration although modernization has little to do with 2016’s power shift to an imperious POTUS and it’s a capitalism often fantasized but never realized.

Governor William J. Le Petomane: What the hell is this?

Hedley Lamarr: This is the bill that will convert the state hospital for the insane into the William J. Le Petomane memorial gambling casino for the insane.

Governor William J. Le Petomane: [Standing up proudly] Gentlemen, this bill will be a giant step forward in the treatment of the insane gambler. 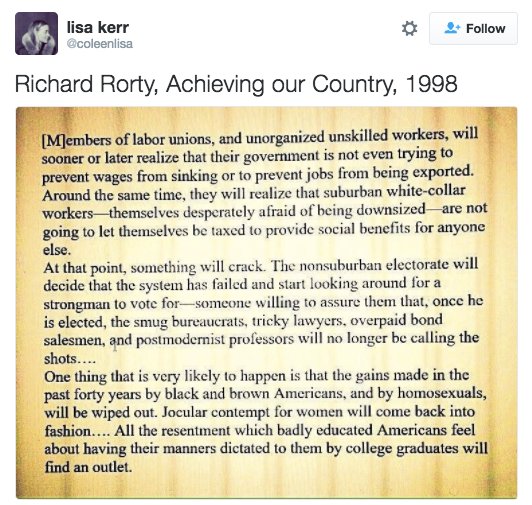 Coverage of the appointment has (rightly) focused on the fact that Bannon ran a far-right website frequented by white supremacists and once, allegedly, told his ex-wife that he didn’t want their children going to school with “whiney” Jews…

In his 2014 remarks, Bannon took a different view. Lamenting the erosion of a “form of capitalism” that adhered to the “spiritual and moral foundations of Christianity,” Bannon decried the “state capitalism” ascendant in China and Russia — and the libertarian capitalism taking over the United States.

The second form of capitalism that I feel is almost as disturbing, is what I call the Ayn Rand or the Objectivist School of libertarian capitalism…that form of capitalism is quite different when you really look at it to what I call the “enlightened capitalism” of the Judeo-Christian West. It is a capitalism that really looks to make people commodities, and to objectify people, and to use them almost — as many of the precepts of Marx — and that is a form of capitalism, particularly to a younger generation [that] they’re really finding quite attractive. And if they don’t see another alternative, it’s going to be an alternative that they gravitate to under this kind of rubric of “personal freedom.”

At times, it can be difficult to discern precisely what part of libertarianism Bannon objects to. He evinces admiration for “entrepreneurial capitalists,” explaining that he only resents the “corporatist” rich, whose wealth derives from rents secured via the government. And his vision of economic utopia — a “harder-nosed” capitalism where the market is truly free from government distortions like the Export–Import Bank — is identical to that of Rand acolytes like the Koch brothers.

But in other moments, he expresses skepticism about libertarianism’s idolatry of the market, and suggests that the economic sphere cannot be separated from the moral one in a truly Christian nation.

So I think the discussion of, should we put a cap on wealth creation and distribution? It’s something that should be at the heart of every Christian that is a capitalist — “What is the purpose of whatever I’m doing with this wealth? What is the purpose of what I’m doing with the ability that God has given us, that divine providence has given us to actually be a creator of jobs and a creator of wealth?”

He further decries the greed and faithlessness of today’s economic elites, explaining that “when capitalism was I believe at its highest flower and spreading its benefits to most of mankind, almost all of those capitalists were strong believers in the Judeo-Christian West.”

His opposition to those elites becomes concrete, in policy terms when he reflects on his own experience as an investment banker at Goldman Sachs. Bannon not only voices disdain for the bailouts, but complains that “not one criminal charge has ever been brought to any bank executive associated with 2008 crisis. And in fact, it gets worse. No bonuses and none of their equity was taken.” What’s more, he appears to endorse some version of Glass-Steagall and the Volcker rule in Dodd–Frank:

I think you really need to go back and make banks do what they do: Commercial banks lend money, and investment banks invest in entrepreneurs and to get away from this trading — you know, the hedge fund securitization, which they’ve all become basically trading operations and securitizations and not put capital back and really grow businesses and to grow the economy.

Wall Street treats Americans as “commodities” — as labor costs, not citizens. In Bannon’s view, the crony capitalists’ callous indifference to the economic stability of “working people” is paired with a similar indifference to their cultural stability, arguing that “there are people in New York that feel closer to people in London and in Berlin than they do to people in Kansas and in Colorado,” and that these elites impose their secular, cosmopolitan values upon the people.

With immigration, the economic, cultural, and (arguably) racist aspects of Bannon’s populist critique converge. This point is well illustrated in an exchange between Bannon and Trump on the former’s radio show last fall, which was highlighted Wednesday morning by the Washington Post:

Last November … Trump said he was concerned that foreign students attending Ivy League schools have to return home because of U.S. immigration laws.

“We have to be careful of that, Steve. You know, we have to keep our talented people in this country,” Trump said.

Bannon was hesitant. “When two-thirds or three-quarters of the CEOs in Silicon Valley are from South Asia or from Asia, I think … “ Bannon said, not finishing the sentence. “A country is more than an economy. We’re a civic society.”

In Bannon’s view, these South Asian CEOs are not bringing valuable human capital to our economy — they are putting downward pressure on American wages and making it possible for corporatists to thrive even as our education system fails to provide the native-born with the skills necessary to compete at the highest levels of the tech industry.

On foreign policy, Bannon has evinced skepticism about NATO, arguing that promises of military protection make a future world war more likely — even as he insists on framing the fight against ISIS as a “global war” between irreconcilable civilizations.

Going forward the Trump needs to be held accountable. With properties and projects around the world there are and will be many opportunities for crony capitalism to sprout within the new administration. It is incumbent upon those of us who believe in free markets and a non-crony economic system to hold the new administration’s feet to the fire. Cutting the federal workforce is excellent. Handing out subsidies to favored businesses would be very very bad.

Trump has an historic opportunity to rise above the crony temptations which are now laid out before him.

“This is not the French Revolution,” says Steve Bannon. “They destroyed the basic institutions of their society and changed their form of government. What Trump represents is a restoration—a restoration of true American capitalism and a revolution against state-sponsored socialism. Elites have taken all the upside for themselves and pushed the downside to the working- and middle-class Americans.”

Liberals can use social media, too. Demagogues fall from favour when their policies fail to bring prosperity. And demographic trends favour pluralism.

FDR provides a working historical precedent for this approach. While his administration did admonish directly against fear itself, it also pulled no punches in channeling the anger of dispossessed Americans toward the plutocrats who opposed him in ways that are strikingly sharp in tone to a modern ear, but find echoes in the language of combative moral authority we typically only see from conservatives today.

Consider FDR’s 1936 Madison Square Garden speech, and how little in common it has with the neoliberal rhetoric of modern Democrats:

We had to struggle with the old enemies of peace—business and financial monopoly, speculation, reckless banking, class antagonism, sectionalism, war profiteering. they had begun to consider the Government of the United States as a mere appendage to their own affairs. We know now that Government by organized money is just as dangerous as Government by organized mob. Never before in all our history have these forces been so united against one candidate as they stand today. They are unanimous in their hate for me—and I welcome their hatred. I should like to have it said of my first Administration that in it the forces of selfishness and of lust for power met their match. I should like to have it said of my second Administration that in it these forces met their master.”

That was a speech designed not for the more rational parts of the brain, but straight for the amygdala, the so-called “lizard brain.” FDR used rhetoric like this in combination with aspirational speeches to build a large and broad coalition that appealed to Americans across the aisle.

Despite forays into airlines, casinos and steaks, Donald Trump’s fortune remains largely tied up in the industry that made his family rich: real estate. A new Forbes investigation into Trump’s wealth pegs his net worth at $3.7 billion, down $800 million from a year ago. Much of that drop — some $475 million — comes from a decline in the estimated value of his properties.

The presidential hopeful lost the most in New York City, home to roughly 53% of his fortune. Cooling markets for retail and office space in Manhattan helped lop about $300 million off the net value of some of his most notable buildings, including Niketown and Trump Tower (which also experienced an estimated 20% decline in net operating income). Plus a slowdown in the city’s luxury residential market hurt the value of high-end properties, such as the two dozen apartments Trump still owns in Trump Park Avenue, a former hotel he converted into condos in 2002, and his personal residence, a three-story penthouse atop Trump Tower.

#MayorOfFairfax caught selling meth for gay sex. #Minarchism, your God is a lie.