All the Orangina Berlusconi’s press corps 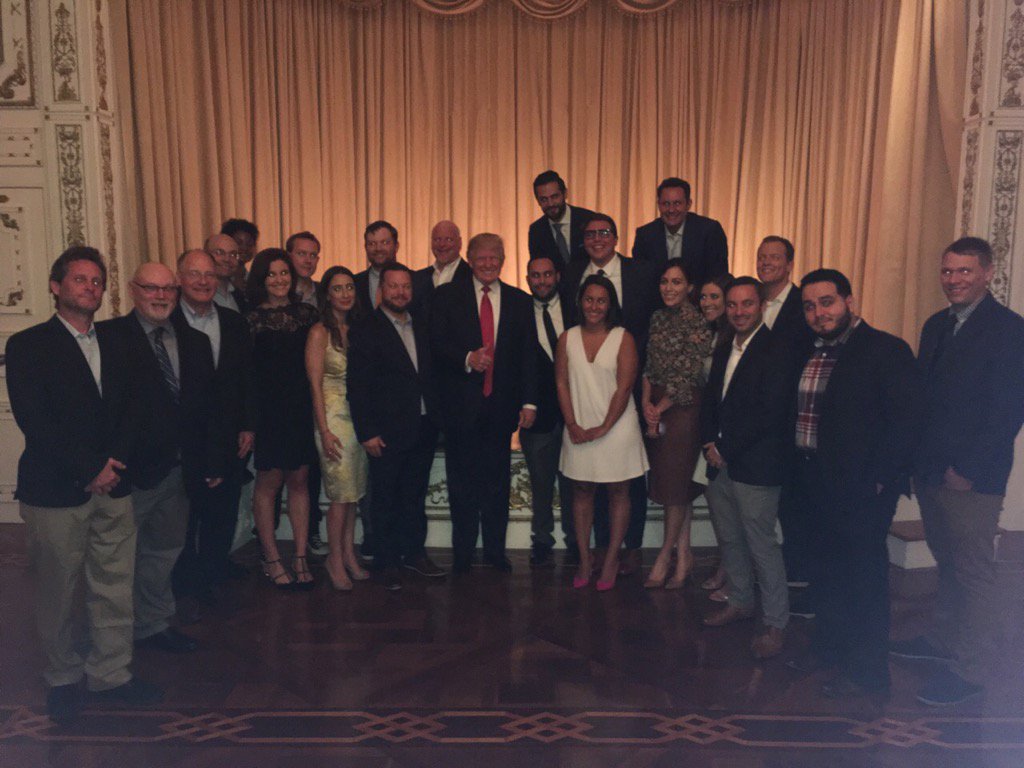 Are these main-stream-media “journalists” blinking-out hostage messages in Morse code while having off-the-record drinks with Orange Gasbag?

All part of the battered spouse syndrome: the more he abuses the press, the more they try to curry favor with him https://t.co/HmcWA5aOUk

So the two guys who gave us “Game Change” the movie, book, dessert topping and floorwax, are now simply “jocular” as their program “With All Due Respect” bit the dust.

As blocked as Mark McKinnon’s LBJ hat, Halperin & Heilemann reached the end of their professional journalism careers to become Beltway game show hosts in their Showtime series “The Circus”.

We now see on the eve of Orange Gasbag’s regime, these Siamese twins playing the role of Steve Wilkos in a bad political imitation of the Jerry Springer show.

Their future as whipping boys for Amber Wighat will come with whatever hagiography emerges soon.

On the other hand we get something we sometimes get with Anthony Bourdain, snarkiness over expensive dinners. Only in the case of HalHeiny, they give us the usual Beltway cynicism derived from enabling the kleptocracy’s ideology du jour, which in this cycle it’s that Dixiecrat revisionism that keeps the less polite terms for ethno-nationalism still in power. Do HalHeiny ever talk to POC, then again privilege must have its voice.

The Circus: Inside the Greatest Political Show on Earth

“The Circus reveals a more human side of the candidates and paints a clear picture of how grueling life can be on the campaign trail, yet the show fails to provide the type of candid analysis and discourse it alludes to during this incredibly unique and cantankerous election cycle.”[4]

Definitely not “Woodstein” as in Woodward & Bernstein. But Mike Bloomberg’s malapropism does give us a peek at how they’re the Bunga-Bunga boys for POTUS-45.

Mike Bloomberg has a fun pet name for the pair of journalists who are the face of his company’s politics coverage, two big spenders whose 5 p.m. weekday show is “entertainment,” he said.

At a town hall on Thursday at Bloomberg LP’s Washington bureau, according to several sources with knowledge of the meeting, the former New York mayor said he refers to Mark Halperin and John Heilemann, who host “With All Due Respect” on Bloomberg TV, as “Haldeman and Ehrlichman.” (Bloomberg has since apologized for his remarks. See update below.)

In a memo to staff Bloomberg Politics staff, Bloomberg apologized for making the Haldeman/Ehrlichman reference, saying it was a “jocular comparison” that was not meant to be disparaging.

For all the tabloid headlines that have dogged Edwards in the years since then, most of the details of the circumstances that led to his fall have remained shrouded in mystery. After his turn as John Kerry’s running mate in 2004, Edwards was among a small handful of politicians with a credible shot at occupying the Oval Office. He was popular and charming, with serious rhetorical skills, a wife beloved by the public, and the same basic profile—a white, southern, moderate male—as the previous three Democrats who’d proved capable of winning the White House. Today, according to a recent NBC News–Wall Street Journal poll, Edwards stands as the “most disappointing” public figure of 2009, having collected twice as many votes for that dubious distinction as Tiger Woods. And hard as it is to imagine, the coming months may debase his image further still.