POTUS45* does shtick for spooks, micturates on memorial

So he brought a cheering section (a claque) and did his campaign shtick for a spy agency that knows far too much about him, how strange this trip has been.

Most presidents know that they should respect such agencies, especially one that trades regularly in “alternative facts”, now that we’re in another strategy of tension (epistemological, even). So little intelligence, tucked back into so few briefings or boxers.

But like he’s never been seen laughing, he never apologizes, even to an agency that probably has actual evidence of his turpitude. And using the wall as a prop … like stacks of steaks and file folders, perhaps a wall too far, even for The Company which ultimately is the people’s company.

John Brennan thought he should be ashamed of himself, but Orange GazBag will be apparently without shame for another 1400 days, or less. 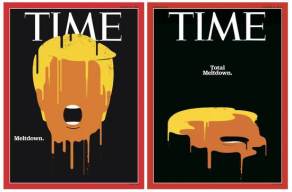 Apparently as proof, the President noted that he had set an “all-time record” in Time magazine cover stories. “Like, if Tom Brady is on the cover, it’s one time, because he won the Super Bowl or something, right?” he told the intelligence officials. “I’ve been on it for fifteen times this year. I don’t think that’s a record that can ever be broken.” Time told Politico’s Playbook that it had published eleven Trump covers—and had done fifty-five cover stories about Richard Nixon.

Trump spoke briefly about eradicating “radical Islamic extremism,” a cornerstone of his foreign policy. But he devoted more than twice as many words to the dispute over the turnout at his Inauguration. “Did everybody like the speech?” Trump asked. “I’ve been given good reviews. But we had a massive field of people. You saw them. Packed. I get up this morning, I turn on one of the networks, and they show an empty field. I say, wait a minute, I made a speech. I looked out, the field was—it looked like a million, million and a half people.”

Crowd scientists who spoke to the Times estimated that about a hundred and sixty thousand people attended, compared with the record-setting 1.8 million who were estimated to have been at President Obama’s first Inauguration. Trump was defiant. “We caught them, and we caught them in a beauty,” he told the C.I.A. crowd. “And I think they’re going to pay a big price.”… 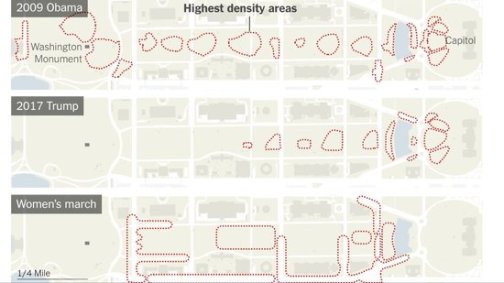 At 7:35 a.m. on Sunday, Trump responded on Twitter to the negative reactions to his comments. “Had a great meeting at CIA Headquarters yesterday, packed house, paid great respect to Wall, long standing ovations, amazing people. WIN!”

But it’s hard to see how America’s new leader will recoup from a performance so shallow, irreverent, and vainglorious.

On Friday evening, the Washington Post reported that the Central Intelligence Agency, in a secret assessment, had concluded that the Russian government sought to tilt last month’s election toward Trump. Trump’s transition team quickly responded with a statement disparaging the C.I.A. “These are the same people that said Saddam Hussein had weapons of mass destruction,” the statement said, adding, “The election ended a long time ago…. It’s now time to move on and ‘Make America Great Again.’ “ In an interview with Fox News’s Chris Wallace which was broadcast on Sunday, Trump expanded on this incendiary statement, saying “nobody knows” whether it was Russian hackers who targeted Democrats and calling the suggestion that the Russians were trying to help him win “ridiculous.”

Just like that, Trump made an enemy of the intelligence community. Many intelligence professionals had already been suspicious of him—because of his disregard for facts, and because of his embrace of the retired Lieutenant General Michael Flynn, the National Security Adviser designate, whom some people in Washington regard as a conspiracy theorist. But this latest episode was something far more direct and personal. Never before has a President or President-elect spoken so dismissively of the C.I.A.

In taking this tack, Trump also invited his political opponents to attack him where his Administration’s grip on power will be weakest: in the U.S. Senate, where the Republicans will have a majority of just two seats. On Sunday, two Republican members of the Senate Armed Services Committee, John McCain and Lindsey Graham—both of whom have, at times, been critical of Trump—issued a joint statement with two Democratic members of the committee, Chuck Schumer and Jack Reed, that said, “Recent reports of Russian interference in our election should alarm every American…. Democrats and Republicans must work together, and across the jurisdictional lines of the Congress, to examine these recent incidents thoroughly and devise comprehensive solutions to deter and defend against further cyberattacks.”

3 Responses to POTUS45* does shtick for spooks, micturates on memorial