Bannonism is not quite the “deconstruction of the administrative state” 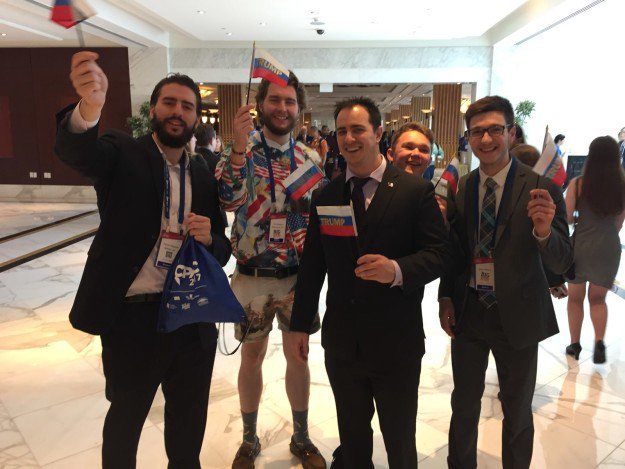 “I have so much power just in my voice. I keep saying the word and they’ll be bankrupt.” POTUS explaining his revenge against news outlets.

CPAC had some actual, unintended Deconstruction unlike Bannon’s riff on nationalist deregulation

Kumbaya in the bunker …Steve Bannon and Reince Priebus appeared in a joint interview at the annual Conservative Political Action Conference (CPAC) outside Washington, D.C. and the former provided a glimpse of the crypto-fascist mentality that informs POTUS45* and his White House.

It was quite unlike the pageant queen’s interview segment where “world peace” was the main goal for a winner or her runner-up.

Lord Dampnut is now clearly a cipher for Bannon’s Fourth Turning / Clash of Civilizations mania and functions as the national CEO in between rounds of golf. POTUS45* is Bannon’s alternative, alt-fact, media factotum, available to cut the ribbon at the launching of any car dealership.

President Bannon’s racist minarchy aims to forward an American version of the “End of Times” in Alexandr Dugin’s Fourth Political Theory. Crony capitalism and kleptocracy will benefit from the chaos and catastrophies that result from implementing those theories.

Bannonism is more about deregulation rather than deconstruction

This is less creative destruction than a misanthropic chaos designed to return the global economy to some infomercialized feudalism. Bannonism’s fatal flaw lies in misunderstanding the political goals of deconstruction and enslaving it to a totalized discourse of racial superiority, resembling some defeated historical models. Since his goal is short-term capitalist profit, Bitcoin is even more of a deconstructive economic program than what Bannon wants to achieve, making his prescriptions in their reified form, crypto-fascist in its goals.

It’s not deconstruction as much as it is appropriating institutions, aided by demolishing (via deregulation) their income-distributional mechanisms for greater class wealth resulting in greater inequality. With undeconstructed profit it’s like starting a riot to disguise a bank robbery. Corporations will survive the deconstruction, so it’s no deconstruction as it is re-centralizing the administrative state for totalitarian control.

More interesting will be the first RW pundit to denounce Bannon as a “Cultural Marxist” precisely because he has adopted a “deconstructive” position on the administrative state that cops a cue from the Frankfurt School.

Lord Dampnut, his junk food, and nuclear trigger are on a perpetual golf vacation punctuated by ceremonial moments celebrated by mass media but with little relevance to the diminution of public policy and in favor of the privatizing the greater good.

But tensions were clear as Dan Schneider, leader of the American Conservative Union, took the stage to denounce the “alt-right”, the rebranding of the far right that has been accused of racism, Islamophobia and neo-Nazism. “There is a sinister organization that is trying to worm its way into our ranks and we must not be duped,” he told the audience.

A short distance away, outside the main hall, the prominent white nationalist Richard Spencer, wearing a general admission badge, told reporters that he “coined the term” alt-right and rejected Schneider’s criticism.

Asked if he feels he now has an ally in the White House, Spencer said: “In terms of Donald Trump, I would say that it’s not so much that he’s alt-right, it’s that he’s a nationalist and a populist and so he’s connected to us on that basic level. He doesn’t articulate our ideas – he’s not an identarian – but his arrow points in our direction.”

STEVE BANNON: And Matt, I want to thank you for finally inviting me to CPAC.

…BANNON: But — but — I think — let’s go back to the point that Reince made for a second. President Trump, when he was running, he made a — and this is the other thing that the — the mainstream media or opposition party never caught is that if you want to see the Trump agenda it’s very simple.

It was all in the speeches. He went around to these rallies, but those speeches had a tremendous amount of content in them, right? I happen to believe, and I think many others do, he’s probably the great public speaker in those large arenas since William Jennings Bryan. This was galvanized.————

Just like they were dead wrong on the chaos of the campaign and just like they were dead wrong in the chaos of the transition, they are absolutely dead wrong about what’s going on today because we have a team that’s just grinding it through on President Donald Trump promised the American people. And the mainstream media better understand something, all of those promises are going to be implemented.

BANNON: I think the — I think the same thing; I think if you look at the lines of work, I kind of break it up into three verticals of three buckets.

So I think — I think the three most important things, I think one of the most pivotal moments in modern American history was his immediate withdraw from TPP. That got us out of a…

… got us out of a trade deal and let our sovereignty come back to ourselves, the people, the mainstream media don’t get this, but we’re already working in consultation with the Hill. People are starting to think through a whole raft of amazing and innovative, bilateral relationships — bilateral trading relationships with people that will reposition America in the world as a — as a fair trading nation and start to bring jobs. High value added, manufacturing jobs, back to the United States of America.

On the — on the national security part, it was certainly the first — I think the first two E.O.s that you start to see implemented here of the last couple of days under General Kelly. And that is, do rule of law is going to exist when you talk about our sovereignty and you talk about immigration. General Kelly…

… and Attorney General Sessions are adamant — you know, that and you’re gonna start to see I think with the defense budget we’re going to talk about next week when we bring the budget out and also with certain things about the plan on ISIS and what General Mattis and these guys think I think you’ll start to see the other part of that.

But the third, this regulation…

BANNON: … every business leader we’ve had in is saying not just taxes, but it is — it is also the regulation. I think the consistent, if you look at these Cabinet appointees, they were selected for a reason and that is the deconstruction, the way the progressive left runs, is if they can’t get it passed, they’re just gonna put in some sort of regulation in — in an agency.

That’s all gonna be deconstructed and I think that that’s why this regulatory thing is so important.

BANNON: You know, I’ve said that there’s a new political order that’s being formed out of this. And it’s still being formed. But if you look at the wide degree of opinions in this room — we have wide and sometimes divergent opinions.

BANNON: But I think we — the center core of what we believe, that we’re a nation with an economy, not an economy just in some global marketplace with open borders, but we are a nation with a culture and a — and a reason for being.

Bannon’s use of “deconstruction” is meant to impress Spencer without the usual punch in the head, when its application in this context is meant simply as negation whereupon smashing the American administrative state would be amusing if that was the actual goal, Leninist or not.

In Bannonism it is more structural in the sense of gaining capitalist value / building wealth which, as crony kleptocracy is more revisionist than radical in objective, hence it is less deconstruction and more demolition in the service of deregulatory profit — for each DeVos and Perry you have Goldman Sachs and Exxon/Mobil.

Something analogous goes for the relationship between deconstruction as theory and method and its particular applications. Deconstruction as theory/method is not left intact by its application to a particular case or issue. Rather, the application rearticulates the theory/method,among other things because it helps us see limitations in the theory or method and develop new theoretical and methodological insights. Nor is the case left intact, because the deconstructive analysis of it shows the undecidabilities and aporias in the discourses under analysis.