If the GOP could only stop being gutless about #RussiaGate …

Unfortunately, those blissfully naive Americans who need to be swayed from their support or even tacit tolerance of Lord Dampnut may need the rhetorical message of a xenophobic CT to get to the discourse space where he must leave office either prematurely or leave political life. Sadly. mitigating his damage has little middle ground. We are in for a bad historical period of repression, an apotheosis of sad RWNJ policy shibboleths.

Imagine if the same kind of attention could be trained and sustained on other issues—like it has been on the Muslim travel ban. It would not get rid of Trump, but it might mitigate the damage he is causing.

Throughout the years Masha Gessen has become one of the go-to Kremlin critics for the U.S. media, publishing harshly anti-Putin reporting and commentary in numerous media outlets, including the New York Times, the Washington Post, Slate, Harper’s and several articles about political repression in Russia for the Intercept. She has also become a virulent critic of Donald Trump, writing shortly after the election that “Trump is the first candidate in memory who ran not for president but for autocrat—and won,” while describing the critical lessons that can be learned on how to resist Trump’s autocratic impulses by studying Putin.

She now has a new article in the New York Review of Books – entitled “Russia: the Conspiracy Trap” – that I cannot recommend highly enough. Its primary purpose is to describe, and warn about, the insane and toxic conspiracy-mongering about Russia that has taken over not the fringe, dark corners of the internet that normally traffic in such delusional tripe, but rather mainstream U.S. media outlets and the Democratic Party. Few articles have illustrated the serious, multi-faceted dangers of what has become this collective mania in the U.S. as well as Gessen’s does…

The Russia narrative dominates national discourse, as it has for months, and becomes progressively more removed from evidence. As Gessen concludes: “What is indisputable is that the protracted national game of connecting the Trump-Putin dots is an exercise in conspiracy thinking. That does not mean there was no conspiracy. And yet, a possible conspiracy is a poor excuse for conspiracy thinking.”

The dream fueling the Russia frenzy is that it will eventually create a dark enough cloud of suspicion around Trump that Congress will find the will and the grounds to impeach him. If that happens, it will have resulted largely from a media campaign orchestrated by members of the intelligence community—setting a dangerous political precedent that will have corrupted the public sphere and promoted paranoia. And that is the best-case outcome. . . .

More likely, the Russia allegations will not bring down Trump.

Until then the strategy of tension will endure when conspiracies will come and go, because “possible conspiracies” are always slippery slopes until the worst has already happened.

The headline here is that we have a president who “knows little about the mechanics of government” and spreads wild conspiracy theories without regard for their veracity.

As Rep. Adam Schiff, the ranking Democrat on the House Intelligence Committee that is investigating Russia’s attempts to influence the 2016 election, put it on Twitter on Monday: “We must accept possibility that @POTUS does not know fact from fiction, right from wrong. That wild claims are not strategic, but worse.” That’s the bad news. The good news, such as it is, is that if Trump looks completely unhinged, he also looks scared.

What is important to consider is how POTUS 45* embodies the class position of supply-side myths which claim that improving ruling class wealth (by minimizing taxes and regulations) has greater redistributive effects than a well-regulated economy. Those beliefs are always rationalizations about the real practices in a modern economy where so much effort is spent on the formal representations: “free market”, perfect competition mystification whilst so much fiddling is done in the actual economy, a melange of formal and informal relations. Instead, Trump gives us the insane hyperbole of the PR flak:

Missed amidst CIA/Russia fervor is the *actual* title for healthcare act: “World’s Greatest Healthcare Plan”. You can’t make this shit up.

The reality is that one doesn’t have to indulge conspiracy thinking to see that there is sufficient evidence of the normal operation of capitalism because a kleptocratic, crony capitalism is a feature, not a bug.

It’s not a conspiracy when one can see it operating openly. That is the crux of a discourse about “hacked’ information that assumed a certain privacy, and was shown to be conniving in order to win elections. All tricks are in fact ‘dirty’ and putting them onto mass media and capitalizing on them can be lucrative yet add no real moral value.

Regardless of today’s releases of CIA information and their sources by entities hostile to the US, Wikileaks has served as useful idiots to remind us how entities less compromised like those in the Panama Papers among other extralegal disclosures reveals the normal operations of international and national capitalism are corrupt simply because of the conventional practices of capital.

Like the informal economy, there is always subaltern commercial activity, what counts is how ‘normalized’ or legitimated it becomes, much like the expectations of bribery and haggling as conventional business practices in various regions and at nearly all levels. What is always disappointing is that at scale one expects greater democracy to feature less corruption and that expectations failure is especially disappointing in the mythology of US capitalism.

In terms of modern marginalism, the best we can expect are a series of poor, often anti-democratic compromises. We don’t really get contemporary vindication for hypotheses about capitalism’s competitive assumptions because there are institutional constraints. Those constraints include legal and political protections for corrupt practices that might be ‘the costs of doing business’. Other constraints include some idealization of agency (“LIVs are white”).

The failure of 2016 was the overwhelming asymmetry of emphasis on such revealed covert actions (media bias), resulting in a ‘surprising’ and somewhat ‘unexpected’ victory and demonstrating the political and economic differences between popular votes and electoral college votes in yet another federal anomaly.

What seems clear from the available evidence and what could be made clearer with even GOP-tainted justice, is that POTUS45* or his minions violated ethical assumptions about how the redistributive efficiency of capitalist markets operate. 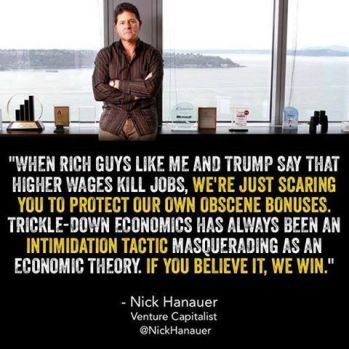 The choice is not between regulation and “freedom”, but how postwar neoliberal deregulation has allowed for the erosion of discourse and hence the rules for political economy. Those who would ‘eliminate regulation’ for whatever quasi-efficiency rationalization are anti-regulatory because of profit, never forget that. Convincing LIVs that lowering taxes are good represent different agendas for different classes.

This is why some would advocate for socialism and perhaps a democratic socialism, knowing full well that all human institutions even those most committed to moral practices, regularly engage in contradictory practices, many of which occupy our activist time and our sense of the public sphere as a rational, regulatory mechanism. Everything we now see we saw in the 2012 election, where the GOP candidate represented the same interests, but with less foolish bombast.