597 BC – Jeconiah, King of Judah, is dethroned and taken into captivity when the Babylonians capture Jerusalem

1190 – At Clifford’s Tower, York, England, 150 local Jews die in a pogrom in the castle keep; most of the Jews commit suicide in order not to fall into the hands of the mob 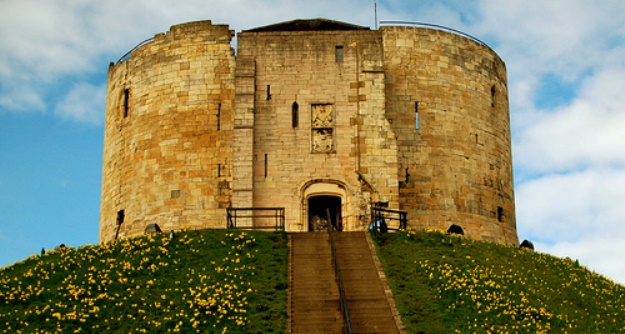 1244 – The Siege of Montségur ends after nine-months; the Château de Montségur is held by Cathars, a Christian splinter movement regarded as heretical by the Roman Catholic Church; when the Cathars surrender to the besieging French royal forces, over 200 of them are burned in a bonfire

1521 – Ferdinand Magellan reaches the island of Homonhon in the Philippines.

1689 – The 23rd Regiment of Foot, or Royal Welch Fusiliers, is founded, one of the oldest regiments in the British army

1787 – George Ohm born, physicist and mathematician ; Ohm’s Law, the physical unit of electrical resistance, is named the Ohm in his honor

1799 – Anna Children Atkins born, English botanist and pioneering photographer; in Photographs of British Algae: Cyanotype Impressions, she records all the specimens of algae found in the British Isles, also created Cyanotypes of British and Foreign Flowering Plants and Ferns – they are the first sustained demonstrations that photography could be scientifically useful

1802 – President Thomas Jefferson signs into law the Military Peace Establishment Act of 1802, in which Congress authorizes funds to build a military academy at West Point NY, and establishes the U.S. Army Corps of Engineers to build it

1822 – Rosa Bonheur born, French painter and sculptor, probably the most well-known and certainly the most financially successful woman painter of the 19th century

1836 – The Republic of Texas approves a constitution

1850 – The Scarlet Letter by Nathaniel Hawthorne, is first published

1871 – The State of Delaware enacts the first fertilizer law

1882 – The Senate approves a treaty allowing the U.S. to join the Red Cross

1935 – Adolf Hitler orders a German rearmament in violation of the Versailles Treaty.

1939 – Germany occupies the rest of Czechoslovakia.

1943 – Ursula Goodenough born, Professor of Biology at Washington University in St. Louis where she engages in research on eukaryotic algae; author of best-selling book  Sacred Depths of Nature, and presenter of her programs Religious Naturalism and Epic of Evolution in venues around the world, including a Mind and Life dialogue with the Dalai Lama in 2002

1947 – Martial law, imposed on March 1st after attacks and bombings which killed at least 20 people, ends in Tel Aviv and parts of Jerusalem

1956 – Saint Urho’s Day * is created by Richard Mattson, a Minnesotan of Finnish descent, as a tongue-in-cheek response to all the to-do about St. Patrick’s Day in the U.S. The “legend” of St. Urho has now been proclaimed in all 50 states, and there are St. Urho pubs in Finland – An alternate version claims that Dr. Sulo Havumaki, of Bemidji State College, is the true originator of the St. Urho legend. This version has Havumaki claiming that St. Urho drove a plague of grasshoppers out of Finland, saving the Finnish wine crop (adding an unlikely warmer climate to Finnish history), and becoming the Patron Saint of Finnish Vineyard Workers.

1968 – U.S. troops in Vietnam under the command of  Lt. William L. Calley destroy a village consisting mostly of women and children, known as the My-Lai massacre

1988 – Indictments are issued for Lt. Colonel Oliver North and Vice Admiral John Poindexter of the National Security Council for their Iran-Contra involvement

1994 – Russia agrees to phase out production of weapons-grade plutonium

2003 – Rachel Corrie, a 23-year-old American woman involved with the International Solidarity Movement, is killed trying to prevent a Palestinian home from being destroyed by a bulldozer in Rafah

2010 – A UCLA study finds 1 in 4 Californians have no health insurance, almost two million more than in 2007, mainly due to job loss

Nona Blyth Cloud has lived and worked in the Los Angeles area for the past 50 years, spending much of that time commuting on the 405 Freeway. After Hollywood failed to appreciate her genius for acting and directing, she began a second career managing non-profits, from which she has retired. Nona has now resumed writing whatever comes into her head, instead of reports and pleas for funding. She lives in a small house overrun by books with her wonderful husband.
View all posts by wordcloud9 →
This entry was posted in History, Holidays, On This Day and tagged Caroline Herschel, James Madison, Maxim Gorky, Nathaniel Hawthorne, Rosa Bonheur, Tallulah Bankhead, Thomas Jefferson, Ursula Goodenough. Bookmark the permalink.