My Theatre Arts teacher in high school told me: “You should know the rules before you break them.” It wasn’t an original thought, but most thoughts aren’t – after all, about 108 billion people have been living and thinking on planet Earth for some 200,000 years, so it’s hard to come up with something new. He also told me: “Steal from the best, then make it your own.”

This last day of Women’s History Month 2017, it seems fitting to highlight a respected Classics scholar and translator who is also a rule-breaker in her own work, which both references and defies poetic traditions and themes – a very tricky thing to pull off.

This is the first Carson poem that caught my eye, because I grew up in Phoenix, Arizona, and the thunderstorms there are “dry and frightening.” The poem of course has nothing to do with Arizona, yet it is an excellent description of the desert storms from my childhood. Note that the ideas jump from Jezebel of the Old Testament Book of Kings to torqued ellipses, which is covering a lot in just eight lines.

A bird flashed by as if mistaken then it

starts. We do not think speed of life.
We do not think why hate Jezebel? We
think who’s that throwing trees against
the house? Jezebel was a Phoenician.
Phoenician thunderstorms are dry and
frightening, they arrive one inside the
other as torqued ellipses.

Carson did an entire series of ‘Short Talk’ poems on a very wide range of subjects. I particularly like this poem. One of the most extraordinary ‘Major things’ in my life happened in 1969 in Greece. While we were watching a performance of Elektra at the theatre at Epidaurus, one of my friends tapped his watch and whispered “they’re landing on the moon,” just as it rose in full glory behind us, and Clytemnenstra screamed off-stage.

Short Talk on Major and Minor

Major things are wind, evil, a good fighting horse,
prepositions, inexhaustible love, the way people
choose their king. Minor things include dirt,
the names of schools of philosophy, mood and
not having a mood, the correct time. There
are more major things than minor things
overall, yet there are more minor things
than I have written here, but it is
disheartening to list them. When I
think of you reading this I do not
want you to be taken captive,
separated by a wire mesh lined with glass
from your life itself, like some Elektra. 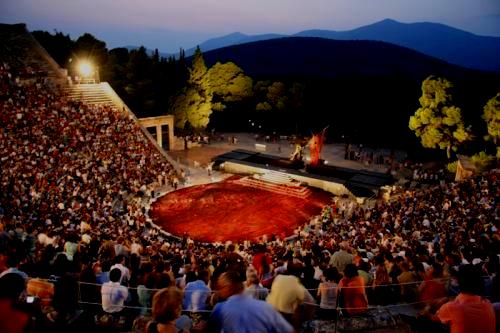 Antigone is a difficult play for modern audiences. It’s hard for us to believe that someone would defy the government and forfeit their life just to put a handful of dirt on a corpse as a symbolic burial, even if the corpse is a much-loved brother. But of course there is much more to the play than that, and Carson has her own views about its deeper meaning.

THE “ODE TO MAN” FROM SOPHOCLES’ ANTIGONE

Many terribly quiet customers exist
but none more terribly quiet than Man:
his footsteps pass so perilously soft
across the sea in marble winter,
up the stiff blue waves and every Tuesday down
he grinds the unastonishable earth
with horse and shatter.

Shatters too the cheeks of birds
and traps them in
his forest headlights,
salty silvers roll into his net, he
weaves it just for that, this terribly quiet
customer. He dooms
animals and mountains technically, by yoke he
makes the bull bend, the
horse to its knees.

And utterance and
thought as clear as
complicated air and moods
that make a city moral, these he taught
himself. The snowy cold
he knows to flee and
every human exigency

crackles as he plugs it in:
every outlet works
butone. Death stays dark.

Hilarious in his high city
you see him cantering
just as he please, the lava
up to here.

Anne Carson has also written novels and essays in verse. The Glass Essay may be autobiographical, or it may a first-person fictional narrative. Since she seldom talks about her private life, I’m not certain. These are the first two “chapters.”

I can hear little clicks inside my dream.
Night drips its silver tap 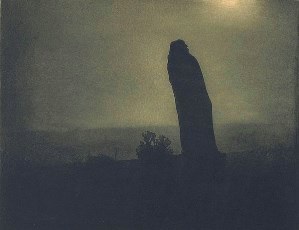 of the man who
left in September.
His name was Law.

My face in the bathroom mirror
has white streaks down it.
I rinse the face and return to bed.
Tomorrow I am going to visit my mother.

She lives on a moor in the north.
She lives alone.
Spring opens like a blade there.
I travel all day on trains and bring a lot of books—

some for my mother, some for me
including The Collected Works Of Emily Brontë.
This is my favourite author.

Also my main fear, which I mean to confront.
Whenever I visit my mother
I feel I am turning into Emily Brontë,

my lonely life around me like a moor,
my ungainly body stumping over the mud flats with a look of transformation
that dies when I come in the kitchen door.
What meat is it, Emily, we need?

Here are two of the poems in her “Town” series.

After your death.
It was windy every day.
Every day.
Opposed us like a wall.
We went.
Shouting sideways at one another.
Along the road. 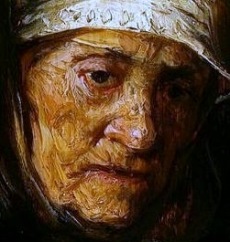 It was useless.
The spaces between us.
Got hard.
They are empty spaces.
And yet they are solid.
And black and grievous.
As gaps between the teeth.
Of an old woman.
You knew years ago.
When she was.
Beautiful the nerves pouring around in her like palace fire.

Town of the Sound of a Twig Breaking

Their faces I thought were knives.
The way they pointed them at me.
And waited.
A hunter is someone who listens.
So hard to his prey it pulls the weapon.
Out of his hand and impales.
Itself. 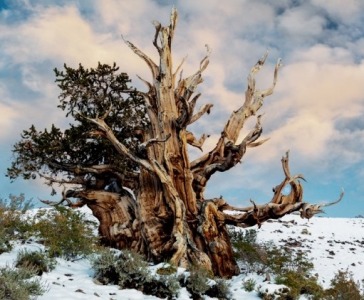 But just when you’re easing yourself into her work, and starting to feel comfortable, Carson throws you a real curve ball. In her 2016 collection Float, she offers six different translations of a 6th century poem by Ibykos. She calls him “a lyric poet known for his love of boys, love of girls, love of adjectives and adverbs as well as a general pessimism . . .”

The first version is a fairly straightforward translation of the original text:

In spring, on the one hand,
the Kydonian apple trees,
being watered by streams of rivers
where the uncut garden of the maidens [is]
and vine blossoms
swelling

beneath shady vine branches
bloom.
On the other hand, for me
Eros lies quiet at no season.
Nay rather,
like a Thracian north wind
ablaze with lightning,
rushing from Aphrodite
accompanied by parching madnesses,
black,
unastonishable,
powerfully,
right up from the bottom of my feet
[it] shakes my whole breathing being.

But by the third version, things have gotten really wild.

Here’s some background on the Brecht and Laughton references:

Bertolt Brecht’s full name was Eugen Bertolt Friedrich Brecht. He left Germany, going into exile without a passport because of his opposition to the Nazis. The FBI had surveillance on him, like many other war refugees, while he was in America.

from Escape to Life: German Intellectuals in New York, edited by Eckart Goebel and Sigrid Weigel:

“In March 1944 Brecht met the actor Charles Laughton. In December they began work on an English version of Leben des Galilei which they finished at the end of July 1945 and substantially revised after the U.S. dropped an atomic bomb on Hiroshima.”

Joseph Losey, who was chosen to be the director of the play, was also being tracked by the FBI – a note in his FBI file reads: “The subject is devoting his efforts towards the production of a play and does not appear to be engaged in subversive activities.”

The play’s try-out in Los Angeles went very well, but Brecht traveled to Washington DC before the New York opening, with a plane ticket for Paris already in his pocket, having been subpoenaed to appear before the House Un-American Activities Committee. The following day, after dodging HUAC’s most dangerous questions, he was on the plane to Paris.

At a cocktail party attended by known Communists, on the one hand,
the subject
being suitably paraphrased as Mr. & Mrs. Bert Brecht,
where ten years of exile have left their mark,
and beneath five copies of file 100-190-707,
Charles Laughton
returning to the stage as Galileo,
enters an elevator.
In the other hand, of my name with a hyphen between Eugene and Friedrich
the Bureau has no record.
Nay, rather,
like the name of a certain Frenchman to whom Charles Laughton might send
. . . . . packages,
accompanied by an unknown woman
who spoke to an unknown man,
or accompanied by an unknown man
who spoke to an unknown woman,
and in the event that all the captions are not correct,
please turn to page 307.

Anne Carson began her study of Classical Greek with a high school Latin teacher, who taught her during school lunch hours. She attended the University of Toronto, though she dropped out twice before earning her BA, MA and PhD in Classics. Carson taught at universities in both America and Canada, including McGill, Princeton and UC Berkeley.

She said in an interview she considers herself a visual, rather than a verbal, artist: “I didn’t write very much at all until I guess my twenties because I drew. I just drew pictures, and sometimes wrote on them when I was young, but mostly I was interested in drawing. I never did think of myself as a writer!” Even after several highly praised books, “I don’t know that I do yet. I know that I have to make things. And it’s a convenient form we have in our culture, the book, in which you can make stuff, but it’s becoming less and less satisfying. And I’ve never felt that it exhausts any idea I’ve had.”

Anne Carson certainly knows the rules – and she also knows how to break them to make something all her own. 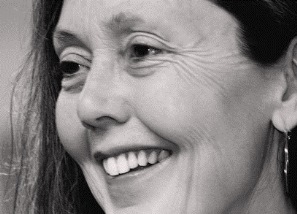 Nona Blyth Cloud has lived and worked in the Los Angeles area for the past 50 years, spending much of that time commuting on the 405 Freeway. After Hollywood failed to appreciate her genius for acting and directing, she began a second career managing non-profits, from which she has retired. Nona has now resumed writing whatever comes into her head, instead of reports and pleas for funding. She lives in a small house overrun by books with her wonderful husband.
View all posts by wordcloud9 →
This entry was posted in Poetry, Word Cloud and tagged Anne Carson, Bertolt Brecht, Elektra, Emily Brontë., Jezebel, Rulebreaker, Sophocles' Antigone, Women's History Month. Bookmark the permalink.
Loading Comments...
%d bloggers like this: