Trouble in a 72-virgin West Wing paradise… considering the onward match of the #TrumpRussia inquiry. What would have been whiz kids in a JFK administration are now becoming voyeurs of the Steele Dossier … say cheese … whiz

Another human shield leaves as the Mike Flynn appointees get purged with the final exit of Ezra Cohen-Watnick, an apparent thorn in the side of H.R. McMaster, National Security Advisor.

The NatSec area has had some bloodletting that represent both the decline of the “Flynnstones” but a hardening that could lead to what now seems a more inevitable military action.

Cutting the Flynn crowd loose may also be important to try to firewall Agent Orange as the grand juries do their work. Perhaps Flynn will become the Dr. Evil of this shaggathon to allow Lord Dampnut to keep his mojo… because loyalty.

Regardless, malevolence will continue until morale improves.

Bannon and Ledeen may be wary of talking about Cohen-Watnick after his first, and thus far only, turn in the national spotlight. Washington got its first real look at Cohen-Watnick when he was identified as one of two White House sources who provided House Intelligence chairman Devin Nunes with evidence that former national security adviser Susan Rice requested the “unmasking” of the names of Trump associates in intelligence documents. In the intelligence world, incidental collection refers to intelligence agencies obtaining, in the course of monitoring foreigners, communications that either refer to or involve Americans, whose names are typically “masked” unless officials request that they be “unmasked.”…

He is in the thick of some of the most important policy fights at the White House; he is viewed as an Iran hawk and has been characterized, for instance, as a main proponent of expanding U.S. efforts against Iran-backed militias in Syria.

The latest move against Bannonites came Wednesday when McMaster fired the NSC’s senior director for intelligence, Ezra Cohen-Watnick. McMaster’s previous attempt to remove Cohen-Watnick from the staff had been blocked by Bannon and Trump himself…

This was not the first change. Last week, McMaster fired Derek Harvey, the NSC’s top Middle East adviser. Harvey was perceived as too close to Bannon by some White House aides, and Secretary of Defense James Mattis had disagreed with Harvey at times.

And another Bannon acolyte, Rich Higgins, was given the boot on July 21, as Rosie Gray at the Atlantic first reported on Wednesday. (This was before the arrival of Kelly as chief of staff.) Higgins, a former Pentagon aide, wrote and circulated a memo charging the “deep state,” “globalists,” and “bankers” with aligning with “Islamists” against the Trump administration.

Meanwhile, Bannon’s allies outside the White House are trying to put the squeeze on McMaster. On Wednesday, radio host Laura Ingraham tweeted a months-old article from the New York Times about McMaster’s “break with the administration on Islam.”

Was it Cohen-Watnick’s loyalty, security clearance, or the connections to others not mentioned … Kushner’s protection, among others not in the McMaster-Bannon line of fire.

When Trump fires Mueller — and he will — the end game begins. 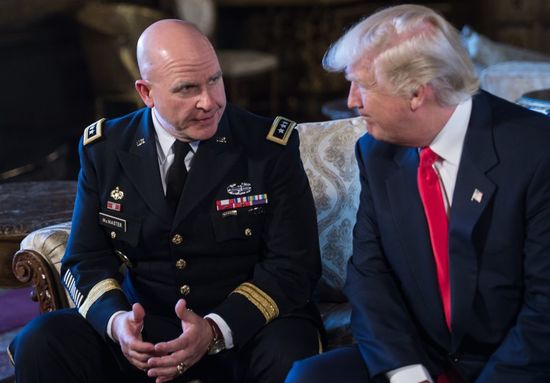 In recent weeks, according to more than half a dozen current and former officials who have had direct interaction with him, McMaster has bristled at White House aides close to Trump whom he perceives as undercutting his authority. He seethes over every national security leak and lashes out over negative news stories he thinks are spread by his enemies. And McMaster, whose temper is legendary, frequently blows his top in high-level meetings.

“He can be very intense,” a McMaster confidant who speaks with him regularly and is a major supporter, told POLITICO Thursday. “Some find that difficult.”There was one person, however, who McMaster couldn’t get rid of: Ezra Cohen-Watnick, the senior director for intelligence programs. McMaster tried to remove him in March, but President Trump, at the urging of Bannon and Jared Kushner, told McMaster that Cohen-Watnick was staying, as first reported by Politico. According to a senior White House official, the two men had a sit-down meeting the following week in which McMaster acknowledged that he hadn’t been able to do what he wanted to do, and that they would keep things as they are and “see how they go for a while.” That was over four months ago.

That Cohen-Watnick, 31 years old and largely unknown before entering the administration, has become unfireable reveals how important he has become to the Trump White House, where loyalty is prized.

McMaster is fiercely at odds with Steve Bannon, the Trump strategist who was removed from the principals committee of the National Security Council in April after McMaster’s appointment. In mid-July, the two sparred openly, in a widely attended policy meeting about Afghanistan, with McMaster advocating greater U.S. involvement and Bannon arguing for a major pullback…

McMaster, several of the officials related, was overruled by Kushner and Bannon when he first sought to fire Cohen-Watnick, and he seethed about his inability to get rid of Cohen-Watnick when an article appeared in The Atlantic last month titled “The Man McMaster Couldn’t Fire.”

McMaster has prevailed in some fierce policy fights — part of a broader battle between Trump administration officials with a more establishment and internationalist worldview, like Mattis and Secretary of State Rex Tillerson — to prevail over the more nationalist vision espoused by Bannon and Trump advisers Stephen Miller and Sebastian Gorka…

“There is a split in the White House between the Bannon camp of ideologues and the McMaster-Mattis-Tillerson camp of more centrist intellectuals,” said Pete Mansoor, a retired Army colonel who worked closely with McMaster and now teaches at Ohio State University. “And this conflict is playing out in real time as the Trump administration tries to flesh out its foreign policy and national security policy.”

McCain: Trump is responsible for U.S. failure in Afghanistan https://t.co/aQ5xFLlrFepic.twitter.com/dQt0hMUqA3

How many Scaramucci units will he last in the position… at least Miller hasn’t declared his undying love for Lord Dampnut… yet.

….You mentioned bringing in elderly relatives, for example, who might not be productive. Yet, in Australia, adult children can sponsor their parents to immigrate. So, which elements of the policy are you choosing that you might…

Right. So, we looked at the Australian system, the Canadian system. We took things we liked. We added things that made sense for America and where we are as a country right now.

One of the things that I think is most compelling about the Australian system is the efforts to make sure that immigrants are financially self-sufficient and make sure they’re able to pay for their own health care and things of that nature. And that’s certainly one of the things we took from that.

And obviously the points-based system that Canada has, has a lot to recommend it, and actually we took that and we added things that were all new to it and they’re released today and that make sure that we have a highly competitive application process. 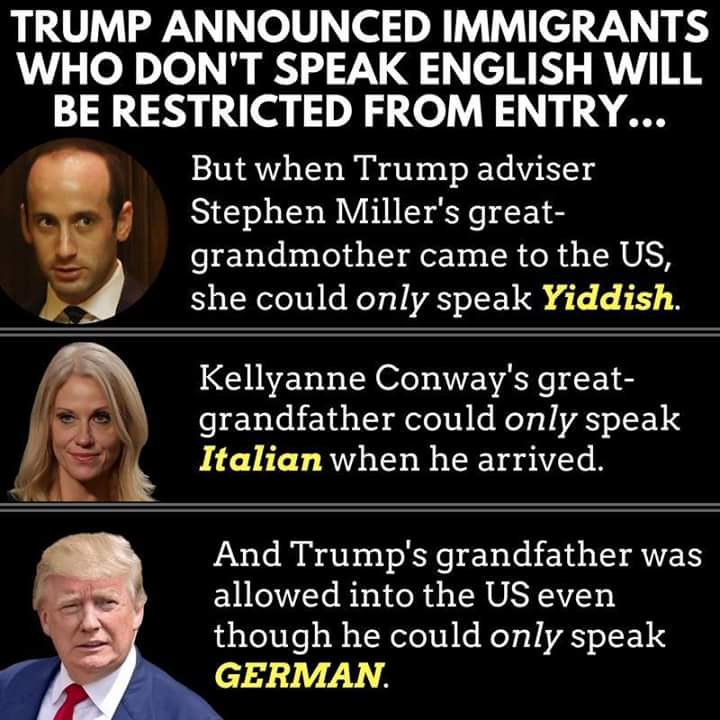 Psychological projection is a theory in psychology in which humans defend themselves against their own unconscious impulses or qualities (both positive and negative) by denying their existence in themselves while attributing them to others.

ACOSTA: — and in other ways do obtain a green card at some point. They do it through a lot of hard work. And, yes, they may learn English as a second language later on in life, but this whole notion of, well, they could learn — they have to learn English before they get to the United States, are we just going to bring in people from Great Britain and Australia?

Jim, actually, I have to honestly say, I am shocked at your statement that you think that only people from Great Britain and Australia would know English.

That you think only people from Great Britain or Australia would speak English is so insulting to millions of hardworking immigrants who do speak English from all over the world.

ACOSTA: Of course there are people who come to this country from other parts of the world.

But that’s not what you said. And it shows your cosmopolitan bias.

And I just want to say–

ACOSTA: (OFF-MIKE) sounds like you’re trying to engineer the racial and ethnic flow of people into this country through this policy.

“Cosmopolitanism” became a rhetorical weapon used by nationalists against “alien” ideas that went counter to orthodoxy. European Jews were frequently accused of being “rootless cosmopolitans.”[34] Joseph Stalin in a 1946 Moscow speech attacked writings in which “the positive Soviet hero is derided and inferior before all things foreign and cosmopolitanism that we all fought against from the time of Lenin, characteristic of the political leftovers, is many times applauded.”[35]

In the 21st century the epithet became a weapon used by Vladimir Putin in Russia, and by nationalists in Hungary and Poland.[36]

and then they wheeled out the fertility goddess … again

Lara Trump thinks you havenÃ¢ÂÂt heard about the presidentÃ¢ÂÂs accomplishments because there is “so much fake news” https://t.co/05vwtoiGfI

TrumpÃ¢ÂÂs continued attacks on Clinton tell us why the Democrats lost – by Von Drehle https://t.co/sCd6SYLqiC

5+ days since Putin kicks out 755 US Embassy personnel. No response from Trump–not one word! https://t.co/RPzWnqM1JF

This is his 45th day at a golf course, 60th day at a Trump property as POTUS.

7. In Reality it’s a confirmed Russian propaganda Bot retasked by a human team that monitors @amjoyshow & @billmaher show & others pic.twitter.com/Kg3mBjGl8k