So the president’s own advisers are saying to discount his words, is where we are now https://t.co/PBdiHaQ6sT

Gaining Weight, Being Lonely, and Getting Angry … How diminished are Trump’s capacities? He’s getting more Nixonian, regardless of the final days.

Trump’s already demonstrated his lack of fitness, and a plethora of enabler narratives have emerged ranging from generals standing watch to Congress trying to put war powers safeguards in even as AUMF authorizations remain historically ambiguous.

He now has already had numerous people killed as a result of military actions not unlike his predecessors, but there are high crimes and misdemeanors yet to be discovered as #TrumpRussia continues.

The possibility of war crimes made its appearance recently as a Trump summer break stunt (fire, fury, and frankly power). This raises the interesting prosecution of crimes other than his current obstructions of justice and the possibility of financial crimes among others.

Will Trump be absolved of heinous crimes before/after separation from the office of POTUS. If he’s unhinged, are his capacities diminished.

We don’t have a real sense of Trump addictions unless they’re drugs or sex (he has been described as a “beast” at sex parties, some with underage girls, and the claim has been that he never used drugs at such parties). He claims that he doesn’t drink alcohol.

So will there be a junk-food defense for launching military action with WMDs, considering how much is consumed by Agent Orange.

Even as junk-food was not causal but symptomatic of Dan White’s depression, in Trump’s case, he claims to have never had psychotherapy, yet so many in the media have tried to professionally assess his unhinged behavior.

This recent threat and counter threat by the DPRK against Guam is par for the course with Trump, threatening action and giving the impression he and/or his staff doesn’t know what he’s talking about.

Junk food was used as evidence that White was depressed; White’s depression was used to establish grounds for a successful diminished capacity plea; and therefore White was judged incapable of the premeditation required for a murder conviction… 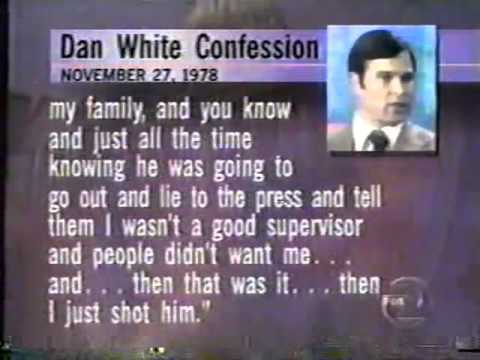 Better to believe the jury was hoodwinked by some pseudo-scientific nonsense about junk food than to acknowledge the fact that our legal system sometimes absolves defendants of responsibility for the most heinous of crimes.This isn’t to say that the public didn’t have a right to be outraged. Even though White had entered City Hall carrying a gun loaded with especially lethal ammunition, climbed through a basement window to avoid metal detectors, evaded Mayor Moscone’s bodyguard, reloaded after killing Moscone, and walked across City Hall to find and gun down Harvey Milk, the jury found that White’s actions were not premeditated. In that outrage, the public changed what they had heard into something they wanted to believe they had heard.

That a jury could rationally have found that White’s actions were not premeditated was incomprehensible and unbelievable to most people, so instead the facts were converted into a story about how a slick lawyer got White off with an absurd “Twinkie defense.” 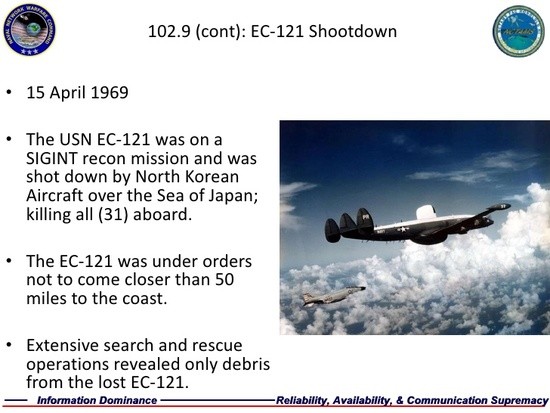 But in April 1969, mere months into the first Nixon Administration, Nixon’s internationalist savvy was still unproven. That’s when North Korea shot down an EC-121 spy plane over the Sea of Japan. Nixon was furious. 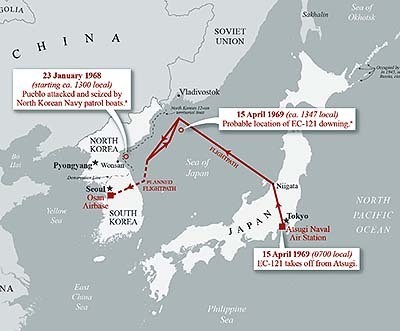 A July 2010 story on NPR featured remarks from Bruce Charles, an Air Force pilot based in Kunsan, South Korea at the time. He recalled being put on alert to carry out his part of the SIOP, the Single Integrated Operational Plan – the U.S. nuclear strike plan for war with the Communists.

The 1969 EC-121 shootdown incident occurred on April 15, 1969[Note 1] when a United States NavyLockheed EC-121M Warning Star of Fleet Air Reconnaissance Squadron One (VQ-1) on a reconnaissance mission was shot down by North Korean MiG-21 aircraft over the Sea of Japan. The plane crashed 90 nautical miles (167 km) off the North Korean coast and all 31 Americans (30 sailors and 1 Marine) on board were killed, which constitutes the largest single loss of U.S. aircrew during the Cold War era.[1]

Charles was put on alert to drop a 330-kiloton nuke on a North Korean airstrip.

Eventually, the order to stand down was given, and Charles returned to his regular duties. According to the official accounts, Nixon and his advisors mulled over how to respond. In the end, the President opted not to retaliate.

It’s worth speculating that Nixon would have wanted the Communists to believe he actually considered a nuclear strike. In the coming years, the President would even send nuclear-armed bombers toward the Soviet Union while spreading the rumor that he was so insane, he might really trigger World War III.

Of course, he wasn’t insane. And thanks to a 2000 book by Anthony Summers and Robbyn Swan, we know he was just drunk. Not with power, but with booze…

According to Summers and Swan’s book “The Arrogance Of Power: The Secret World Of Richard Nixon,” Kissinger is reported to have told aides on multiple occasions that if the President had his way, there would have been a new nuclear war every week.

For those of you not keeping score at home, there are 160,000 people on Guam, which is American territory. This is the response to Trump: https://t.co/9mVp0TI8eq

Thou shalt not kill?

To launch a nuclear strike, Donald Trump would follow these steps https://t.co/2Wh0gMAl1X pic.twitter.com/TgbUFmKQpS

Perhaps Mr Trump believes that no hyperbolic threats should go unmatched or that apocalyptic warnings are the only ones the North Korean leadership will understand. Perhaps he – intentionally or not – is pursuing a Nixonian “madman” style foreign policy, where adversaries will tread lightly to avoid triggering the wrath of an unpredictable US commander-in-chief.

When the leader of the world’s greatest superpower, the only nation ever to have used nuclear weapons on an enemy, talks of unprecedented “fire and fury”, however, those words have consequences.

During his presidential campaign Mr Trump criticised his predecessor Barack Obama for not enforcing a red line against Syria’s use of chemical weapons. Now President Trump has drawn a fiery bright line of his own with North Korea – one that could commit the US to a perilous course of action if his words go unheeded.

Yeah, foundational game theory says: in a face off between two morons, we all die, especially if we’re in Guam. https://t.co/6goL4Qp7Vk

Despite the rhetoric from Donald Trump and Kim Jong Un, analysts say there are no signs of a preemptive strike https://t.co/MEFJNYW2IH pic.twitter.com/mPzf1UG84y

As a country, we should at least be able to agree that the word “improvised” should never be applicable to warnings in a nuclear standoff. https://t.co/l5tvu3vPEH