Trump trapped by his own prevarications 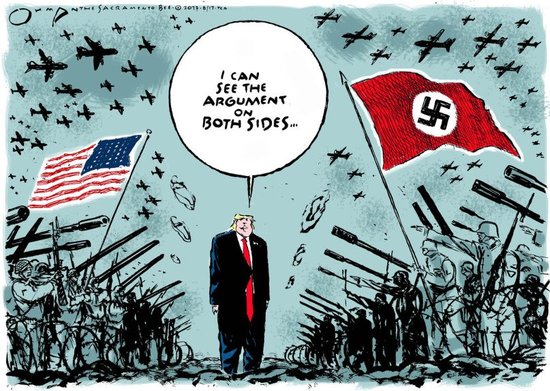 The protests against those protesting Confederate statuary removal are justified to eradicate the “… systematic propaganda campaign to advance the racial cause of the Confederacy”, despite Trump’s apparent and continued sympathy for it using false equivalence.

Perhaps Trump got confused as he does because supporting “heritage” of lost-cause neoconfederates really cannot be easily segregated(sic) from the “heritage” of white supremacist neo-Nazis. It’s that Drumpf Denier/Birther thing, perhaps.

Trump cannot identify the “many sides” of the argument, which regardless, was about subjugation of labor and subjugation of races regardless of historical period. Trump’s OK with both, at least in private conversation, as we’ve discovered from inside WH sources. We knew this from him and his father’s real estate history.

Thus these “both sides” together constitute a single side that cannot ever be sustained by a US president… mainly because of WWII, but it is about the Union’s Constitution and perhaps the failure of US Reconstruction(s).

We are as Reverend Barber has said, on to a Third Reconstruction. Sadly, it must be fulfilled in 2017 as a response to the worst forms of bigotry at the highest levels.

This was the pivot—Trump finally rid himself of any remnant reverie that he would at some intangible moment in time turn toward an embrace of his better angels. Trump’s intemperate defense of murderous ideologies left no doubt that any lingering hints of grace have long since left his being. That became undeniable at Trump Tower as he took up the cause of a pure and known evil that, both here and abroad, has taken millions of innocent lives in the name of supremacy.

Icons serve a didactic purpose, and the US confederacy monuments to failed treason serve to historicize both their failure and their claims against the victor. This explains the Confederate memorialization during Jim Crow as a measure of local-state hegemony. Restriping the lane lines.

It is about the necessary site-specificity for historical events memorialized, not generic monuments meant more as ideological billboards selling abstractions. That is the “battle-flag” problem itself in terms of historical meaning and use, as if the South’s “lost cause” was ever not racist.

Given the connection some Confederate fetishists have for the white supremacy message they feel allows them to parade with or as Nazis/neo-Nazis, they should understand the need as Germans do, to place such historical negatives in proper places or perhaps even no places at all. Permits be damned.

OTOH, Donald John Trump celebrating German draft-dodging pimps of the preceding centuries might have some interesting costumes to parade, because heritage. Even with a German-American Bund, reviving it as a historical cosplay reenactment might have little interest, even in the upper Midwest. Because why, Mr. Trump? It was explicitly antisemitic, even in its US form.

This is why you, Mr. Trump, can’t be so stupid in your public comments even if you reveal what you really think in private, as now so many are willing to share. Nazis with permits are still Nazis. And we Americans are the anti-fascists, regardless of our ages. Some living history is better left dead. 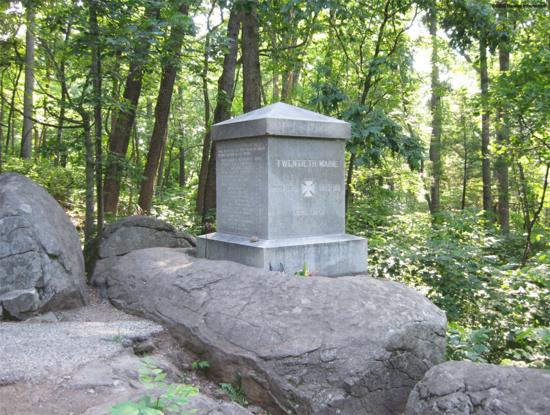 The Gettysburg National Military Park, which memorializes soldiers who fought and died during the Battle of Gettysburg, including men who served in the Confederate Army of Northern Virginia, has not received any complaints or requests related to the monuments, said Katie Lawhon, park spokeswoman.

“These memorials, erected predominantly in the early and mid-20th century, are an important part of the cultural landscape,” Lawhon said in an email.

More than 1,325 monuments, markers and plaques reflect how the 1863 clash has been remembered by different generations of Americans.

The National Park Service is committed to safeguarding the site-specific monuments in perpetuity, she added.

But the conversation around the monuments’ removal is missing crucial context around how they got there in the first place. Most Confederate monuments were constructed at the dawn of the Jim Crow era, decades after the Civil War, with a second uptick in the 1960s in response to the civil rights movement. Like the popularity of the Confederate battle flag, their construction neatly aligns with backlash against racial progress. talkpoverty.org/…

Icons primarily serve a didactic purpose: they are pictorial texts for the illiterate.

Architecture was considered to be one of the first didactics. Churches were a physical construction that disseminated religious knowledge through their light, structure and design. The shape of the church-a cross- not only holds obvious symbolism but the long nave also directs people through the space and allows for many rows of pews. Numbers in the church also hold explicit references to the bible. For example, twelve columns would allude to the twelve apostles, three to the trinity, and four to the archangels. Even the stained glass windows of the church illustrate biblical stories. The building serves as a medium to instruct churchgoers about their own faith. arch100and110.blogspot.com/…

Kirk Savage: The big boom in Confederate monument building was roughly between 1890 and 1920, and then there was a secondary boom in Confederate commemoration that was in reaction to the civil rights movement in the ’50s and ’60s. In both these cases, there were political reasons why those monuments were erected when they were.

The first boom took place during the consolidation of Jim Crow and racial segregation in the South, the final defeat of the ideals of reconstruction and racial equality in the South.

The second boom took place when that Jim Crow era came under threat from the civil rights movement.

Now, I should say that in the North, there was a less marked but similar lag in monument construction, simply because the veterans of that war were dying off.

But what really distinguished the white Southern commemoration of the lost cause was the systematic campaign to build monuments, rewrite textbooks, and put Confederate flags and symbols in public schools.

This was happening in the late 19th and early 20th centuries, a systematic propaganda campaign to advance the racial cause of the Confederacy.

“Public monuments were meant to yield resolution and consensus … but the process of commemoration often leads to conflict, not closure, because in defining the past we define our present.”

If they want to waste philanthropic money, not unlike the regulation of adult entertainment there should be zonal places for such “free speech” and the relocation of physical monuments especially non-site-specific ones, much like the zones set up at political conventions. Because freedom.

The objective of todays ahistorical RW discourse is to resist iconoclasm, and ensure the viability of RW discourse in the public sphere, despite sedition and treason. Because freedom.

But with better knowledge resources, to ensure democracy, there emerges the necessity to reposition or remove such icons designed to ensure local hegemony or the suppression of counter-hegemony in everyday life. Because freedom.

So it’s not a thought police thing to minimize the anachronistic Lost Cause historical revisionism of heritage as a proxy for regional slave-ownership economies. But each in its own place, because matters of legal standing. And despite owners of model agencies seen as human traffickers, slavery still exists and nothing should glorify any of its past. 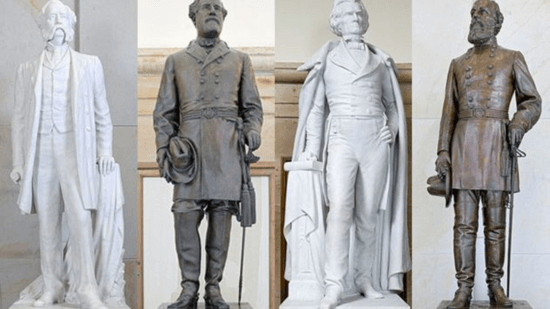 There is a Museum of the Confederacy … put them all there. If you want your Nazi fix, read a book, rather than burning one. Museums are still mausoleums, regardless.

More of us probably want taco trucks on every corner than anti-democratic totems.

Capitol confederate statuary should go to the Museum of the Confederacy…

Or give them to these folks…

(2016) This Museum Isn’t Confederate Enough for These Losers

Museum of the Confederacy in Richmond VA

The venerable Museum of the Confederacy has gotten too PC for some die-hard partisans, so the Sons of Confederate Veterans are starting their own museum.

In the spirit of the popular rallying cry, “The South Will Rise Again,” the Sons of Confederate Veterans (SCV) recently announced that they would spend $5 million on a 17,000 square-foot museum to be built in Elm Springs, Tennessee, the location of their national headquarters.

The announcement comes amidst the most sustained assault on Confederate iconography, including monuments and battle flags as well as the grand opening of the National Museum of African American History and Culture in Washington, D.C. “At the completion of this museum,” according to Lieut. Commander Paul Gramling, “it will be out of the reach of the long arm of political correctness. This will be ours.”

The SCV failed to point out, however, that there is already a museum devoted to the Confederacy located in its former capital of Richmond, Virginia. It is also a museum that many SCV members now largely reject as having distorted the history of the Confederacy and the South and betrayed the men and women who sacrificed in its name.

Trump couldn’t even bring himself to condemn the racists today in Boston, rather simply making another generic statement about “protesters”, even as the protesters were out numbered by counter-protesters at 500 to 1.

I want to applaud the many protestors in Boston who are speaking out against bigotry and hate. Our country will soon come together as one!

Our great country has been divided for decades. Sometimes you need protest in order to heal, & we will heal, & be stronger than ever before!