285 or 286 (traditional) – Saints Crispin and Crispinian, believed to be twin brothers, in a possibly apocryphal story, preach Christianity by day to the Gauls and make shoes at night to earn a living and raise alms for the poor. Their success causes Rictus Varus, governor of Belgic Gaul, to have them arrested, tortured and thrown into the river with millstones around their necks – when they survive this treatment, he has them beheaded – Patron saints of  leather workers and shoe makers, their Saints Day is famously mentioned in Shakespeare’s Henry V, Act IV, scene 3 – see next entry

1760 – British King George II dies; his grandson becomes King George III, who will rule for 59 years, suffering months-long bouts of violent insanity in 1778 and 1804, finally sinking in 1810 completely into madness for his last ten years, while also blind and deaf

1825 – Johann Strauss II, Austrian composer of over 500 waltzes and other types of dance music, including “The Blue Danube” and “Tales from the Vienna Woods,” as well as the operetta Die Fledermaus (The Bat)

1840 – Helen Blanchard born, American inventor who received 28 patents, including the Blanchard over-seaming machine (which both sewed and trimmed knitted fabrics), zigzag stitching, a pencil sharpener, and a machine to sew hats

1854 – Charge of the Light Brigade – during the Crimean War, the French and British were winning the Battle of Balaclava when Lord James Cardigan received a vague and confusing order to attack the Russians, which was further muddled when passed on by his aide-de-camp to Lord Lucan, whose troops charged straight into the Russian battery guarding the Russian cavalry in the North Valley and suffered 40 percent casualties. This military disaster was given a heroic spin by Alfred, Lord Tennyson, in his poem The Charge of the Light Brigade

Charge of the Light Brigade –painting by John Bampfield (1947)

1870 – The first U.S. trademark is given to the Averill Chemical Paint Company of NY

1881 – Pablo Picasso, artist considered by many the most influential of the 20th century, is born in Malaga, Spain 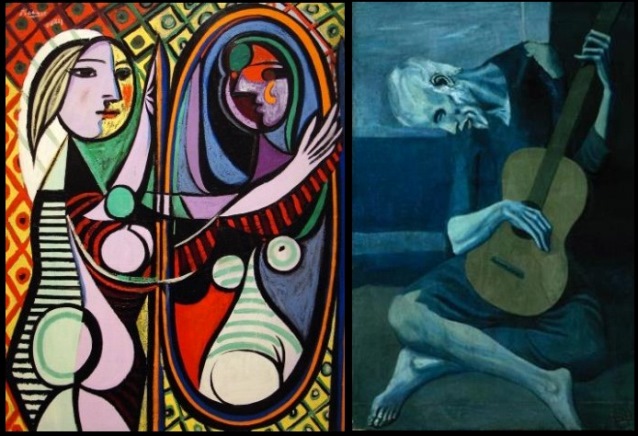 Girl Before a Mirror, and The Old Guitarist – both by Pablo Picasso

1882 – Tony Jackson born, American pianist, singer and composer; composed the music for the song “Pretty Baby” among many others, but he often sold his songs, rights and all, for a few dollars, so many of them are attributed to others

1892 – Margaret Ingels born, American mechanical engineer; first female graduate in engineering at the University of Kentucky in 1916; worked on air conditioning, developing an “effective temperature” scale which incorporated humidity and air movement in the equation for comfort level

1900 – The United Kingdom annexes the Transvaal

1902 – Henry Steele Commager born, American historian and liberal activist; campaigned against McCarthyism and against the Vietnam War; author of a biography of Theodore Parker, and The American Mind: An Interpretation of American Thought and Character since the 1880s

1912 – Minnie Pearl, born as Sarah Coley, American comedian who appeared at the Grand Ole Opry from 1940 to 1991; after battling breast cancer, she became a spokeswoman and benefactor for cancer research, founding the Minnie Pearl Cancer Foundation, and the Sarah Cannon (her married name) Cancer Research Institute

1917 – The Bolsheviks, under Vladimir Ilyich Lenin, seize power in Russia

1923 – Beate Sirota Gordon born in Austria; her family emigrated to Japan in 1929, where her father was a professor at the Imperial Academy of Music; she came to America in 1939 as a student at Mills College in California, and completely cut off from her family during WWII. In 1940 she was one of only 65 Caucasians fluent in Japanese in the U.S., and worked for the Foreign Broadcast Information Service of the FCC; becoming an American citizen in 1945. In December, 1945, she was the first civilian American woman to arrive in Japan, working for the Political Affairs staff, and reunited with her parents, who survived the war in an internment camp. She worked for the Supreme Commander for the Allied Powers (SCAP) as a translator – in addition to Japanese, she was fluent in English, German, French, and Russian – and worked on the civil rights section of the new constitution for Japan, drafting the language on legal equality for Japanese women; one of only two women involved in this work – the other was economist Eleanor Hadley. After the war, she was a career counselor for Japanese students in New York City, including Yoko Ono, and then became an impresario, introducing Japanese performing artists to the NY public 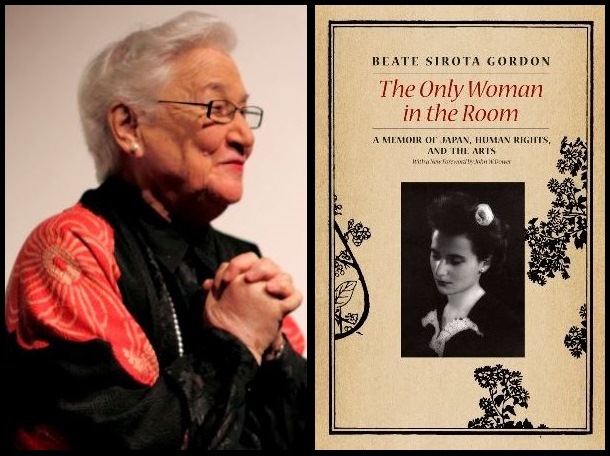 1938 – The Archbishop of Dubuque, Francis J. L. Beckman, denounces swing music as “a degenerated musical system … turned loose to gnaw away at the moral fiber of young people”, warning that it leads down a “primrose path to hell.”

1939 –William Saroyan’s play, The Time of Your Life, opens on Broadway

1941 – Anne Tyler born, American novelist; notable for The Accidental Tourist, and
Breathing Lessons, which won the 1989 Pulitzer Prize for Literature

1944 – Heinrich Himmler orders a crackdown on the Edelweiss Pirates, a loosely organized group of mostly 14 to 17 year olds who rebelled against the Hitler Youth regimentation of Nazi Germany, and sometimes assisted army deserters and others to hide from the Third Reich. By November, thirteen of their leaders had been rounded up, and then publically hanged in Cologne

1945 – Formosa Island, now called Taiwan, is ceded by Japan under the terms of the Potsdam Treaty back to the Chinese people, now marked as Retrocession Day *

1954 – U.S. cabinet meeting is televised for the first time

1958 – U.S. Marines withdraw from Beirut, Lebanon, after being sent in July to protect the nation’s pro-Western government

1960 – The Accutron watch by the Bulova Watch Company is introduced

1980 – The Hague International Child Abduction Convention concludes, after developing a multilateral treaty to provide for quick return of a child under age 16 abducted or detained by a non-custodial parent from one member country to another – as of March 2016, a total of 94 countries are party to the treaty

1983 – Operation Urgent Fury: The U. S. and its Caribbean allies invade Grenada, a nation of 91,000 people, with a force of 7,600 troops, six days after Prime Minister  Maurice Bishop and several of his supporters are executed in a coup d’état – they are met with little resistance

2004 – The first International Artist Day * is held to honor the contributions of artists to humanity – Celebrate! Do something creative today, or take an artist to lunch, buy an artist’s work or a ticket for a performance

Nona Blyth Cloud has lived and worked in the Los Angeles area for over 50 years, spending much of that time commuting on the 405 Freeway. After Hollywood failed to appreciate her genius for acting and directing, she began a second career managing non-profits, from which she has retired. Nona has now resumed writing whatever comes into her head, instead of reports and pleas for funding. She lives in a small house overrun by books with her wonderful husband.
View all posts by wordcloud9 →
This entry was posted in History, Holidays, On This Day and tagged Abel Gance, Beate Sirota Gordon, Deborah Sampson, Henry V, Johann Strauss II, Minnie Pearl, Pablo Picasso. Bookmark the permalink.