1420 – Beijing is officially designated the capital of the Ming dynasty in the same year that the Forbidden City, the seat of government, is completed 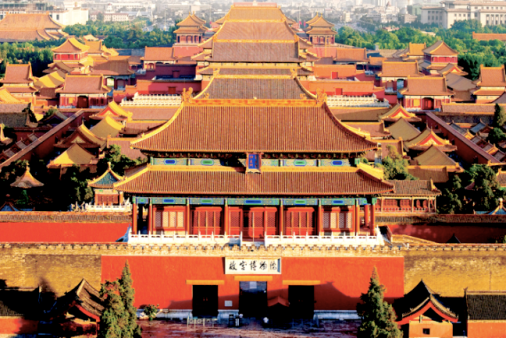 1793 – Eli Whitney applied for a patent for his cotton gin

1886 – ‘Liberty Enlightening the World’ a gift from the people of France, is dedicated by President Cleveland, and quickly becomes better-known as ‘The Statue of Liberty’

1896 – Howard Hanson born, American composer, conductor and musical theorist; director of the Eastman School of Music (1924-1964); won the 1944 Pulitzer Prize for Music for his Symphony no. 4

1897 – Edith Head born, American motion-picture costume designer, who won eight Academy Awards for Best Costume Design, from The Heiress in 1949 to The Sting in  1973; created everything from Dorothy Lamour’s sarong to Audrey Hepburn’s stylish clothes for Breakfast at Tiffany’s

1903 – Evelyn Waugh born, English author of novels, biographies and travel books;  A Handful of Dust,  Brideshead Revisited, and The Loved One

1922 – Gershon Kingsley born in Germany, American composer, pioneer of electronic music and the Moog synthesizer, and co-founder of the First Moog Quartet

1927 – Cleo Laine born as Clementine Bullock, daughter of a Jamaican father and an English mother, English jazz singer with a vocal range over of over three octaves

1929 – Virginia P. Held born, American social-political and feminist philosopher, whose work centers on the ethics of caregiving and the roles of women in society

1940 – Greek Prime Minister Ioannis Metaxas says, “No” to an ultimatum made by Italian Prime Minister Benito Mussolini demanding he allow Italian forces to occupy strategic locations in Greece or otherwise face war – celebrated in Greece and Cyprus as Oxi Day * (Greek for ‘no’ – pronounced ‘oh-hee’)

1956 – Elvis Presley’s song “Love Me Tender” became the No. 1 Billboard Pop Hit, the first time a musician had back-to-back hits in the  No. 1 spot, because “Don’t Be Cruel/Hound Dog” had been the previous No. 1 song for 11 weeks

1965 – Pope Paul VI issues a decree absolving Jews of collective guilt for the crucifixion of Jesus Christ, and the Gateway Arch is completed in St. Louis MO

1965 – The Supremes record “My World is Empty Without You”

1991 – Metallica releases their single “The Unforgiven”

2005 – Vice President Dick Cheney’s top adviser, I. Lewis “Scooter” Libby, resigned after he is indicted on charges of obstruction of justice, perjury and making false statements in the CIA leak investigation. Libby will be convicted and sentenced to 30 months in prison, but President George W. Bush will commute his sentence

Nona Blyth Cloud has lived and worked in the Los Angeles area for the past 50 years, spending much of that time commuting on the 405 Freeway. After Hollywood failed to appreciate her genius for acting and directing, she began a second career managing non-profits, from which she has retired. Nona has now resumed writing whatever comes into her head, instead of reports and pleas for funding. She lives in a small house overrun by books with her wonderful husband.
View all posts by wordcloud9 →
This entry was posted in History, Holidays, On This Day and tagged Cleo Laine, Cristina Fernandez de Kirchner, Edith Head, Ioannis Metaxas, Jane Alexander, Jonas Salk, Trajan. Bookmark the permalink.