The Friday after Thanksgiving has been designated as Native American Heritage Day by Congress, and signed into law by President George W. Bush, but to many Americans, it is ‘Black Friday’ the unofficial start to the Holiday shopping season, a pair of events that jostle each other uneasily.

For this post in honor of Native American Heritage Month, I’ve chosen three poets who speak of the past and the present with keen visions for both.

Kimberly Blazer, a White Earth Chippewa and Anishinaabe,  grew up on the White Earth Reservation in Minnesota. She is a poet, essayist, fiction writer and anthology editor. Her poetry collection Trailing You (1994) won the Native Writer’s Circle of the Americas First Book Award. In 1991, she co-founded the multicultural writers’ organization Word Warriors. Currently, she is the Poet Laureate of the state of Wisconsin.

In this poem, she uses the Japanese Haiku form within a larger poem which combines images of the natural world with phrases like “mechanical as a red oil rig” to weave the past and present together.

the tips of each pine 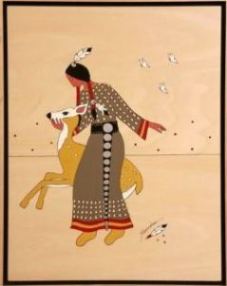 Joseph Bruchac is an Abenaki poet, storyteller and editor who has won a Cherokee Nation Prose Award, a Hope S. Dean Award for Notable Achievement in Children’s Literature, and both Writer of the Year and Storyteller of the Year awards from the Wordcraft Circle of Native Writers and Storytellers. He was also honored with a Lifetime Achievement Award from the Native Writers’ Circle of the Americas. He edited the anthology Breaking Silence (1983), which won a American Book Award.

for Rick Hill and in memory of Buster Mitchell

Steel arches up
past the customs sheds,
the bridge to a place
named Canada,
thrust into Mohawk land.

A dull rainbow
arcing over
the new school,
designed to fan
out like the tail
of the drumming Partridge—
dark feathers of the old way’s pride
mixed in with blessed Kateri’s
pale dreams of sacred water.

When that first span
fell in 1907
cantilevered shapes collapsed,
gave like an old man’s
arthritic back.

The tide was out,
the injured lay trapped like game in a deadfall
all through that day
until the evening.

Then, as tide came in,
the priest crawled
through the wreckage,
giving last rites
to the drowning.

Loading on,
the cable lifts.
Girders swing
and sing in sun.
Tacked to the sky,
reflecting wind,
long knife-blade mirrors
they fall like jackstraws
when they hit the top
of the big boom’s run.

The cable looped,
the buzzer man
pushes a button
red as sunset.
The mosquito whine
of the motor whirrs
bare bones up to
the men who stand
an edge defined
on either side
by a long way down.

They do not see the faces
of men who remain
unseen as those girders
which strengthen and shape.

The Pont de Québec is a road, rail and pedestrian bridge across the lower Saint Lawrence River. The bridge failed twice during construction, at the cost of 88 lives, in 1907 and and again in 1916, taking over 30 years to complete.

“Steel” from Sing: Poetry from the Indigenous Americas – © 2011 by Joseph Bruchac

Anita Endrezze is Yaqui on her father’s side, who was born in California. She is a poet and short story writer, who has written several collections, some with poetry and short stories mixed together. She is also a painter, whose work has appeared on books covers and in shows in Great Britain. Her poetry collection at the helm of twilight (1992) was awarded the Weyerhaeuser/Bumbershoot Award.

From a newspaper photo and article about my godfather,
James Moreno, East Los Angeles, 1950.

(Three police officers took a brutal beating in a wild free-for-all with a family, including three young girls.
From left, James, 19, and Alex, 22, in jail after the fracas
on the porch of their home at 3307 Hunter.)

Jimmy is staring off the page, hands in his pockets.
A four-button dark shirt. No bruises,
but he looks dazed.
Alex wears a leather coat and a polka-dot shirt,
which is in itself a crime.
Nowhere is there a photo of a young girl
with a face carved like a racetrack saint,
eyes with all bets called off,

(Officer Parks had his glasses broken
with his own sap
and was thrown through a window.)

Jimmy and Alex are my dad’s cousins,
lived on Boyle Heights and tortillas.
Mama says the cops always harassed them, those niños
from East L.A., driving their low-riders,
chrome shinier than a cop’s badge.
And why wasn’t Coyote Girl mentioned, that round-armed
girl with a punch like a bag of bees,
a girl with old eyes, her lips cracking open
as she saw the cop sailing through glass, boiling out
of Boyle Heights, skidding on the sidewalk, flat as a tortilla?

(The officers received severe cuts and bruises,
were treated at a hospital and released in time to jail the youths,
who were charged with assault with a deadly weapon.)

Two years later, I was born and Jimmy entered the church,
hands in his pockets, shoulders hunched, watching the christening.
Four drops of water, like popped-off wafer-thin buttons,
fell on my head.

He never showed up that day
or any other. My spiritual guardian must’ve been there
in spirit only.
He didn’t know nada about Got and no one knows
where he is today, but I think you could find him at the end
of a knife. Or in the slash of the z
in ¡La Raza! the dark blood
reds of graffiti. Or tomatoes
grown in old coffee cans
by a white-haired man
sitting in the sun in a dark shirt,
next to an old woman growing younger every day
as I tell her story, my story,

our story
with all the grace and power
of a deadly weapon.

The Gulf of California

There are two memories of tides:
one for the deep blackness that split
away from the mother sea
and one for sea that found itself
in the daybreaks of rivers.
Yet it was all one sea
tracked by comets and the Elegant Tern,
seals in speckled pod-shaped skins,
and whales, opening their small eyes
when the hands of people drew fish
out of the salt.

Geologists tell us that the sea split
millions of years ago
before the Yoemem, Yoremem,
Kunkaak, O-Otam
curled their tongues around the names
of themselves and raised the conch shell
to their lips, so that the sound of nature
became human, too:

Then the sea was measured
and divided into leagues.
The Spanish ships called it dangerous
because the sea tore in two ways,
tide and rivers,
so they contained it in maps
written on dead animal skins
with ink made from dried octopus blood

Then it was named the Vermilion Sea
when the red-shelled crabs clicked in the waters.
It was the Sea of Cortés
because it’s the right of the Conqueror
to claim the world in his name.

It’s his right to name hunger after himself
and to take away rivers
and children
and to give back the bare bones
of life
in the Queen’s name.

What can you say about men
who name the mountains “mother”
madre
when the worst curse they can shout
defiles their mother
in the act of creation?

Now we call the Gulf of California
polluted
with the pesticides of fields
and the wastes of factories.
And the voices of the fin-backed whale,
sardines, sea-kelp, anemone,
and turtle are quieter,
so that we have less memory
of the way it was
and less hope
for the way it will be.

“Anonymous is Coyote Girl” and “The Gulf of California” are both from Throwing Fire at the Sun, Water at the Moon, © 2000 by Anita Endrezze – University of Arizona Press

Joy Harjo has written, “The literature of the aboriginal people of North America defines America. It is not exotic. The concerns are particular, yet often universal.”

Nona Blyth Cloud has lived and worked in the Los Angeles area for the past 50 years, spending much of that time commuting on the 405 Freeway. After Hollywood failed to appreciate her genius for acting and directing, she began a second career managing non-profits, from which she has retired. Nona has now resumed writing whatever comes into her head, instead of reports and pleas for funding. She lives in a small house overrun by books with her wonderful husband.
View all posts by wordcloud9 →
This entry was posted in Poetry, Word Cloud and tagged Abenaki, Anita Endrezze, Joseph Bruchac, Kimberly Blazer, Sheridan MacKnight, Storytellers, White Earth Chippewa-Anishinaabe, Yaqui. Bookmark the permalink.
Loading Comments...
%d bloggers like this: