who knew? Victoria Nuland is the Deep State

Nastya Rybka, who was allegedly one of several sex workers on the yacht. She filmed the trip in an Instagram post, footage of which can be seen in Navalny’s video. In it, Deripaska sits next to Prikhodko and light-heartedly tells Rybka, “We have bad relations with America. Why? Because Sergei Eduardovich’s [Prikhodko] friend is responsible for them. Her name’s Nuland,” he said, referring to Victoria Nuland, then a senior State department official working on Russia. “Nuland, when she was your age, spent a month on a Russian whaling boat. After that she hates our country.”

Like WWII Gremlins, the Deep State is responsible for every snafu made in the factory for conspiracy theory machines.

So it makes sense when  Oleg Deripaska writes his op-ed in the Daily Cellar, that pizzeria basement where all the 400 pound guys are, hacking DNC servers, and sewing bowties for Tucker Carlson.

Just when you thought #TrumpRussia couldn’t get wackier… Aluminum Czar Oleg Deripaska, holder of Paul Manafort’s marker, decides he wants to weigh in on the RWNJ meme of the Deep State, probably also the real killer OJ Simpson’s looking for.

Lest you think that RWNJs are the only purveyor of the Deep State CT, Oleg Deripaska, now claims it’s in charge of the entire operation of those persecuting President Dennison. Because it couldn’t be Russian trolls, hackers, and spies who meddle in the US election. And it couldn’t be members of the GOP who took Russian money via PACs and superPACS.

Oh, and George Soros is the real enemy… who knew! He’s going to at least get an executive producer credit on the Trump regime’s biopic.

Deripaska is another Russian oligarch friend of Putin and Deputy PM Prikhodko. He’s also the subject of some interesting relationships including interfering in the politics of Ukraine and working with Paul Manafort, but more recently being outed in order for his “mistress’ to negotiate being freed from Thai custody. Gangsters couldn’t be involved in any of this… nah. Oleg’s not doing anything to counteract the bad press of the video released by Alexi Navalny

When I attended the Munich Security Conference in February, the extraordinary, coordinated message of a panel of U.S. senators was summarized by moderator Victoria Nuland, former assistant secretary of state under President Barack Obama, as: “Deep State-proud loyalists giv[ing] broad reassurance about continuity.” One of the panelists, Sen. Sheldon Whitehouse (D-R.I.), said: “What the Breitbart crowd would call the ‘Deep State’ is what many of us would call ‘knowledgeable professionals.’” The panel’s uniform message was essentially: Ignore Donald Trump and increase your defense budget to 2 percent, because the generals who are ‘operationalizing policy’ remain in charge.

When you owe the world $18 trillion, the only way to get them to “pay 2 percent for defense” is to manufacture a boogeyman. Russian novelist and pacifist Leo Tolstoy observed: “There is no war which was not hatched by the governments, the governments alone, independent of the interests of the people.”

Oleg Deripaska has published an op-ed in the Daily Caller https://t.co/PCdkiBcGSX

Perhaps Oleg can tell us how much additional money the US aluminum tariff will give him.

And the better metaphor is not Wag the Dog but Three Billboards outside Ebbing, MO. 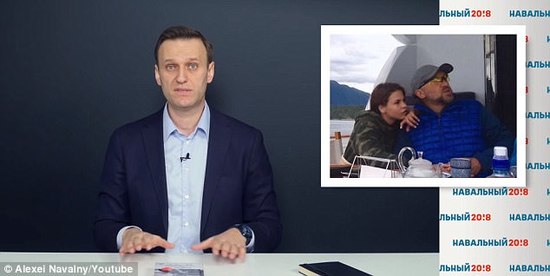 In a 25-minute Youtube video (Russian with subtitles), Navalny shows footage of Deripaska with Russian deputy prime minister Sergei Prikhodko on his yacht in Norway in August 2016. Based on that footage, he alleges that information about the Trump campaign must have passed between the two.Navalny bases his allegations on accounts written by an escort, self-described “sex hunter” Nastya Rybka, who was allegedly one of several sex workers on the yacht. She filmed the trip in an Instagram post, footage of which can be seen in Navalny’s video.Paul Manafort worked with Deripaska for many years before joining the Trump campaign, and was under FBI investigation as early as 2014. In 2016, while working as Trump’s campaign manager, Manafort reportedly offered (paywall) to brief Deripaska on the Trump campaign.

Not suggesting she pissed on a Moscow/Ritz Carlton bed in 2013….but wouldn’t that be mind-blowing?

Seeking Asylum, an Escort Has a Tale of Trump and Russia to Offer https://t.co/5egSqIGOfn

2 Responses to who knew? Victoria Nuland is the Deep State