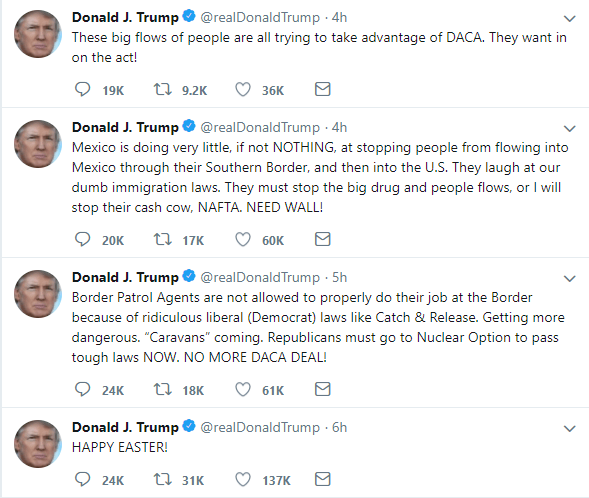 The travails of Prexy Nehemiah Dennison are many, but his minions certainly built enough roads to Moscow during the election, and his golf-day yesterday with Sean Hannity brought perhaps more advice about spinning more southern border wall nonsense on Easter, no less. He’s a busy guy, what with the legacy of Nehemiah.

Whaa? Some guy on CNN who wrote a book “God & Donald Trump” just said Trump can’t go to church most Sundays because he’s “very busy”. HE’S GOLFING, FFS. I know Trumphumpers don’t know much but they don’t even know Trump.

Nehemiah is blamed by the Rabbis for his seemingly boastful expression, “Think upon me, my God, for good” (Neh. v. 19, xiii. 31), and for his disparagement of his predecessors (ib. v. 15), among whom was Daniel.

In the 20th year of Artaxerxes, king of Persia, (445/444 BC), Nehemiah was cup-bearer to the king.[5] Learning that the remnant of Jews in Judah were in distress and that the walls of Jerusalem were broken down, he asked the king for permission to return and rebuild the city.[6] Artaxerxes sent him to Judah as governor of the province with a mission to rebuild, letters explaining his support for the venture, and provision for timber from the king’s forest.[7]

POTUS walked slowly into church, stopping to wave to assembled press. He answered one question from the pool about DACA:

Q: mr. President, what did you mean by no DACA deal?

I now wish that Trump went golfing today instead of Easter Mass. He has been so unhinged in his most vile way, than currently in one day!
On a day of remembrance and love, he’s only pushing hate!
Whats Up Evangelicals????

You know today must be a Christian holiday: Greedy, divorced, warmongering, judgmental, retaliatory Republicans, whoÃ¢ÂÂve made careers of withholding from the poor, are pretending to follow Jesus.

Vandals over night splashed red paint on the left entrance sign of Trump international Golf Club where the president was yesterday… a spokeswoman for the Palm Beach County Sheriffs Office confirms the Secret Service is investigating the incident.

Trump spent this weekend golfing at his golf course. We recently filed a complaint against his golf course for using the Presidential Seal. His private businesses are not part of the federal government. He’s not there in his official capacity as president. https://t.co/8zDzpIC6se

At his own request Nehemiah is sent to Jerusalem as governor of Yehud, the official Persian name for Judah. Jerusalem had been conquered and destroyed by the Babylonians in 586 BC and Nehemiah finds it still in ruins.

He then purifies the Jewish community by enforcing its segregation from its neighbours and enforces the laws of Moses.

“This is a Trump Wall!” he announced. “This is a real wall”

He added that, much like the Great Wall of China, which was built 2,000 years ago and covered a length of 13,000 miles, his wall will “be a wall that you can’t get over with a ladder from Home Depot.” conservativetribune.com/…

TrumpÃ¢ÂÂs threat to Ã¢ÂÂstopÃ¢ÂÂ NAFTA comes amid tense talks with Mexico. As we reported, his call with Pena Nieto a few weeks ago got testy because Trump refused to publicly affirm Pena-NietoÃ¢ÂÂs position that Mexico wonÃ¢ÂÂt pay for wall https://t.co/HMhBUFAHqn

“Mexico is going to pay,” Trump explained in a later part of his speech. “When you have Trump negotiating for you, they will pay 100 percent.”

The name Sha’ar Ha’ashpot appears in the Book of Nehemiah 2:13-14. It is probably named after the residue that was taken from the Jewish Temple into the Valley of Hinnom, where it was burned. This ancient “Dung Gate” may not have been in the same location as the 16th-century gate, which only received this name in the 19th century.[1]

Israel plans to name a high-speed rail station in Jerusalem after President Trump. The project comes after he announced plans to move the US Embassy there. https://t.co/AmME7tFTjO pic.twitter.com/GIXtJGWAMF

“The station, which will be built inside the walls of the Old City, will drop off passengers near the Dung Gate, which leads straight to the Western Wall”

Just a hunch, but I’m thinking this is their first to honor someone who SUPPORTS Nazis. #GoodPeople pic.twitter.com/HWPWFi2EsD

CNN: “Jerusalem has named a train station for Donald Trump, at the Old City’s Dung Gate.”

Trains will pick up passengers there and take them to Ã¢ÂÂthe Dung GateÃ¢ÂÂ… true. https://t.co/GKCt6HcgDQ