Trump’s strangely transparent sense of his own cleverness was on display this morning, trying to deflect from the continuing unraveling of #TrumpRussia.

It is apparent that no one from Mueller’s side leaked any questions for a variety of reasons, not the least of which are how the questions themselves were framed.

So disgraceful that the questions concerning the Russian Witch Hunt were Ã¢ÂÂleakedÃ¢ÂÂ to the media. No questions on Collusion. Oh, I see…you have a made up, phony crime, Collusion, that never existed, and an investigation begun with illegally leaked classified information. Nice!

And as if he thought he wasn’t clear enough about his cleverness… he tweeted an hour later, because Fox and Friends probably mentioned that the tweet itself could constitute Obstruction of Justice….

It would seem very hard to obstruct justice for a crime that never happened! Witch Hunt! 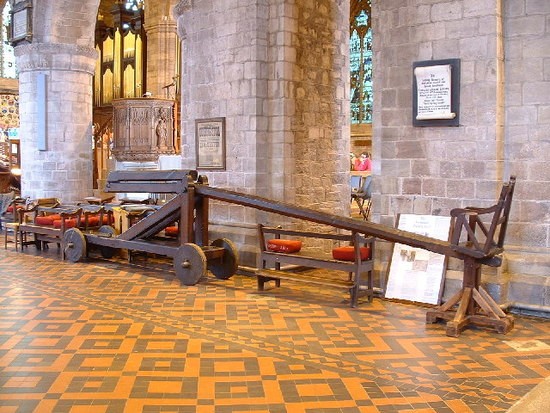 Cucking stools or ducking stools were chairs formerly used for punishment of disorderly women, scolds, and dishonest tradesmen in England, Scotland,[1] and elsewhere.[2] The cucking-stool was a form of wyuen pine(“women’s punishment”) as referred to in Langland’s Piers Plowman (1378). They were both instruments of public humiliation and censure primarily for the offense of scolding or back biting and less often for sexual offences like bearing an illegitimate child or prostitution. The stools were technical devices which formed part of the wider method of law enforcement through social humiliation. A common alternative was a court order to recite one’s crimes or sins after Mass or in the market place on market day or informal action such as a Skimmington ride. en.wikipedia.org/…

Social media can sometimes punish dishonest tradesmen, and how more appropriate is it in the case of Trumpery for someone to suffer using “instruments of public humiliation and censure primarily for the offense of scolding or back biting”

Unfortunately, kangaroos often make the judgments in the court of public opinion.

There are now at least six questions that do need answers rather than prevarication, even if one can expect Lord Dampnut will evade the Committee of Public Safety.

No doubt there will be some disinformation to explain away Trump’s ultimate reluctance to speak with Mueller even if he’s not a target but a subject of the investigation. Leaking 49 questions only generates exponentially more troubling questions about #TrumpRussia and its obstruction.

• What communication did you have with Michael D. Cohen, Felix Sater and others, including foreign nationals, about Russian real estate developments during the campaign?

• What discussions did you have during the campaign regarding any meeting with Mr. Putin? Did you discuss it with others?

• What discussions did you have during the campaign regarding Russian sanctions?

• What involvement did you have concerning platform changes regarding arming Ukraine?

• During the campaign, what did you know about Russian hacking, use of social media or other acts aimed at the campaign?

• What knowledge did you have of any outreach by your campaign, including by Paul Manafort, to Russia about potential assistance to the campaign?

Wait, was it actually @realDonaldTrump lawyer Jay Sekulow who came up with the questions that Trump railed against today? https://t.co/4g6HvS0mLH

If you want people to believe you’re wrongfully accused, the subject of malicious scrutiny on the part of your enemies, you cry that you’re the target of a witch hunt.

Trump didn’t pick this phrase out of thin air. Politically, this goes back at least to McCarthyism and Watergate. The Nixon White House also claimed he was the subject of a witch hunt. Critics of Sen. Joe McCarthy’s insidious anti-communist probes called them witch hunts. Back in those days, playwright Arthur Miller made the subtext text with his play The Crucible, an anti-McCarthy allegory set during the Salem witch trials of the 1690s.

Which is where our story really begins. In the modern setting, “witch hunt” is a useful defense because people living in the 21st century know that the “witches” of 17th-century Salem were almost certainly innocent and, therefore, that the persecutions that led to 20 deaths were unjust.

“It’s a 20th-century term that comes into use during the Cold War. There was no single, directed, witch-identifying force in America’s 17th-century prosecutions,” Stacey Schiff said.

“In that sense, Salem does not actually constitute a ‘hunt.’ It’s more a panic, or an epidemic, or a societal delusion.”

On the one hand, Trump comparing the investigation into his campaign to a crisis that left 20 people dead in the 17th century is clearly ridiculous — there is much more evidence in the criminal indictments, the court-sanctioned wiretaps, and the consensus of Republican and Democratic investigators for Russian interference in the 2016 presidential election than there is for witchcraft — and rather unsavory.

As for Greitens, who is so transparently drafting off Trump’s tactics, his use of the term might be even more galling: This is a man accused of coercing a woman into sexual acts and then threatening to blackmail her if she talked.

“There is something twisted, misdirected, and vaguely demented in the cries of ‘witch hunt,’” Schiff said. “Many American women (and a handful of men) did protest their innocence. They were not witches, though the courts decided they were; they hanged all the same. None ever cried ‘witch hunt.’”

The more details we learn about these four deep silos of MuellerÃ¢ÂÂs inquiry, the harder it is to credit TrumpÃ¢ÂÂs Ã¢ÂÂNothing-to-See-HereÃ¢ÂÂ/Ã¢ÂÂWitch-HuntÃ¢ÂÂ bravado. No innocent person would ever act the way Trump is acting. Not even close.

“This is a man accused of coercing a woman into sexual acts and then threatening to blackmail her if she talked.”

Year later we learn what they discussed about leakers. Comey wanted “to nail one to the door as a message.” Trump said they needed to go after reporters and putting them in jail – like Judy Miller – worked. Comey said he would talk to Sessions about it. https://t.co/MKYDUkxk8Z https://t.co/B1p4t6ciAM

Reince Priebus asked Comey directly if there was a wiretap on Mike Flynn. Trump had timeline for his 2013 Moscow trip that he claimed showed there was no way there could be a urination tape. And the other greatest hits from the Comey memos. https://t.co/MKYDUkxk8Z

SCOOP: Trump called Michael Cohen Friday to check in. Defense lawyers often caution witnesses and subjects to no talk during an ongoing investigation because it appears like they may be conspiring together. W/@maggieNYT @mattapuzzo https://t.co/smqbQDXpVE