Fire on the Hills

Under the smoke in front the roaring wave of the brush-fire;
I thought of the smaller lives that were caught.
Beauty is not always lovely; the fire was beautiful, the terror
Of the deer was beautiful; and when I returned
Down the back slopes after the fire had gone by, an eagle
Was perched on the jag of a burnt pine,
Insolent and gorged, cloaked in the folded storms of his shoulders
He had come from far off for the good hunting
With fire for his beater to drive the game; the sky was merciless
Blue, and the hills merciless black,
The sombre-feathered great bird sleepily merciless between them.
I thought, painfully, but the whole mind,
The destruction that brings an eagle from heaven is better than mercy.

“Fire on the Hills” from The Selected Poetry of Robinson Jeffers, edited by Tim Hunt, Stanford University Press, 2001

For the past several days, the highs here have been well into the 100s, and the lows in the high 70s.  Our usual afternoon sea breeze has been transformed into a desert dragon’s blast of fire.

Even the New York Times has taken notice:

Record Heat in Southern California, and
an Ominous Start to Wildfire Season 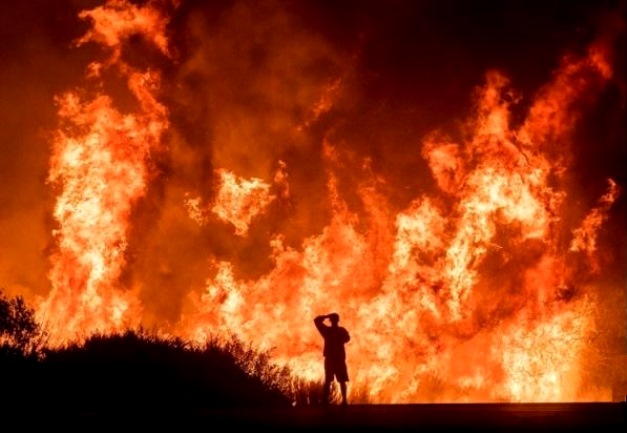 There are already over a dozen fires, all the way from California’s southern border with Mexico to our northern border with Oregon.  One person has died, and dozens of homes have been destroyed.

Fruit cannot drop
through this thick air –
fruit cannot fall into heat
that presses up and blunts
the points of pears
and rounds the grapes.

Cut the heat –
plough through it,
turning it on either side
of your path.

Nona Blyth Cloud has lived and worked in the Los Angeles area for the past 50 years, spending much of that time commuting on the 405 Freeway. After Hollywood failed to appreciate her genius for acting and directing, she began a second career managing non-profits, from which she has retired. Nona has now resumed writing whatever comes into her head, instead of reports and pleas for funding. She lives in a small house overrun by books with her wonderful husband.
View all posts by wordcloud9 →
This entry was posted in Poetry, The Coffee Shop and tagged California Wildfires 2018, Dante Alighieri, Fire on the Hills, H.D., Heat, Inferno, Robinson Jeffers, TCS. Bookmark the permalink.