High Holy Days, Batman. 9/11 is the release day for Bob Woodward’s book, Fear and the Trump regime is scrambling. 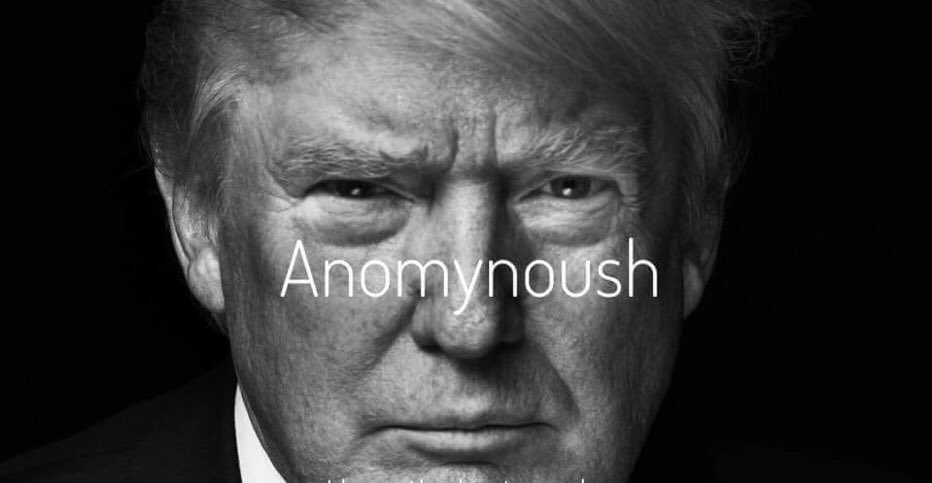 It now seems more obvious the anonymous Op-Ed in the NY Times was designed to offset Woodward’s book, even as it continues to portray an infantile POTUS*, while preserving the GOP agendas. CBS describes the op-ed as an “unusual confirmation” of the danger posed by Trump’s impulsiveness.

They are connected, that anonymous NY Times op-ed piece providing cover for rationalizing the consolidation of RW judicial power and the malevolence of the WH, by trying to assure an angry populace of what they claim is the beneficence of their treachery. By their RWNJ allies we do know them, even as fractures appear to separate the clinically insane racists from the merely pathological liars.

The NY Time’s anonymous op-ed and its resulting snipe hunt are still distractions, telling us by omission that we shouldn’t worry about Russians’ past mischief or their forthcoming electoral attack. Just trust the GOP as much as Shera Bechard should have trusted Elliott Broidy and his herpes.

Aides like then-Chief Economic Adviser Gary Cohn and White House Staff Secretary Rob Porter literally stole documents off the president’s desk in the Oval Office, such as a letter terminating a trade agreement with South Korea, so that, Woodward explained,

Mr. Trump could not sign them: “Because they realized that this would endanger the country.”

Martin asked, “How’d they get away with that?”

“[Trump] doesn’t remember. If it’s not on his desk, if it’s not immediately available for action, it goes away.”

Unelected officials like Cohn and Porter intentionally thwarting the actions of the elected president – the exact reverse of what a White House staff is supposed to do.

In the first TV interview about his upcoming book “Fear,” Bob Woodward tells @CBSSunday that “people better wake up to what’s going on” in the Trump administration. “You have to say, ‘Let’s hope to God we don’t have a crisis'” https://t.co/G73fNN4KHJ pic.twitter.com/wHJQ3ZfAFF

Trump: “‘Rocket Man’ is on a suicide mission for himself and for his regime.”

The president later made that “Little Rocket Man” on Twitter, which he told Rob Porter “may be my best ever.” When Porter asked if it might provoke Kim, according to Woodward, the president replied, “It’s leader versus leader, man versus man, me versus Kim.”

The most dangerous moment of the standoff, Woodward says, came when the president went to work on another tweet: “He drafts a tweet saying ‘We are going to pull out dependents from South Korea … Family members of the 28,000 people there.'”

That tweet was never sent, because of a back channel message from North Korea that it would regard a pullout of dependents as a sign the U.S. was preparing to attack. “At that moment there was a sense of profound alarm in the Pentagon leadership that, ‘My God, one tweet and we have reliable information that the North Koreans are going to read this as an attack is imminent,'” Woodward said.

The theme of Woodward’s book – that aides fear what the president might do if allowed to follow his impulses – received an unusual confirmation last week, when The New York Times published an anonymous article written by a person described as “a senior official in the Trump administration.” “I work for the president, but like-minded colleagues and I have vowed to thwart parts of his agenda and his worst inclinations,” he or she wrote.

And as if on cue, Giuliani has another “Germans bombed Pearl Harbor” moment in missing the point of Woodward’s book:

It was as if one of Woodward’s sources had chosen to publish a real-time epilogue in the pages of the Times.

Reading the Op-Ed, I immediately thought of an amazing passage in the book, which quoted a summary of a national-security meeting written by a White House official (and which never even made it into the news accounts about the book). It said, “The president proceeded to lecture and insult the entire group about how they didn’t know anything when it came to defense or national security. It seems clear that many of the president’s senior advisers, especially those in the national security realm, are extremely concerned with his erratic nature, his relative ignorance, his inability to learn, as well as what they consider his dangerous views.”

Both the Op-Ed and the book convey the laments of conservatives who, in many respects, are fine with the Trump agenda but not with the man. That is, for now, what passes for the Republican wing of the resistance. So far, it is mostly underground, or perhaps still largely nonexistent; we don’t really know. The Republicans who control Capitol Hill have not joined, or even made token moves toward addressing these significant concerns raised by members of their own party. Instead, the silence from the congressional G.O.P., awaiting its fate in the November midterm elections and still wary of crossing the President who remains popular with the Republican base, has been deafening.

More interesting is speculation and odds-making on the identity of the anonymous op-ed author:

A columnist for The Washington Post as well as oddsmakers have suggested that Jared Kushner could be the White House official behind the controversial anonymous New York Times op-ed declaring a “resistance” within the administration of Donald Trump.

David Von Drehle argued that Kushner, the president’s son-in-law, is the person with the greatest incentive to write such an article. He also pointed out that bookies have given it 12-1 odds that the husband of Ivanka Trump is behind the op-ed.

“Rarely a month has passed during the reign of The Donald without a story leaking about his son-in-law and daughter laboring to curb the excesses of President Daddy,” Von Drehle wrote.

“The Jared Theory also answers a question so many have asked since the op-ed was published on Wednesday: Why doesn’t this self-styled patriot resign? There’s no leaving for Jared Kushner. As the saying goes: You marry The One, you marry the family,” he argued.

Ex-Trump Lawyer Told Mueller Trump Is Too Dumb to Testify

Woodward is able to document a development that was still only a glint in Trump’s eye at the time Michael Wolff lost his access to the White House: the Mueller probe.

According to CNN’s report on the 448-page book, Trump’s then-personal attorney John Dowd became convinced that Trump could not be allowed to speak to Robert Mueller because the president would inevitably perjure himself.

Trump, as has been previously reported, rebelled, insisting that he could exonerate himself if only he could testify with the special counsel. Dowd, Woodward reports, decided to conduct a mock interview on January 27 to prove his point.

Trump failed, according to Dowd, but the President still insisted he should testify.

Woodward writes that Dowd saw the “full nightmare” of a potential Mueller interview, and felt Trump acted like an “aggrieved Shakespearean king.”

Michelle Goldberg writes another incisive op-ed about the stakes entailed in approving the nomination of Brett Kavanaugh, amidst his now numerous perjuries. More specifically she pillories the GOP Senators enabling the slide into the corruption of crony kleptocrats led by Lord Dampnut and his CT sideshows.

There are plenty of reasons Kavanaugh shouldn’t be confirmed. Leahy made a credible case that the judge once lied under oath about his knowledge of a scandal involving documents stolen from Senate Democrats, which happened when Kavanaugh was in the Bush administration. If Senator Susan Collins, Republican of Maine, were actually committed to preserving Roe v. Wade, she would raise the alarm about a leaked email in which Kavanaugh questioned the idea that the 1973 abortion decision is “settled law.” But realistically, barring a last-minute outbreak of conscience from two Senate Republicans, Kavanaugh will soon sit on the Supreme Court.

He will owe his elevation to Trump, who is in effect an unindicted co-conspirator in a campaign finance crime that helped him achieve his minority victory. There’s every reason to believe that Kavanaugh will shield the president from accountability or restraints on his power. Yet even Republicans who think Trump is a menace are desperate to confirm his judicial pick.

What we have here, in miniature, is the corrupt bargain Washington Republicans have made with a president many of them privately despise. They know Trump is unfit, but he gives them tax cuts and right-wing judges. Those tax cuts and right-wing judges, in turn, strengthen the president’s hand, buying him gratitude from rich donors and potential legal cover. Republicans who participate in this cycle seem convinced that the situation is, and will remain, under their control.