The only thing we have to trump is fear itself

“Fear: Trump in the White House,” which came out Tuesday, is the truth, Woodward said, about an administration headed by a man he describes as “emotionally overwrought, mercurial and unpredictable,” and it’s already engendering outrage from President Trump himself.” (ABC)

Only the blind led the blind in Trump Tower, especially in June 2016. But more interesting is Barbara Res telling stories about her former boss, challenging the notion of the “adults in the room” and their agendas.

Trump looked at the panels where the buttons you push to reach a floor were located. He noticed that next to each number were some little dots.

Trump told the architect to take it off, get rid of it.

“Get rid of the (expletive) braille. No blind people are going to live in Trump Tower. Just do it,” Trump yelled back, calling him weak.

The more the architect protested, the angrier Trump got. Donald liked to pick on this guy. As a general rule, Trump thought architects and engineers were weak as compared to construction people. And he loved to torment weak people.

But did he think the architect would remove the Braille from the panels? Never.

Trump is really not all that different now, but the stakes are higher. And there aren’t many order refusers anymore either. Off the record, staffers tell reporters that Trump is out of control.

When you finally get to the end of Fear, you truly realize the only thing you have to fear is fear itself, since the last chapter demonstrates that Trump is really a “fucking liar”.

The real problems are all these GOP enablers who also need to go, including the anonymous NY Time Op-Ed author.

More importantly is that the chapter’s source, probably John Dowd, has not yet denounced Bob Woodward in terms of specifics, although he has said there are “misrepresentations”.

Woodward probably didn’t ask about or couldn’t use Dowd’s claim that he was the author of this Trump tweet, since he’s left this to Mueller:

I had to fire General Flynn because he lied to the Vice President and the FBI. He has pled guilty to those lies. It is a shame because his actions during the transition were lawful. There was nothing to hide!

If Trump knew that Flynn was in the FBI’s crosshairs when he asked former FBI Director James Comey — whom he later fired — to consider “letting Flynn go” the day after Flynn resigned, that could bolster the obstruction case federal prosecutors are building against Trump.

Dowd drew criticism after he claimed that he drafted the tweet. Former White House ethics lawyer Richard Painter said that Dowd should be disbarred for incriminating his own client.

Walter Shaub, former Director of the U.S. Office of Government Ethics , doubted that Dowd truly wrote the tweet, noting the phrasing, which said “pled” instead of the correct term, “pleaded.”

I dare you to tell Mueller you logged into POTUSÃ¢ÂÂs Twitter account and wrote Ã¢ÂÂpledÃ¢ÂÂ and the rest of that, John Dowd. I dare you. https://t.co/gDBnISywGS

Shaub later said that Dowd’s reason for posting the tweet makes no sense, prompting him to ask, “Why would you write the tweet then, Dowd? Or did you?”

DowdÃ¢ÂÂs explanation to CNN makes no sense. He claims he wrote the tweet claiming Flynn was fired partly for lying to the FBI, but he also rejects the idea that POTUS knew Flynn had lied. Why would you write the tweet then, Dowd? Or did you?
(@NatashaBertrand makes a similar point) pic.twitter.com/3hfU1Nllls

It’s a fair question, but my guess is that Dowd was lobbing a Hail Mary to save his client. While it may not make a ton of sense, and certainly doesn’t make Dowd look good, there could be a method to the madness.

“I have not read Bob Woodward’s book, which appears to be the most recent in an endless cycle of accusations and misrepresentations based on anonymous statements from unknown malcontents. www.washingtontimes.com/…

We all need to speak Parseltongue if we’ve elected a snake, but the snakiest act was that the anonymous NY Times op-ed, is now more obviously a stunt designed to keep him in power. Masha, Masha, Masha…

A must-read further dissection of the corruption inherent in the Anonymous OpEd by @mashagessen via @NewYorker. https://t.co/JyA30UJPFw

…The thing about autocracies, or budding autocracies, is that they present citizens with only bad choices. At a certain point, one has to stop trying to find the right solution and has to look, instead, for a course of action that avoids complicity. By publishing the anonymous Op-Ed, the Times became complicit in its own corruption.

Even the so-called Deep State needs its media. “To date, nearly all of the “fake news” leaks that have so irritated Trump have subsequently proven to be true….It is a delicious irony to think that the hated deep state and the detested media will save our democracy. Those who believe otherwise do not understand our country.”

“In fairness to Trump, he’s a disrupter. He’s somebody who was elected to change things. … If we have a real crisis, how do you put all this together? How do you get information? How do you evaluate it? How do you determine what’s real?” @Nightline https://t.co/JkV97N5Vdz

Woodward called it “a nervous breakdown of the executive power of the most powerful country in the world,” and said the White House staff joined together to “purposefully block some of what they believed were the president’s most dangerous impulses.”

Another example of this, according to Woodward, occurred when images surfaced showing Syrian President Bashar Al Assad had launched a chemical attack on unarmed civilians. Woodward said there was a moment where the president called Defense Secretary Jim Mattis and said, according to Woodward, “Let’s ——- kill him!… Let’s go in. Let’s kill the ——- lot of them.”

“It was kind of, ‘Let’s get the —-er,’ and he wanted him killed,” Woodward said. “And Mattis, the Secretary of Defense, former general, was very deferential, ‘We’ll get right on it.’ And then he turned to an aide and said, ‘We’re not going to do that. We’re going to come up with more reasonable measured options.'”

“Basic economics, the president does not comprehend,” Woodward continued. “And there’s scenes in the book where they are trying to point out to him that 99.9 percent of the economists don’t worry about trade deficits with individual countries… And they ask him where he got these ideas. He said, ‘I’ve had these ideas for 30 years.'”

The thing is, one can and should evolve and learn. Trump is quite confident in his ignorance, much to our dismay.

Ã¢ÂÂWe have a contest in this country. Not just a political one but a moral one, a religious one, about whatÃ¢ÂÂs true. Right? And people debate it and argue very intensely about it. And thatÃ¢ÂÂs kind of the life force of democracy, isnÃ¢ÂÂt it?Ã¢ÂÂ @maddow https://t.co/ouwwSBWnnA 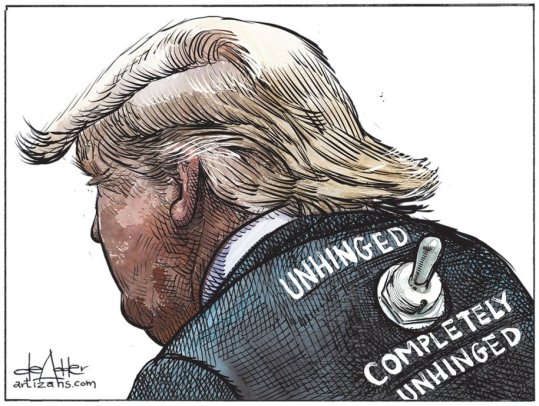