The Friday after Thanksgiving has been designated as Native American Heritage Day in the U.S. since 2008, but some Native Americans feel the day is a poor choice, since it coincides with the aggressive capitalism and greed of ‘Black Friday,’ annual opening day of the Christmas shopping frenzy. Thanksgiving itself is viewed by some as a “day of mourning”  as it celebrates the survival of the Pilgrims, part of the first wave of colonialists to arrive in North America, which would so drastically wipe out millions of the First Peoples, and end forever the way of life of the survivors.

So I offer you a poem by Joy Harjo, which seems to me to express both something unique to her Mvskoke heritage, and something universal about kitchen tables.

The world begins at a kitchen table. No matter what, we must eat to live.

The gifts of earth are brought and prepared, set on the table. So it has been since creation, and it will go on.

We chase chickens or dogs away from it. Babies teethe at the corners. They scrape their knees under it.

It is here that children are given instructions on what it means to be human. We make men at it, we make women.

At this table we gossip, recall enemies and the ghosts of lovers.

Our dreams drink coffee with us as they put their arms around our children. They laugh with us at our poor falling-down selves and as we put ourselves back together once again at the table.

This table has been a house in the rain, an umbrella in the sun.

Wars have begun and ended at this table. It is a place to hide in the shadow of terror. A place to celebrate the terrible victory.

We have given birth on this table, and have prepared our parents for burial here.

At this table we sing with joy, with sorrow. We pray of suffering and remorse. We give thanks.

Perhaps the world will end at the kitchen table, while we are laughing and crying, eating of the last sweet bite. 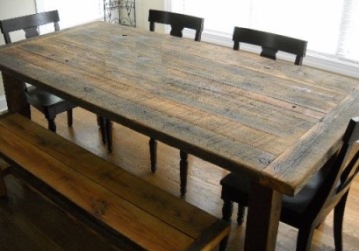 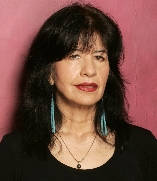 Joy Harjo (1952 – ) is a poet, musician, author, activist and teacher. Born in Tulsa, Oklahoma, she is member of the Mvskoke tribe, and a highly influential figure in the second wave of the artistic Native American Renaissance. She studied at the Institute of American Indian Arts, earned her undergraduate degree at the University of New Mexico, and an MFA from the University of Iowa’s Creative Writing Program. Harjo is the recipient of many awards, including the 2009 Eagle Spirit Achievement Award and the Wallace Stevens Award in Poetry by the Academy of American Poets

Nona Blyth Cloud has lived and worked in the Los Angeles area for the past 50 years, spending much of that time commuting on the 405 Freeway. After Hollywood failed to appreciate her genius for acting and directing, she began a second career managing non-profits, from which she has retired. Nona has now resumed writing whatever comes into her head, instead of reports and pleas for funding. She lives in a small house overrun by books with her wonderful husband.
View all posts by wordcloud9 →
This entry was posted in Poetry, Word Cloud and tagged Black Friday, Joy Harjo, Native American Heritage Day, Perhaps the World Ends Here, Table, Thanksgiving. Bookmark the permalink.