It’s an irony that the things I like best about Christmas are traditions from places where Winter means snow and ice. The smell of pine warmed by glowing lights, carols full of cold Decembers, and hot Wassail in the punch bowl.  None of these are indigenous to my birth-state Arizona, or to Southern California.

Of course, these joyous Holiday things are deeply rooted in Paganism – Christmas has merely borrowed its older siblings’ finery. The Winter Solstice has been called by many names, but its ancient rites and customs are far more ingrained in the season than the America of Currier and Ives recognizes. Rites and customs that were already here among the first peoples on the land, but also came hidden even in the bosom of Puritanism from across the sea.

Without these hidden treasures from the past, there would be little worth eating or drinking at the Christmas feast, houses would be starkly bare of decoration, and even many a cherished carol would fall silent if its ancient tune were returned to the pagan bard who first played it.

In this poem by Mary Oliver, there is a hint of paganism in her imagined wind-bird, which brings us a kinder, gentler winter snow:

with its white eyes
shoves and pushes
among the branches.
Like any of us

he wants to go to sleep,
but he’s restless—
he has an idea,
and slowly it unfolds

from under his beating wings
as long as he stays awake.
But his big, round music, after all,
is too breathy to last.

So, it’s over.
In the pine-crown
he makes his nest,
he’s done all he can.

I don’t know the name of this bird,
I only imagine his glittering beak
tucked in a white wing
while the clouds—

thicken, and begin to fall
into the world below
like stars, or the feathers
of some unimaginable bird

that loves us,
that is asleep now, and silent—
that has turned itself
into snow. 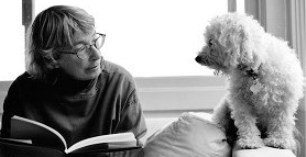 The bird in this Thomas Hardy poem, however, hints at Glad Tidings in the midst of a harsh cruel winter:

I leant upon a coppice gate
When Frost was spectre-grey,
And Winter’s dregs made desolate
The weakening eye of day.

The tangled bine-stems scored the sky
Like strings of broken lyres,
And all mankind that haunted nigh
Had sought their household fires.

The land’s sharp features seemed to be
The Century’s corpse outleant,
His crypt the cloudy canopy,
The wind his death-lament.

The ancient pulse of germ and birth
Was shrunken hard and dry,
And every spirit upon earth
Seemed fervourless as I.

At once a voice arose among
the bleak twigs overhead
In a full-hearted evensong
Of joy illimited;

An aged thrush, frail, gaunt, and small,
In blast-beruffled plume,
Had chosen thus to fling his soul
Upon the growing gloom.

So little cause for carolings
Of such ecstatic sound
Was written on terrestrial things
Afar or nigh around,

That I could think there trembled through
His happy good-night air
Some blessed Hope, whereof he knew
And I was unaware.

I wrote this poem because my part of America is often mocked for its lack of connection to the “traditional” Christmas of colder climes:

ANOTHER KIND OF CHRISTMAS

Whatever traditions you follow, or if you follow none at all, this is the season to Light Up the Darkness, so I wish you much brightness, good cheer and good company. Thank you for reading this vintage Word Cloud.

Nona Blyth Cloud has lived and worked in the Los Angeles area for over 50 years, spending much of that time commuting on the 405 Freeway. After Hollywood failed to appreciate her genius for acting and directing, she began a second career managing non-profits, from which she has retired. Nona has now resumed writing whatever comes into her head, instead of reports and pleas for funding. She lives in a small house overrun by books with her wonderful husband.
View all posts by wordcloud9 →
This entry was posted in Poetry, Word Cloud and tagged Another Kind of Christmas, Mary Oliver, Mistletoe, Snowblind, The Darkling Thrush, Thomas Hardy, White-Eyes. Bookmark the permalink.