Republic of the Congo – Martyrs’ Day

46 BC – Caesar’s Civil War, Roman province of Africa, Battle of Ruspina: Forces of the Optimates (“good men” – Roman Senate majority in favor of the Republic) led by Titus, and strengthened by the mobile cavalry of Juba I of Numidia, won a victory over Julius Caesar near Ruspina (exact location lost, area now in Tunisia) but Caesar kept the majority of his army intact, and was able to send messages calling for food and other supplies 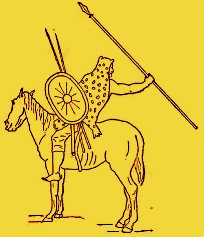 659 – Ali ibn Husayn Zayn al-Abidin born, the fourth Shia Imam; he spent most of his life secluded in Medina, devoted to asceticism and religious teachings, mostly in the form of invocations and supplications

871 – Viking Invasion of England, Battle of Reading: one of a series of battles during an invasion by the Danes into the Kingdom of Wessex, described in the Anglo-Saxon Chronicle. The Danelaw Vikings, under command of Bagsecg and Halfdan Ragnarsson, won a victory over the West Saxon forces led by Æthelred of Wessex and his brother Alfred, forcing the Saxons to retreat. But they quickly reformed their army and won the next battle, at Ashdown on January 8

1384 – King Razadarit ascends the throne of Hanthawaddy Pegu in what is now lower Burma. An able but ruthless military leader and administrator, during his reign (1384-1421) the kingdom was unified, and major assaults by the Ava Kingdom in the Forty Years’ War between the two kingdoms successfully repelled

1490 – Anne, Duchess Regnant of Brittany, married by proxy to Maximilian I of Austria, and fighting to maintain the independence of Brittany, declares that all those who would ally with King Charles VIII of France against her, are guilty of lèse-majesté; but in 1491, she is forced to renounce her unconsummated marriage to Maximilian, and marry Charles; when he dies in 1498, none of their children have survived infancy, and she is married to his cousin, Louis XII, who succeeds Charles. Louis falls deeply in love with Anne, who works to restore Brittany’s independence, and their eldest daughter Claude is proclaimed the heiress of Brittany, but none of their male children survive; Claude’s marriage to her cousin, King Francis I, ends Brittany’s independence 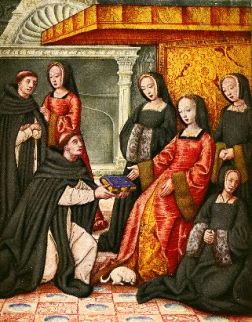 1493 – Columbus returns from his first voyage to the New World

1642 – English King Charles I arrives with soldiers to arrest five members of Parliament, accused by the king of treasonous collusion with the invading Scots army to put pressure on the Crown to accede to Parliament’s demands for reforms – but the five are forewarned, and slipped away by boat – this unprecedented invasion of the House of Commons by an English sovereign to arrest its members turns Parliament completely against him, and they quickly seize control of London, forcing Charles to flee the capital

1649 – The ‘Rump’ Parliament, purged of members opposed to trying English King Charles I for high treason, passes an ordinance to set up a High Court of Justice to try Charles in the name of England’s people

1717 – The Dutch Republic, France and Great Britain sign the Triple Alliance treaty which makes them allies against Spain’s growing power

1746 – Benjamin Rush born, American physician, politician and signer of the Declaration of Independence

1785 – Jacob Grimm born; with his brother Wilhelm, the co-author of Grimm’s Fairy Tales

1797 – William Beer born, German astronomer who made the first map of the Moon

1847 – Samuel Colt sells his first revolver to the U.S. government

1853 – After being kidnapped and sold into slavery in the American South, Solomon Northup regains his freedom; his memoir Twelve Years a Slave will become a bestseller

1864 – Clara Emilia Smitt born, Swedish doctor, and one of Sweden’s first women’s rights activists; she first trains as a nurse, and receives a Red Cross medal for her work during the Greco-Turkish War in 1897; after further study, she becomes a hydrotherapist, and then studies medicine abroad; author of Kvinnans ställning i samhället: några inlägg i nutidens sociala spörsmål (Women’s position in society: a few notes about contemporary social questions)

Two Figures on a Shore, Swanage – by Augustus John

1883 – Johanna “Hans” Westerdijk born, Dutch plant pathologist, also conducts research on moss regeneration, and was co-discoverer of the fungus which causes Dutch Elm Disease; first woman professor in the Netherlands, at the University of Amsterdam

1884 – The Fabian Society, dedicated to advancing the principles of democratic socialism via gradual reform efforts in democracies, rather than by revolutionary overthrow, is founded in London UK; named for the Roman general Fabius Maximus (nicknamed “Cunctator”, meaning the “Delayer”) whose Fabian strategy against Hannibal’s Carthaginian army of wearing the enemy down by harassment and attrition rather than head-on battles ultimately brought victory

1889 – It is announced that the Oklahoma Land Run, opening two million acres of Oklahoma Territory to ‘first come first serve’ settlers will take place on April 22, 1889

1900 – James Bond born, American ornithologist and expert on birds of the Caribbean; author of Birds of the West Indies; Ian Fleming was a keen bird watcher and was familiar with Birds of the West Indies, so he contacted Bond about using his name for his fictional hero, and Bond replied he was “fine with it.” In 1964, Ian Fleming gave the ornithologist a first edition copy of You Only Live Twice signed, “To the real James Bond, from the thief of his identity”

1901 – C.L.R. James born, Trinidadian historian, journalist, socialist and political activist; an influential pioneer in post-colonial letters. Author of World Revolution,  Minty Alley, which was the first novel by a black West Indian published in Britain, and The Black Jacobins, a history of the Haitian Revolution. His book on the game of cricket, Beyond a Boundary, is often named as the best single book on any sport ever written

1928 – NBC Radio debuts The Dodge Victory Hour which stars Will Rogers, Paul Whiteman and his Orchestra, and singer Al Jolson

1933 – Phyllis Reynolds Naylor born, American juvenile author; her Shiloh quartet of novels won the 1992 Newbery Award and the Mark Twain Readers Award; her Alice books series, while lauded for realism in portraying a motherless girl, have also been frequently challenged and banned, primarily for broaching the topic of sexuality in teenagers; she founded the PEN/Phyllis Naylor Working Writer Fellowship

1935 – Bob Hope debuts on network radio on The Intimate Revue

1944 – Angela Harris, Baroness Harris of Richmond, born, British Liberal Democrat life peer; Deputy Speaker of the House of Lords since 2010; Chair and Trustee of the Industry and Parliament Trust

1948 – Burma gains its independence from the United Kingdom

1948 – Cissé Mariam Kaïdama Sidibé born, first woman Prime Minister of Mali (2011-2012); in a March 2012 coup d’état, she and other minsters were detained by junta forces hostile to Malian President Amadou Toumai Touré; Amnesty International reported that the ministers were being held at a military camp in the Koulikoro region of Mali. They were released in April. In 2015, Cissé Mariam Kaïdama Sidibé was appointed as ambassador for the Niger Basin Authority (NBA), for their Climate Investment Plan to help improve the lives of the people who depend on the Niger River, to mitigate the effects of climate change, and insure that the best development choices are made

1953 – Ichthyologist J.L.B. Smith of Rhodes University, South Africa, examines a rare 120- pound Coelacanth, the oldest known living lineage of Sarcopterygii (lobe-finned fish and tetrapods), caught in the Comoros Islands by the crew of Captain Eric Hunt’s schooner; a species thought extinct until a specimen was discovered in 1938 by Museum curator Marjorie Courtenay-Latimer

1955 – Cecilia Conrad born, American economist and academic; dean of Pomona College in California (2009-2012); Managing Director of the John D. and Catherine T. MacArthur Foundation since 2013; President of the International Association for Feminist Economics (IAFFE – 2008-2009); current editor of The Review of Black Political Economy, which was founded in 1970; her research centers on the effects of race and gender on economic status; co-editor of African Americans in the U.S. Economy 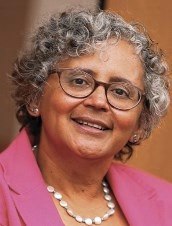 1956 – Zehava Gal-On born, Israeli Meretz politician; member of the Israeli legislature, the Knesset (1999-2017); chair of the Meretz political party (2012-2018). Meretz is a secular, left-wing, social-democratic, and green party. Gal-On has been particularly concerned with human rights, women’s rights and social justice issues. She served as chair of the Knesset committee against trafficking in women (1999-2000)

1956 – Sarojini Sahoo born, Indian feminist author, columnist for The New Indian Express, and associate editor of the English-language magazine Indian AGE; her novel Upanibesh (Colony) was a pioneering work in Odia (an Indo-Aryan language) on sexuality as a part of women’s social revolt; Gambhiri Ghara (The Dark Abode), a story of the relationship between an Indian Hindu woman and a Muslim man from Pakistan, against a background of terrorism

1965 – In his State of the Union address, U.S. President Lyndon Johnson outlines the goals of his “Great Society”

1972 – Rose Heilbron becomes the first British female judge, at London’s Old Bailey. She was one of the first generation of female barristers, called to the Bar in 1939. Her practice was crime and personal injury. In 1949, just months after the birth of her daughter, she became one of the first two female King’s Counsel at the Bar (now Queen’s Counsel). Rose Heilbron was the first woman to lead in a murder case, and the first woman leader of a circuit (the Northern Circuit in 1973). She was also the second woman to be appointed a High Court judge 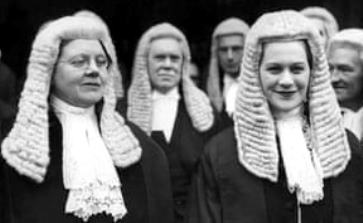 Helena Normanton on left, and Rose Heilbron on the right

1991 – The U.N. Security Council votes unanimously to condemn Israel’s treatment of the Palestinians in the occupied territories

2007 – The 110th United States Congress convenes, electing Nancy Pelosi as the first female Speaker of the House in U.S. history

Nona Blyth Cloud has lived and worked in the Los Angeles area for over 50 years, spending much of that time commuting on the 405 Freeway. After Hollywood failed to appreciate her genius for acting and directing, she began a second career managing non-profits, from which she has retired. Nona has now resumed writing whatever comes into her head, instead of reports and pleas for funding. She lives in a small house overrun by books with her wonderful husband.
View all posts by wordcloud9 →
This entry was posted in History, Holidays, On This Day and tagged Alicia Garza, Clara Smitt, James Bond, Louis Braille, Rose Heilbron, Sarojini Sahoo, Sir Isaac Newton. Bookmark the permalink.
Loading Comments...
%d bloggers like this: