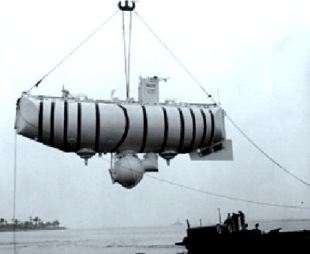 Into the Deep Day *

971 – In China, the war elephant corps of the Southern Han is soundly defeated at Shao by Song dynasty troops using crossbows

1264 – English barons are on the brink of civil war in 1263 with King Henry III over high taxes and the influence of foreigners at court, so both parties agree to submit the matter to arbitration by French King Louis IX, who is a firm believer in royal prerogative, and rules in favor of Henry, leading to the Second Barons’ War – The First Baron’s War (1215-1217) was against King John because he refused to abide by the Magna Carta) 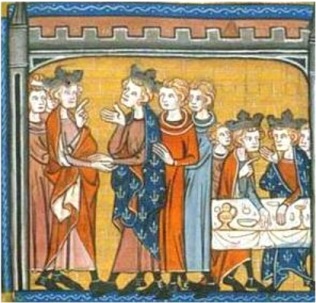 1368 – Zhu Yuanzhang ascends the throne as the Hongwu Emperor,  reigning from 1368 to 1398; founding emperor of the Ming dynasty, which rules over China for 276 years

1546 – After eleven years, François Rabelais publishes the Tiers Livre, his sequel to Gargantua and Pantagruel

1556 – The deadliest earthquake in history, the Shaanxi earthquake, hits Shaanxi province, China. The death toll may have been as high as 830,000,
and the devastation affects a 520 mile (840 kilometre) area

1570 – James Stewart, 1st Earl of Moray, regent for the infant King James VI of Scotland, becomes the first person assassinated by a firearm in recorded history

1571 – The Royal Exchange, the centre of commerce for the City of London, opens in London, founded by merchant Thomas Gresham on a site provided by the City of London Corporation and the Worshipful Company of Mercers 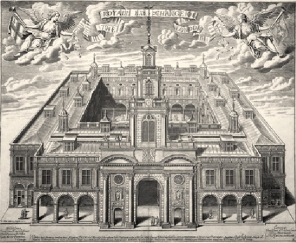 1656 – Blaise Pascal publishes the first of his Lettres provinciales

1795 – After an extraordinary charge across the frozen Zuiderzee, the French cavalry captured 14 Dutch ships and 850 guns, in a rare occurrence of a battle between ships and cavalry 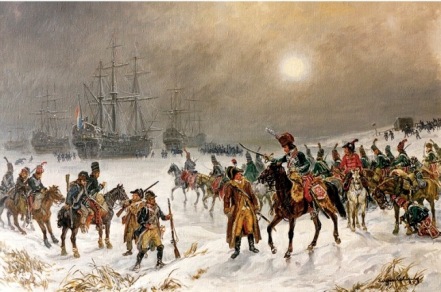 1813 – Camilla Collett born, Norwegian writer, an early contributor to Norwegian literary realism, and a pioneer in Nordic feminism; Amtmandens Døtre (The District Governor’s Daughters) is her only novel; her marriage was a happy one, but only lasted 10 years before her husband died unexpectedly, leaving her with four young sons, and plunging her into near-poverty for the rest of her life; after his death, she wrote essays, literary criticism, polemics and her memoirs; her polemics call for social and political change to expand women’s education and opportunities, opposing bringing up girls to be reticent and self-sacrificing 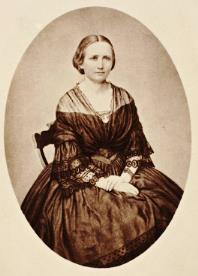 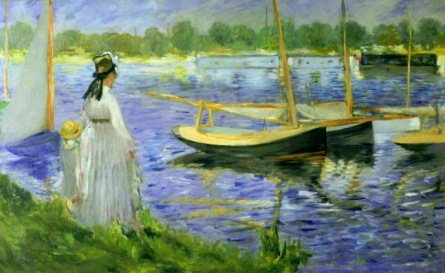 Banks of the Seine at Argenteuil, by Edouard Manet

1845 – The U.S. Congress established the first Tuesday after the first Monday in November as the day for all national elections

1846 – Slavery in Tunisia is abolished

1862 – Agoston Haraszthy de Mokcsa brings 1,400 varieties of grapevines from Europe to California, and plants the first large vineyard in California in the Sonoma Valley. After the phyloxera blight destroyed much of Europe’s vineyards, some of these same vines, now on resistant American root stock, helped save the European wine industries 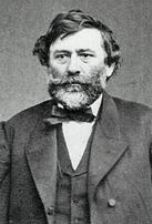 1870 – Marias Massacre: in Montana territory, U.S. Cavalry troops murder at least 173 Piegan Blackfeet, mostly women, children and elderly men. They assumed the people in the camp were Mountain Chief’s band, but they were Chief Heavy Runner’s band, which had been promised protection by the United States. Public outrage caused a shift toward a somewhat more peaceful policy, and a decision to keep the Bureau of Indian Affairs in the Department of the Interior, instead of returning it to the control of the War Department as the military was insisting

1879 – Anglo-Zulu War: what had been a Swedish Mission at Rorke’s Drift was taken over by British troops as a hospital and supply base. Two survivors of the massacre at Isandlwana arrived at Rorke’s Drift at 3:45 on the afternoon of January 22 to warn the garrison, consisting of only 150 British and colonial troops, of the disaster, and warm them that the Zulus were now headed their way. Over 2,000 Zulu warriors began their attack at 4:30 in that afternoon, which continued until 4:00 in the morning, but the British held their position. On the second day, the battle ended with the Zulus leaving. 350 Zulus were killed by rifle fire or bayonets, and hundreds more were wounded 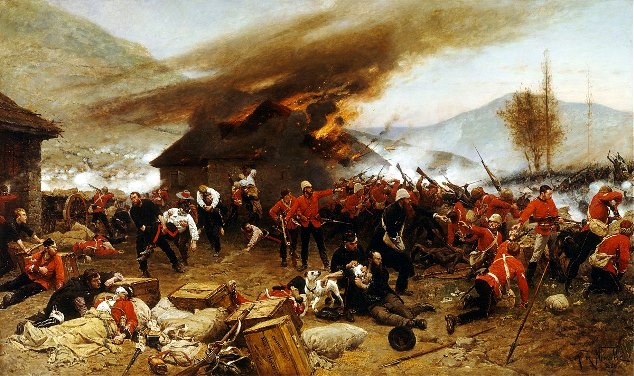 The Defence of Rorke’s Drift, by Alphonse de Neuville(1880)

1894 – Jyotirmoyee Devi born, Indian writer born in Jaipur; while she had very little formal education, she was allowed to read whatever she liked in her grandfather’s well-stocked library. She didn’t begin writing until after the death of her husband in 1918 during the world-wide influenza epidemic, when as a Hindu she had to return to her parents’ house with four of her children and into enforced seclusion, while one child remained with her husband’s family. After reading John Stuart Mill’s On the Subjection of Women, she remained conservative in her behavior, but vowed to treat her daughters and sons equally, and wrote some non-fiction on the rights of women and the Dalits (so-called ‘untouchables’), but she is best known for her short stories, mostly about women, inspired by her childhood in Jaipur, or set in the section of the Bengal region which is now Bangladesh, which feature her understated dry wit and sharp sociological observations

1897 – Margarete Schütte-Lihotzky born, first female student at Vienna’s arts school,  Kunstgewerbeschule, and first woman Austrian architect; designed affordable council housing for the working classes; she also collaborated with Adolf Loos on settlements for WWI invalids and veterans, and worked for the Austrian Association for Settlements and Small Gardens; the city council of Frankfurt am Main hired her for the Frankfurt Project, for which she designed the Frankfurt Kitchen, a prototype for the built-in kitchen, one of her most notable achievements; she was a communist activist during WWII in the German resistance to the Nazis 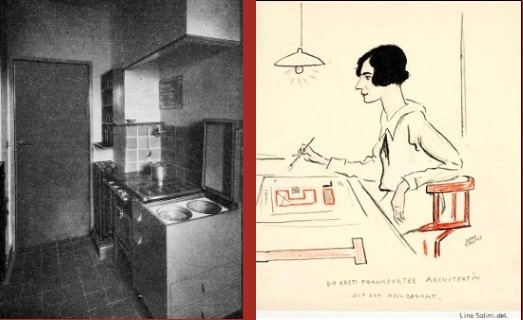 The Frankfurt Kitchen and a caricature of Schütte-Lihotzky from 1927, by Lina Salini

1897 – Ieva (or Ewa) Simonaitytė born, Lithuanian writer, noted for her representation of the minority Lithuanian population in the territories of German East Prussia, and her best-known novel, Aukštujų Šimonių likimas (The Fate of Šimoniai from Aukštujai) 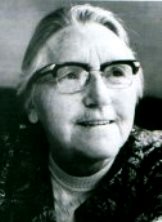 1898 – Freda Utley born, English author and pro-labor activist; married a Russian in 1928 and moved to Moscow; she escaped with their son after her husband’s arrest in 1936 – she used all her British contacts to try to find her husband and secure his release, not learning he had died in 1938 until 1956 – became virulently anti-communist 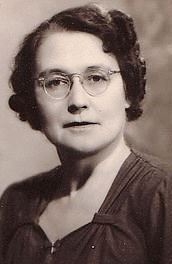 1899 – After the ‘Malolos’ Constitution is enacted, Emilio Famy Aguinaldo, a revolutionary leader, becomes the first President of the Philippines 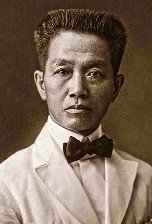 1907 – Charles Curtis (R-KS), whose mother was of the Kaw Nation, becomes the first American Indian U.S. Senator; in March 1929, he leaves the Senate to be sworn in as Herbert Hoover’s Vice President

1909 – The White Star line passenger ship RMS Republic collides with the SS Florida off the coast of Massachusetts, and sends the first CQD (predecessor to SOS) distress signal – six people are killed, but 1500 lives are saved before the ship sinks the next day

1909 – Tatiana Proskouriakoff born in Russia, American archaeologist and scholar who prepared reconstructive drawings of Mayan buildings that are now in ruins, and contributed significantly to the deciphering of Mayan hieroglyphs, the writing system of pre-Columbian Maya civilization, by demonstrating that the hieroglyphs on monumental stela and buildings were historical records of Maya rulers’ births, accessions and deaths rather than imagistic prophecy, then demonstrating a sequence of seven rulers over a 200 year span

1912 – The International Opium Convention, the first international drug control treaty, is signed at The Hague in the Netherlands

1918 – Gertrude B. Elion born, American pharmacologist, co-recipient of the 1988 Nobel Prize in Medicine for development of drugs to treat leukemia, gout and malaria, as well as drugs used in organ transplants to help prevent transplant rejection 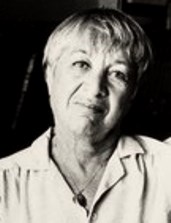 1941 – Charles Lindbergh testifies before the U.S. Congress and recommends that the United States negotiate a neutrality pact with Adolf Hitler

1941 – Lady in the Dark, a musical with lyrics by Moss Hart and music by Kurt Weill, debuts on Broadway 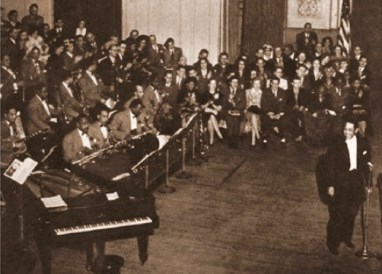 1950 – The Knesset resolves that Jerusalem is the capital of Israel

1950 – Suzanne Scotchmer born, American Professor of Law Economics and Public Policy at the University of California, Berkeley; noted for many publications on subjects ranging from intellectual property to game theory; one of the leading and most prominent experts in patent law and incentives for Research and Development, she was frequently an expert witness in patent cases. Her death in 2014 was caused by cancer 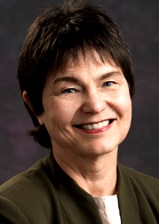 1957 – American inventor Walter Frederick Morrison sells the rights to his flying disc to the Wham-O toy company, which renames it the “Frisbee” 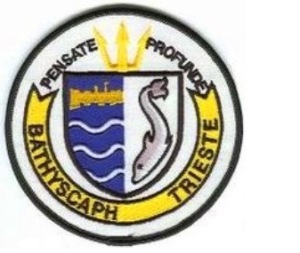 1962 – Elvira Lindo born, Spanish broadcast journalist, scriptwriter and novelist; noted for her book Manolito Gafotas, based on one of the characters she developed for a radio serial; currently living in New York City with her husband Antonio Muñoz Molina, director of the Instituto Cervantes of New York. She is a contributor to the Spanish-language newspaper, El País 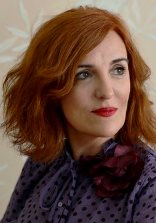 1963 – Three million gallons of soybean oil flooded streets in Mankato, Minnesota when a storage tank ruptured. Eventually the oil ended up in the Mississippi River. In the spring, more than 10,000 ducks were found dead in the wetlands along the river

1964 – Mariska Hargitay born, American actress, director and executive producer; noted as the founder in 2004 of the Joyful Heart Foundation, which provides support to survivors of sexual abuse 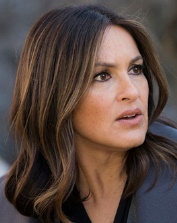 1964 – Bharrat Jagdeo born, Guyanese People’s Progressive Party politician; since 2015, Leader of the Opposition in the National Assembly; President of Guyana (1999-2011); Prime Minister of Guyana (1999-1999); President pro tempore of the Union of South American Nations (2010-2011) and a leader in sustainable development, green growth and mitigating climate change

1973 – The Exorcist opens, with Mike Oldfield’s “Tubular Bells” playing during the opening credits 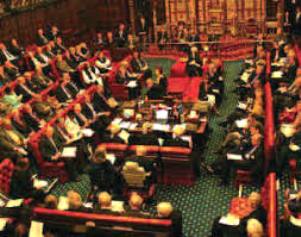 2008 – The California Coastal Commission argues in Federal Court that President George W. Bush violated the U.S. Constitution’s separation-of-powers doctrine when he issued an Executive Order directly contradicting a federal judge’s court order restricting the Navy’s use of a type of sonar linked to the death of marine mammals within 12 miles of the coast or around Santa Catalina and San Clemente Islands 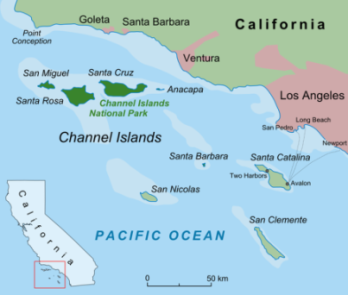 2010 – The American Civil Liberties Union (ACLU) condemns a U.S. Justice Department report that suggests 47 Guantánamo Bay detainees should be held indefinitely without trial. The Justice Department says the men are too dangerous to release, but couldn’t be tried because the evidence against them was either too flimsy or had been coerced from the prisoners, and would not stand up in a U.S. court. “If there is credible evidence that these prisoners are dangerous, there is no reason why that evidence could not be introduced against them in criminal trials,” said Jameel Jaffer, director of the ACLU National Security Project. He said if the evidence had been “tainted” it was “not evidence at all.” The U.S. Justice system, he added, “excludes coerced evidence not only because coercion and torture are illegal, but because coerced evidence is unreliable.” As of October, 2018, there were still at least 40 prisoners detained by the U.S. government at Guantanamo Bay. Of the 40 confirmed detainees, all of them have been imprisoned for over ten years 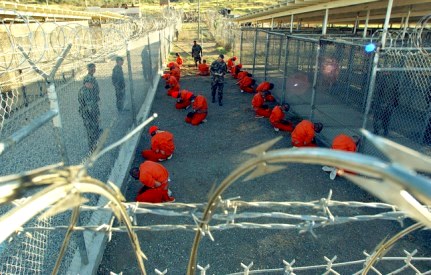 Nona Blyth Cloud has lived and worked in the Los Angeles area for the past 50 years, spending much of that time commuting on the 405 Freeway. After Hollywood failed to appreciate her genius for acting and directing, she began a second career managing non-profits, from which she has retired. Nona has now resumed writing whatever comes into her head, instead of reports and pleas for funding. She lives in a small house overrun by books with her wonderful husband.
View all posts by wordcloud9 →
This entry was posted in History, Holidays, On This Day and tagged Bharrat Jagdeo, Duke Ellington, Edouard Manet, Elvira Lindo, Florence Rush, Jyotirmoyee Devi, Tatiana Proskouriakoff. Bookmark the permalink.
%d bloggers like this: