A Poem for Winslow Homer Day

Hannah Fries: the first collection of her poems, Little Terrarium, was published by Hedgerow Books in November 2016. “Sea Paintings” is a series of  her poems, each inspired by a specific Winslow Homer painting.  Fries is a recipient of a scholarship from Bread Loaf Writer’s Conference, and some of her work has appeared in American Poetry Review and Drunken Boat. She is a project editor at Storey Publishing, and a contributing editor for Terrain.org 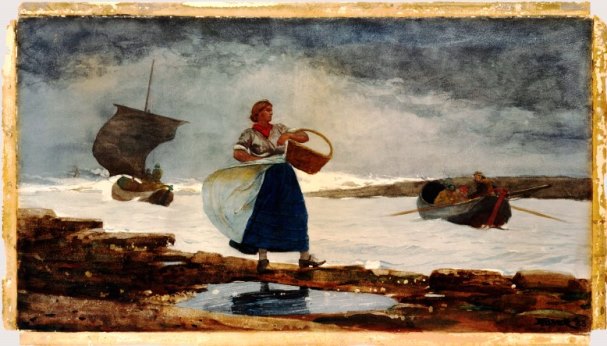 Inside the Bar, Cullercoats

Apron blooming in the wind, a jib, she’d
fly wing and wing if let unmoored
from the stolid rock, left foot jutting
toward the waves, hand on a hip,
and at her throat a red scarf like a life
welled up against its gray backdrop.
Behind her the boat takes her profile, stiff
billow braced for the sea’s thrash but less
sure than she, on this spit of rock, waiting
for the catch—blank waters at her back,
at her feet a steely pool that holds her
shadow, left by the tide. Wide sweep
of storm clouds. On her arm hangs a basket
to catch what diminished light seeps through.

Nona Blyth Cloud has lived and worked in the Los Angeles area for the past 50 years, spending much of that time commuting on the 405 Freeway. After Hollywood failed to appreciate her genius for acting and directing, she began a second career managing non-profits, from which she has retired. Nona has now resumed writing whatever comes into her head, instead of reports and pleas for funding. She lives in a small house overrun by books with her wonderful husband.
View all posts by wordcloud9 →
This entry was posted in Art, Poetry and tagged A Poem for Winslow Homer Day, Hannah Fries, Inside the Bar Cullercoats, Sea Paintings, Winslow Homer. Bookmark the permalink.
Loading Comments...
%d bloggers like this: